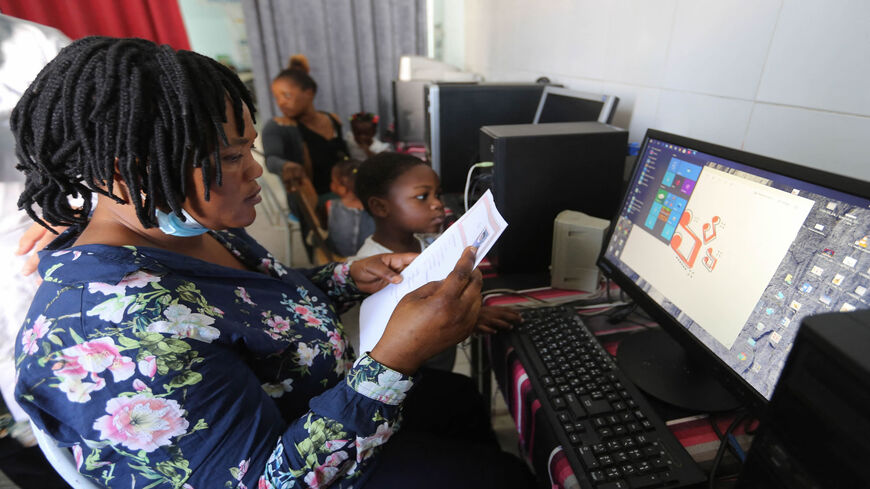 Sub-Saharan migrant women learn how to use a computer at a center run by the Organization for the Support of Migrants, Medenine, Tunisia, June 15, 2021. - Fathi Nasri/AFP via Getty Images

TUNIS, Tunisia — Civil society and student organizations have sounded the alarm on the sharp rise of arbitrary arrests and police violence against people of sub-Saharan origin, especially as food shortages contribute to a socio-economic pressure cooker.

President of AESAT Christian Kwongang described a wave of arrests beginning back in November with the arrest of a female student sentenced to two weeks in prison. Kwongang told Al-Monitor, "We have counted approximately 300 arrests of sub-Saharan people including students around the municipality of Ariana [in Greater Tunis]."

were common. He added, “They have rounded up students from Esprit University, with some as young as 18.”

Modeste Coucou, a 25-year-old from Benin, currently doing an internship in informatics management in Tunis, told Al-Monitor that he suffered a humiliating arrest Feb. 1.

It is not just police violence that sub-Saharans in Tunisia fear. Kwongang Al-Monitor has also witnessed open aggression in the streets from young Tunisian men toward their peers of sub-Saharan origin, resulting in

Head of AESAT’s council Mamady Kalle told Al-Monitor that since publishing the figures of arbitrary arrests in Tunis, and although there had been some reduction in arrests in Ariana overall, the crisis has worsened with a rise of arrests in other cities, particularly Nabeul in Cap Bon, which is a major trafficking port for those trying to emigrate informally to Europe. Kalle said that the current food shortages in Tunisia began some weeks ago and have recently worsened due to the Ukrainian war. Circumstances have become “very complicated” for sub-Saharans in general, he said. “We cannot get food. Sub-Saharans eat a lot of rice and there are shortages; shopkeepers hide the rice and either refuse to sell to [Black] foreigners or just give us one packet."

The Lionheart for Humanity association is currently running a series of open dialogue events supported by the Kamel Lazar Foundation at their B7L9 Art Station in the working-class neighborhood of Bar Lazreg in Tunis. Through this series of events participants are trying to dissolve barriers and prejudices in order to open up a cultural space of interaction between people of diverse origins, including the sub-Saharans, and the local community, particularly indigenous white-identifying Tunisians, within a safe space in order to build trust and respect between communities.

A member of Lionheart for Humanity spoke to Al-Monitor on condition of anonymity about the word "migrant." She said, “We call ourselves ‘chercheurs' [seekers]. We try to explain what that means. We are looking for something — a better life.” She described the daily trials of being a woman of sub-Saharan origin in Tunisia, noting, “They call us things like ‘Black slave’ or ‘You're dirty.' It’s not just the violence, it is the total physical economy. They pay us less or not at all. When I take the metro I’m afraid [of being arrested]. I'm stressed all the time.”

Vice President of Lionheart for Humanity Cecile Onana told Al-Monitor that she originally came to Tunisia to study, but after a while could not afford to pay her tuition fees. "We have to pay in euros,” she said, noting that she worked odd jobs to try to make ends meet. She explained that going home is problematic, not just financially but because of social expectations from family and friends to be “a success.” Instead, she and her Lionheart colleagues are trying to make the best of their lives, but getting a “carte sejour” (residency card/work permit) costs a lot of money. She added, "But despite having an association and being part of Tunisia’s normally powerful civil society, at our level we cannot enter into dialogue with the authorities.”

AESAT, which negotiates with the authorities, claims that the community is under surveillance and that phones are tapped. “People are afraid to use their phones — afraid that if they use their phones they will be arrested,”

Monica Marks, assistant professor of Arab Crossroads Studies at New York University in Abu Dhabi, has been documenting and writing about Tunisia for over 11 years. She told Al-Monitor, “The police are more unleashed than ever, and there is a widespread but routinely unacknowledged downplaying of prejudices against sub-Saharans that is reflected within the police force.”

“It’s a very serious situation. These arrests were just of only Black students,” said Arij Djelassi, project coordinator for Arthemis. He told Al-Monitor, “The Ministry of Interior has not communicated the number of arrests to the [relevant] embassies.”

Al-Monitor attempted to contact a number of private universities, but most did not respond or refused to comment. However, Sesame University’s communications officer told Al-Monitor on condition of anonymity

don’t want to get vaccinated and

“Our members have been vaccinated.”

Marks warned that these recent events must be taken seriously. She fears that President Kais Saied’s populist narrative and railing against his political enemies is taking a turn toward something more dangerous. “Microbes, viruses" — that is very fascistic language. "When you hear language of purification of human beings, that should trigger anyone who cares about living in a pluralistic society with a baseline of human rights. It is a telltale warning sign that you will have violent extremism in your future,” she concluded.