Although Beirut is one of the most LGBT-friendly cities in the region, there are still some limitations that don’t allow the community to express themselves freely. 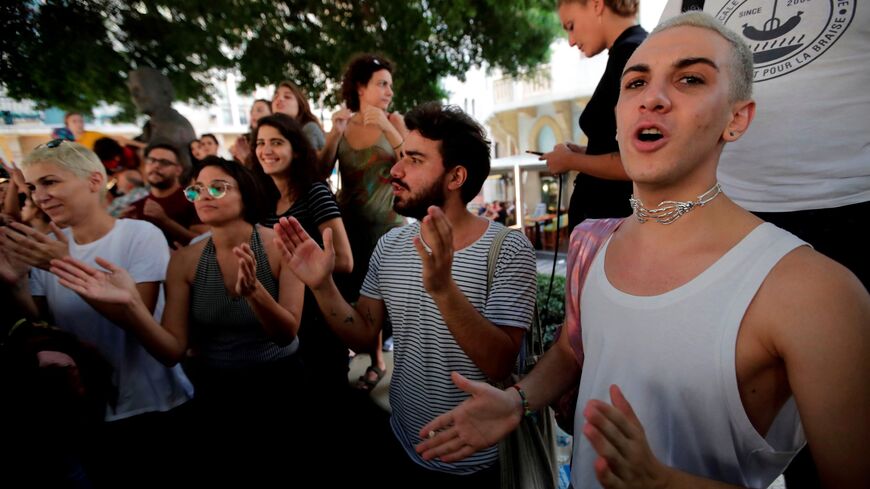 BEIRUT, Lebanon — On a sofa in a dimly lit bar, two young women finish their beers while they caress each other's hands. Oblivious to the music, to the people who enter and leave, they look at each other as if they were the only inhabitants of the city. But as they cross the threshold, they undo their intertwined fingers. The darkness no longer protects them, and they must disguise their chemistry.

After all, they are in Lebanon — although Beirut, with its thousand nuances, is something like an oasis for them. Members of the LGBT community know very well which are the safe spaces to flirt, love and express themselves, but still the streets are hostile to them.

“Queer people have existed in Lebanon for a long time, but they just navigate differently,” said Tarek Zeidan, director of Helem. This organization, which means dream in Arabic, claims to be the first one in the region created to defend LGBT rights 22 years ago. “The first rainbow flag raised in the Arab world was in 2003 in Beirut during a protest against the US invasion of Iraq,” he told Al-Monitor. Seventeen years later, the Lebanese capital continues to be a refuge for those outside the hetero norm.

At certain bars, cafes, nightclubs and NGOs in Beirut, members of the LGBT community escape the conservatism and homophobia that often permeate Arab societies. “Lebanon has a long history of queer visibility in its media, in its folklore, in its narrative,” Zeidan said. “This has allowed the Lebanese to realize that queer people exist.” In 2017, the small Mediterranean country was the first to celebrate an LGBT pride week, although pressure from influential religious elites prevented subsequent observances.

Homosexual relationships in Lebanon are punishable by law. Article 534 of the Penal Code, inherited from colonizing France, establishes a prison sentence of up to one year for those who have sexual relations that “contradict the laws of nature.”

Around 2009, some Lebanese judges began to realize that "defining those laws of nature does not only imply being heterosexual, you can be homosexual by nature,” said Elsy Sayegh of Mosaic organization. This NGO helps LGBT people to live a better life in Lebanon and even to leave the country in extreme situations. “Even though our country is a bit more welcoming than our neighbors when it comes to queer rights, the majority looks for a way to flee Lebanon,” she said.

The Lebanese economic crisis has a more pronounced effect on already vulnerable groups. “The situation has never been worse,” Zeidan told Al-Monitor. “We are suffering violations of our economic and social rights as Lebanese but aggravated by the fact that we are a group marginalized by our gender identity and expression.”

The explosion in the port of Beirut in August 2020 had a vicious impact on the neighborhoods of Mar Mikhael, Karantina and Gemmayze, home to a large part of the LGBT community.

Most of the members of the community are unemployed and have difficulties accessing food, medicines and dignified housing conditions. Relief agencies and the government usually prioritize traditional families for humanitarian aid, leaving queer couples and individuals behind. An OXFAM report published in June 2021 pointed out that 70% of those members of the community surveyed lost their job in the past year. Also, there is a worrying mental health crisis among the LGBT community in Lebanon, exacerbated by the exodus of health professionals.

In 2021 alone, Helem processed more than 4,000 incidents of violations, risk and/or humanitarian needs. Compared to previous years, there was an increase of 667% of total incidents recorded. Queer Syrian refugees also suffer higher risks of blackmail along with increased vulnerability. Other groups such as trans people or non-binary people are suffering too.

“It’s the survival of the fittest,” said Sasha Elijah, the first trans model in Lebanon. “I never waited for anyone's acceptance to live my truth,” she told Al-Monitor. “Occupying a space as the first Armenian-Lebanese trans model has given greater visibility to the problems of trans people, but visibility without protection is a trap. We should not pay with our lives to fight for our rights.”

The demonstrations in the fall of 2019 included "the first LGBT pride march in the Arab world,” Zeidan said.

“The revolution helped the LGBT community in Lebanon a lot because the acceptance of the other was defended,” says Sayegh. The streets of the whole country became for a few months safe places in which everyone could express themselves freely.

In some corners of Beirut this freedom is still treasured. “This city is a place where you can more easily navigate as queer because a lot of people who live in the capital are from villages and in Beirut, they don't have a sense of being under the scrutiny of their community,” explained Zeidan.

“If this is a place where people come to express themselves freely, there could be a massive economic benefit using freedom of expression as a claim for our country,” Zeidan said. “I keep fighting because there is something to fight for.”