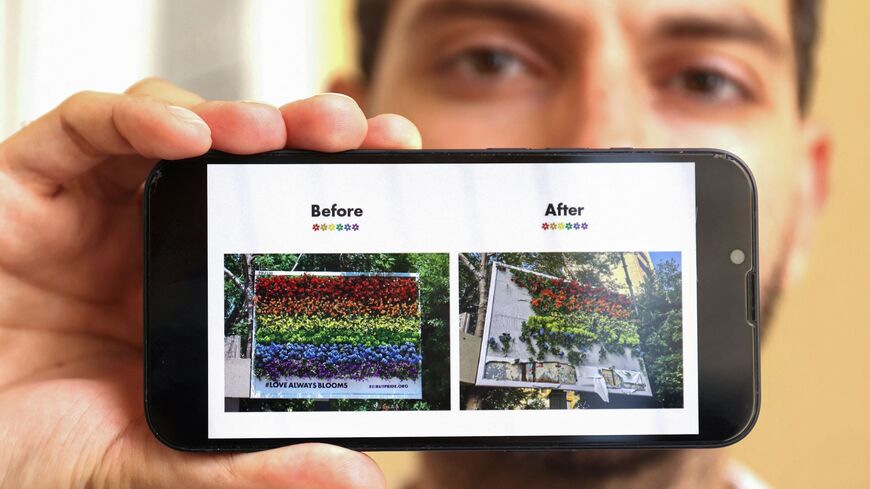 Hadi Damien, 33, the initiator of "Beirut Pride," shows pictures on his telephone of a billboard featuring blooming flowers in the colors of a rainbow before and after it was destroyed during an interview in Lebanon's capital Beirut on July 1, 2022. - ANWAR AMRO/AFP via Getty Images

Mahmoud does not live in Lebanon anymore. When he came back for his summer vacation, he found a more hostile country than the one he left a year ago. Coming out to his parents was never part of his plans, but hearing his dad saying that “all gay people have to die” forced him to make a decision. “It is impossible for them to understand me, so I give up, I don’t want them in my life,” Mahmoud told Al-Monitor.

Being queer in Lebanon is getting more dangerous by the day. That is why Mahmoud did not give his real name. Despite feeling safer in the European country where he now lives, he, as many other members of the LGBTQ community, does not want his identity to be revealed in Lebanon. “People are scared and activists are scared to carry out activities as they used to,” said Rasha Younes, a Human Rights Watch LGBT researcher in the MENA region.

Things were already tough for this vulnerable community, but an urgent letter sent by Interior Minister Bassam al-Mawlawi on June 24 reinforced its fear and insecurity. Al-Mawlawi instructed the directorates of Internal and General Security to ban any gatherings aimed at “promoting sexual perversion” because they violate “customs and traditions” and “principles of religion.” Later on, the minister said the decision was a response to religious groups asking to his ministry to “reject the spread of this phenomenon.”

After the letter was released, many groups took a stand in defense of LGBT rights. “The United Nations is concerned about the rising hate speech, discrimination, and violence toward LGBTIQ individuals and organizations in Lebanon,” declared UN Lebanon in a joint statement. International and local organizations such as Amnesty International, HRW or the Samir Kassir Foundation gathered in the Coalition to Defend Freedom of Expression in Lebanon.

“Despite the crackdown, we have seen unprecedented mobilization with us,” said Zeidan. The Lebanese Psychiatric Association released a statement reading, “As psychiatrists, we would like to clarify that homosexuality cannot be considered a disease that requires treatment.”

“The religious establishment and their agents in the current government launched a hate speech campaign but this is not just about queer people,” said Tarek Zeidan, director of Helem, one of the leading organizations in the region fighting for LGBT rights. Zeidan said, “The community is being used as a scapegoat to move attention away from the socioeconomic conditions.”

Both members of the community and international and local organizations say the attack has bigger aspirations. More than 80% of the country’s residents do not enjoy basic rights including health, education and an adequate standard of living, according to the United Nations. “During crises like this one, we have seen officials using the rights of the LGTBQ community as scapegoats,” Younes said.

“Authorities are targeting their activities to affirm that they as institutions are doing something, even though they have been failing to implement reforms,” the HRW researcher told Al-Monitor. This public discourse has had consequences already.

A hate speech social media campaign is inciting violence, with threats and calls to ban their events by force. The peaceful march against the ban announced for June 26 had to be postponed. “It received so many death threats and there was a possibility of counter protest while the government wasn’t interfering to offer any protection,” said Younes.

Lebanon was once seen as a safe haven for the queer community. Since 2009, judges from lower courts have declined to convict many gay and transgender people under Article 534, which criminalizes “any sexual intercourse contrary to the order of nature.”

For such a vulnerable community, the new trend is dangerous. From 2012 to 2016, the number of arrests under Article 534 jumped from 43 to 76. When Lebanon hosted its first and last Pride march in 2017, it was repressed by the authorities. Beirut Pride’s organizer, Hadi Damien, was arrested.

“Lebanon is no longer a safe haven for activists and communities,” Younes told Al-Monitor. “This sends a chilling effect to the LGBTQ community telling that their forms of expression and form of being aren't recognized and, at the same time, the government is not offering protection to them,” the HRW researcher declared.

“LBTQ people are going to experience harassment and abuse in their families because of how this is being managed in the public scene,” said Zeidan. Mahmoud is one of those activists. His own former home is no longer a safe space. “I am happy I am not living in Lebanon anymore, but coming back wakes up all these ghosts and fears,” he told Al-Monitor.

This crackdown is impacting the general state of freedoms and liberties in the country. “Freedom of expression, assembly and association for marginalized groups is threatened,” said Younes. “We have seen this crackdown also on activists and journalists, on people who are being called out just for speaking up and saying their opinion,” she added.

But the Lebanese queer community is not alone in this fight. “This is a global crackdown on personal rights and progressive ideas,” said Zeidan. As the LGBTQ community resists, the authorities are sending them another message. “The government is telling them that their rights are not welcomed in Lebanon, and they are willing to throw away their fundamental rights if others, such as religious groups, ask,” Younes told Al-Monitor. “They want LGBT people to stay hidden and not organize,” she concluded.