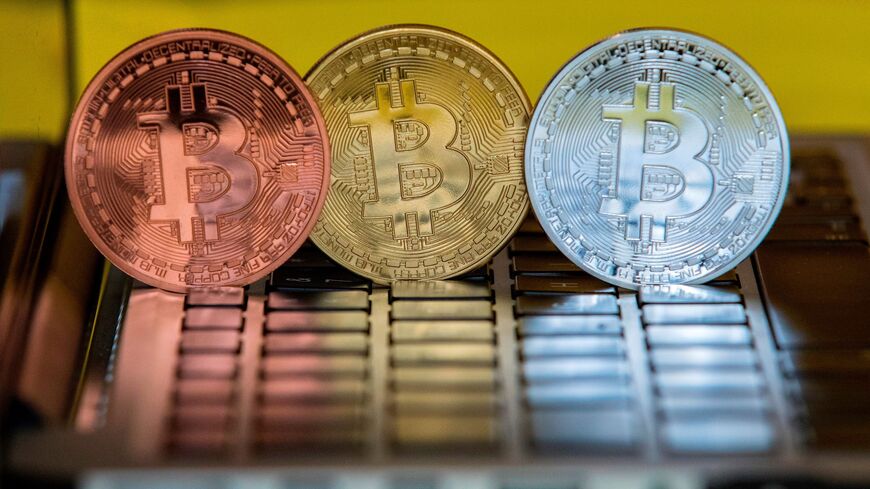 A picture taken on Feb. 6, 2018 shows a visual representation of the digital crypto-currency Bitcoin, at the "Bitcoin Change" shop in the Israeli city of Tel Aviv. - ACK GUEZ/AFP via Getty Images

Global commerce in cryptocurrency poses regulatory and other challenges for monetary authorities in various countries, and friction. In Israel, the Capital Authority — the governmental body responsible for managing the capital market, the exchanges, currency exchanges, and more — recently stopped the trade of the giant international crypto exchange Binance.

The authority, which is responsible for licenses for groups working in crypto, is asking Binance to clarify the types of services it provides for Israelis and the licenses under which it operates.

According to reports, most groups active in the stock exchange field have applied for a license to operate in Israel by force of a permit to continue trade. By contrast, Binance (a relatively new player in the country) never submitted an application.

Binance is one of the most popular exchanges in Israel, and although it is international, it created platforms in Hebrew targeted to Israelis. It is estimated that 200,000 Israelis have made transactions on its marketplace; its fast interface suits the Israeli fast-track/high-tech modus operandi.

The Capital Authority’s inquiry is meant to check, among other things, whether Binance’s failure to meet Israeli regulations makes it difficult for investors to return funds into the financial system in Israel.

Reportedly, the Binance exchange has encountered difficulties working with local regulators in many countries, and a few weeks ago it was banned in Britain until it arranges the necessary licenses. It is the largest crypto exchange in the world, with 30 million registered clients and a complex ownership structure, and its BNB coin has a market value of $70 million. It was founded in China is 2017 by one of the richest people in the world, Changpeng Zhao, but moved when Chinese authorities prohibited crypto activity.

Binance seeks to be decentralized, like the markets in which it operates. However, it has started encountering challenges with more and more regulators, such as an alleged failure to secure an appropriate license to operate, allegedly not meeting the regulations regarding money laundering, claims of manipulation, and a claim that its coins that are actually securities, without an appropriate process to sell securities.

Two types of crypto coins offered to the public: coins that are considered investment assets, which are used mostly to accumulate value and transfer it, and coins that offer additional functions, like voting rights, rights to participate in the profits of the project that issued them, and more. The latter are actually considered securities, and their sale must be authorized by various regulators. Authorities claim that some of Binance's assets are actually securities.

Israel, like most countries, regulates the sale of securities. In recent years, Binance, like its method of operation in many countries, has created a Hebrew website especially marketing to Israelis. It has allowed the purchase of crypto via credit card in shekels, and has offered the opportunity to purchase an extensive array of cryptocurrencies, in contrast to local exchanges that focus mostly on Bitcoin and Ethereum.

These extensive offerings made Binance particularly attractive to Israelis, who have sought out crypto coins as an investment route with exceptionally high returns. Trade is especially easy for small investors.

It is also popular because investors can buy crypto coins without the usual identification process. A few months after it started operating in Israel, Binance did start requiring preliminary identification from traders. Israel is especially sensitive to attempts to launder money by terror groups like Hamas, and the lack of identification was a bright red flag. But these challenges haven’t prevented Binance from continuing to grow.

The Russian invasion of Ukraine threatens to present another problem for Binance: sanctions against Russia. Zhao announced that he would not limit investors from Russia, since he believes most of them do not support the war against Ukraine.

"To buy and sell cryptocurrencies in Israel, you need the approval of a financial services provider, for which the Capital Authority is responsible," Tomer Ravid, owner of an Israeli company that regulates cryptocurrencies, told Al-Monitor. "As far as I know, Binance did not do that, and began marketing itself in Hebrew … Binance, it seems, has not reported to the Capital Authority any unusual actions, so obviously it attracted the attention of authorities. With this in mind, Israeli authorities are now studying the issue more in details, and are formulating ground rules to better control digital currency trade.’’