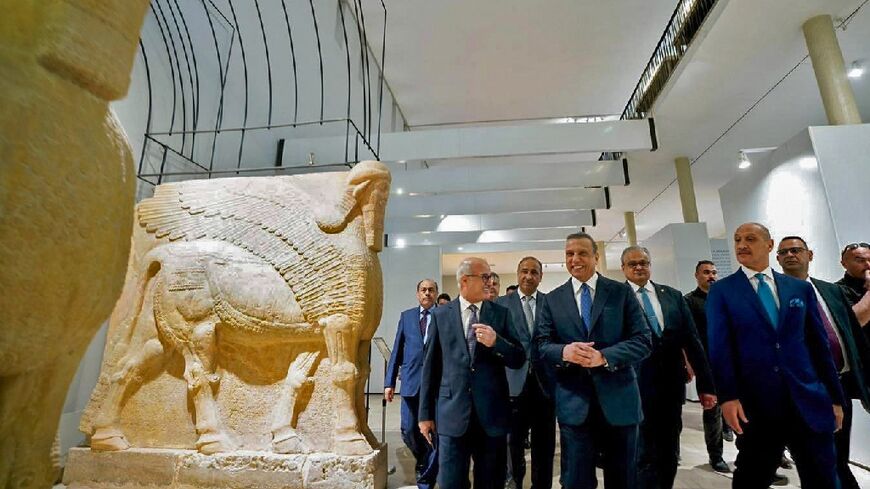 Iraq's National Museum reopened Monday to visitors after a three-year closure due to the Covid-19 pandemic and political unrest.

Treasures dating back 2,500 years to the neo-Assyrian empire alongside 9th century Islamic antiquities went back on display, including two winged bulls from the Nimrud site in the palace of Assurnasirpal II (883-859 BC).

"It's beyond my expectations, these are priceless, very valuable pieces," she said. "It reflects the depth of Iraq's history."

Prime Minister Mustafa al-Kadhemi said Sunday at the official inauguration that the museum, founded in 1923 to display five millennia of history in Mesopotamia, or modern-day Iraq, has undergone extensive renovation.

The Iraq Museum was closed three years ago "because of the demonstrations and for security reasons", said Laith Majid Hussein, the head of Iraq's antiquities authority, referring to anti-government protests which swept the country in 2019.

"And then there was the coronavirus pandemic," he said.

The museum, which has stood at its present site since 1966, was ransacked amid the chaos that followed the US-led invasion of 2003 that toppled Iraq's dictator Saddam Hussein.

The authorities have recovered around a third of some 15,000 artefacts that were looted at the time.

Islamic State group jihadists, who controlled swathes of Iraq between 2014 and 2017, carried out large-scale destruction of ancient sites, as well as trafficking in antiquities.

Iraq has recovered more than 18,000 artefacts in the past year, the vast majority of them from the United States.

In December, Iraqi authorities held a ceremony to celebrate the return of the prized Gilgamesh tablet, which is over 3,500 years old.