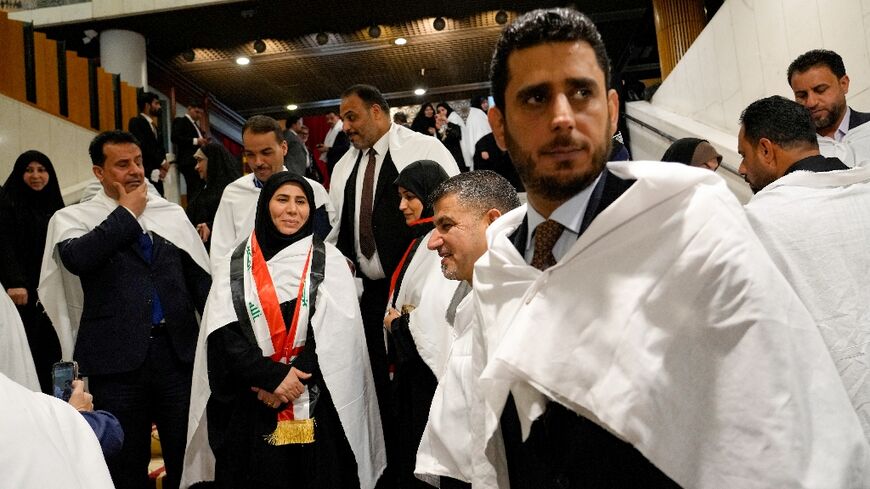 Iraqi MPs from the Sadrist bloc of Shiite leader Moqtada Sadr gather inside the Iraqi parliament in Baghdad ahead of a vote to elect a new president for the country. The election was postponed due to a lack of quorum for the second time since February - Ahmad AL-RUBAYE
by Laure Al Khoury
March 26, 2022 — Baghdad (AFP)

Iraqi lawmakers failed again on Saturday to elect a new president due to the lack of a quorum in parliament, keeping the country mired in political paralysis.

Parliament had issued a final list of 40 candidates for the post, a largely ceremonial role that by convention is reserved for a member of Iraq's Kurdish minority.

The contest pits Barham Saleh, the incumbent and a member of the Patriotic Union of Kurdistan (PUK), against Rebar Ahmed of the Kurdistan Democratic Party (KDP), the PUK's rival.

But the lack of a quorum -- set at two-thirds of the house's 329 members -- held up the vote for the second time since February, deepening war-scarred Iraq's political uncertainty.

Only 202 lawmakers showed up for the latest vote, a parliamentary official told AFP on condition of anonymity, and a new session had to be scheduled for Wednesday.

Following the session, parliament speaker Mohammed al-Halbusi said the "lack of a quorum forces us to continue holding sessions until it is achieved", the state-owned Iraqi News Agency reported.

The postponement exacerbates Iraq's political problems because it is the task of the president to formally name a prime minister, who must be backed by an absolute majority in parliament.

On February 13, Iraq's supreme court ruled out a presidential bid by KDP-backed veteran politician Hoshyar Zebari, after a complaint filed against him over years-old, untried corruption charges.

Iraqi politics were thrown into turmoil following last October's general election, which was marred by record low turnout, post-vote threats and violence, and a months-long delay before the final results were confirmed.

Intense negotiations among political factions have since failed to forge a majority in support of a new prime minister to succeed Mustafa al-Kadhemi. 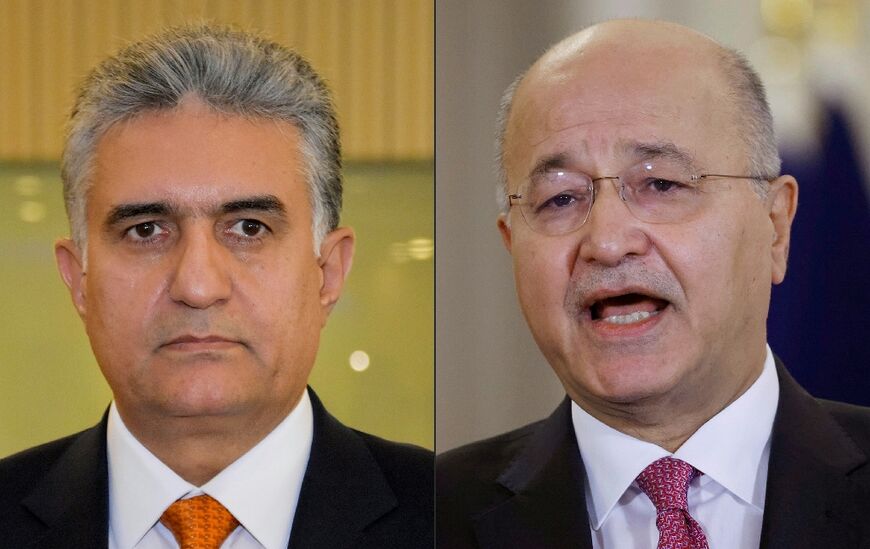 The largest political bloc, led by firebrand Shiite cleric Moqtada Sadr, had backed Zebari for the presidency and has now thrown its weight behind Ahmed.

A first vote in parliament on February 7 failed to materialise as it was widely boycotted amid the Zebari legal wrangle.

Saturday's failed session underscored the sharp divide in Iraqi politics between Sadr, the general election's big winner, and the powerful Coordination Framework, which had called for a boycott.

With the support of Sunni and Kurdish parties, Sadr wants the post of prime minister to go to his cousin Jaafar Sadr, Iraq's ambassador to Britain, once the question of the four-year presidency has been settled.

Ahead of Saturday's debacle, political analyst Ihsan al-Shammari had said that, even if the vote had gone ahead as planned, the presidency would "not be decided in the first round".

The candidate who wins the largest number of votes must secure a two-thirds majority in a second round of voting in parliament to win the presidency.

Mohamed, a civil servant who preferred not to give his full name, blamed the political system for the aborted vote.

"The constitution itself was drafted incorrectly," he said. "As a result, the whole political process is full of mistakes."