Hayat Tahrir al-Sham celebrated the anniversary of the Syrian revolution amid much fanfare, while preventing Islamic banners at the celebrations, in what provoked the jihadis who oppose it and led them to accuse HTS of trying to court the West. 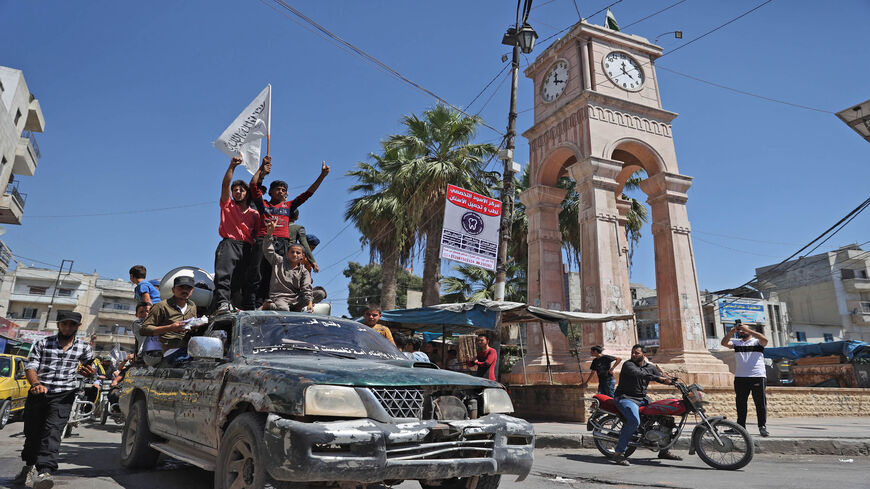 Members of Syria's top jihadi group Hayat Tahrir al-Sham, led by al-Qaeda's former Syria affiliate, parade with their flags and those of the Taliban's declared "Islamic Emirate of Afghanistan" at the Clock Square in the center of the rebel-held city of Idlib, Syria, Aug. 20, 2021. - Omar Haj Kadour/AFP via Getty Images

ALEPPO, Syria — The fanfare that accompanied celebrations held by the rebel group that controls the Idlib province in northwest Syria commemorating the 11th anniversary of the Syrian revolution sparked widespread controversy among jihadis. They believe that by banning Islamic banners and expelling the individuals who raised them during the celebrations held across the Idlib region between March 15 and March 20, Hayat Tahrir al-Sham (HTS) was attempting to polish its image before the international community. They also criticized HTS for allowing what the jihadis described as sins during the celebrations.

During the anniversary celebrations organized by HTS and the government it runs in Idlib, the HTS-affiliated security apparatuses expelled several participants who chanted slogans that they deemed inappropriate.

Some of those who were expelled demanded the opening of fighting fronts with the Syrian government forces, while others chanted against HTS leader Abu Mohammed al-Golani, and yet others raised Islamic banners not related to the revolution, according to HTS security forces.

Abu Hamza al-Kurdi, a jihadist who defected from HTS, said on his Telegram channel March 17, “The way the event was dealt with is evidence of the image sought to be conveyed about Idlib. When banners read, ‘There is no God but Allah and Muhammad is the Messenger of God,’ and young people demanded the opening of fighting fronts and battles and the renewal of the spirit of jihad and revolution, [they were faced] with warnings, expulsions and arrest threats in the event of noncompliance with the security forces.”

He said, “When it comes to music, however, and women with make-up and effeminate men dancing in the midst of the crowd in front of cameras, they were only dealt with a day or two later, once their clips and debauchery went viral. It is only after the people and the mujahideen show a reprehensible reaction that the General Security Service [of HTS] tried to absorb the wave of anger by announcing that the people who danced in the crowds were arrested.”

Kurdi added, “This mentality and [actions] on the part of Golani and [his] security forces aim at conveying a certain serious, despicable and bad idea to the world whereby in Idlib women and men mix, dance and sing, and whereby there are no banners that read, ‘There is no God but Allah and Muhammad is the Messenger of God,’ in our demonstrations."

A local source in Idlib told Al-Monitor on condition of anonymity, “HTS mobilized its security apparatus in conjunction with the celebrations marking the anniversary of the revolution. This apparatus imposed strict censorship on the celebrations and expelled anyone who raised an Islamic banner. When some participants chanted that the people wanted to open fighting fronts with the regime, the security forces rushed to them and told them to either stick to the goal of the celebration and its chants or leave.”

The source noted, “The HTS-affiliated security apparatus expelled a number of participants from the celebration in Jisr al-Shughur in the southern countryside of Idlib, and from other celebrations that took place in the cities of Sarmada, Dana, Harem, Kafr Takharim and Ariha, among others, for carrying banners with religious phrases under the pretext that these could put the revolution under the category of terrorism. The irony, however, is that the Ukrainian flag was raised with the approval and blessing of Golani, while Islamic flags were forbidden.”

What provoked the jihadis the most was that HTS allowed aspects of what they deem to be a sin. For instance, jihadis consider dancing a sin.

HTS defector Abu Yahya al-Shami said on Telegram March 16, “This is the image of moderation that the HTS leadership wants to convey to the international community, while this same leadership practiced extremism to the point of blasphemy and continues to do so but through many different means.”

A jihadi source opposing HTS in Idlib told Al-Monitor on condition of anonymity, “One of the paradoxes I witnessed was that HTS did not care about the revolution and it is currently taking advantage of the anniversary celebrations to get closer to the people by having its masked members distribute sweets to the crowds. Had they been really honest, they should have removed their masks.”

The jihadis accused HTS of trying to take advantage of the anniversary of the Syrian revolution by flexing its military and security muscle, promoting its supposed successes in the military and civil fields and emphasizing its moderate discourse far from extremism in order to win the approval of the West and the United States.

HTS is seeking to remove its name from the list of terrorist groups, as it has been working to promote a moderate discourse within the framework of its pragmatic shifts over the past few years.

HTS is seeking to convey several messages to the international community. Chief among these is that it has become a local Islamic organization with ambitions that do not go beyond the Syrian geography, and that its presence does not pose any threat outside Syria's borders.

However, the anniversary celebrations, for which HTS earmarked thousands of dollars, not only backfired at the local stage but also on the international one.

On March 18, HTS released a video titled “Rebels or Sellouts?” on the occasion of the revolution anniversary to explain its point of view. The video tackled the journey of HTS over the course of the Syrian revolution.

The video claimed that the revolution faced campaigns of distortion, as revolutionaries were attacked at the two local and international levels, accused of negligence, of selling out and handing over areas.

It said that HTS did not get involved in the quagmire of reconciliations and settlements with the Syrian government, which took several areas out of the revolution — in reference to the so-called reconciliation agreements between the government and rebels in other areas of Syria.

In the video, HTS also spoke of its efforts to protect the revolution from the threat of eradication by launching security campaigns against cells that promote reconciliation with the Syrian government.