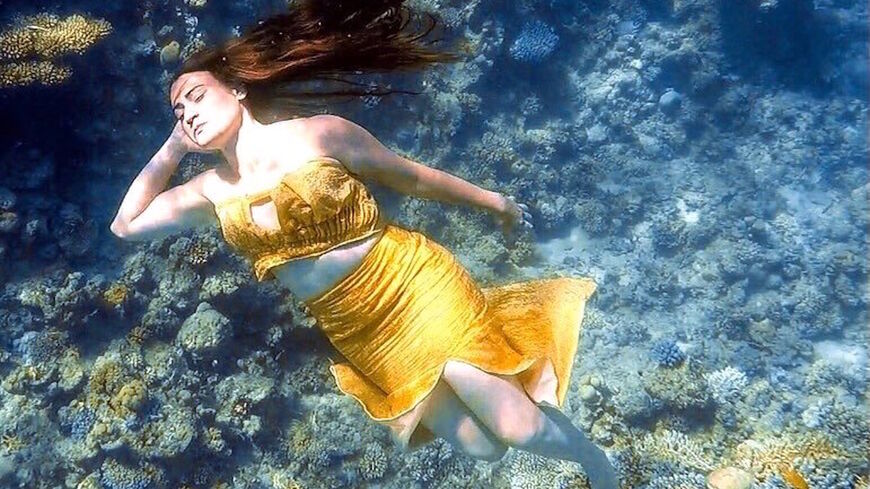 Yehia has been diving for four years and, with the help of two friends who are also divers, she came up with a plan to organize an underwater photo shoot of dresses designed by her.

“I adore diving and the Red Sea. I wish people could see the majestic underwater world as I see it. So I came up with this idea,” Yehia told Al-Monitor. She said that in the beginning the idea seemed difficult to implement.

She contacted her friend Beshoy Fayez, a diver and professional (underwater) photographer to help her achieve her dream to organize the first underwater fashion show in Egypt. “He was so excited,” she said.

They thought of who they could use as a model in the underwater photo shoot. “We didn't need a model; we needed someone who could dive,” Yehia said. They asked their friend Mona Farid who is a diver.

She said that Farid was astonished by the idea, especially since she had not worked as a model before.

“This would also be her first time diving without a diving suit or any equipment at all,” Yehia said. “So Farid was trained in freediving.”

The trio went to Sharks Bay in Sharm el-Sheikh in November last year.

Yehia made the dresses for Farid after consulting with Fayez what colors would be good for the photos taken underwater. He advised her that any color was good as long as it wasn't a color present underwater.

“The fabric of these dresses was very light like chiffon and organza so they didn't absorb water and pulled the model down. The dresses were free of embroidery for the same reason,” Yehia noted.

“I made the dresses — some of which were split and backless dresses — wide to help Farid in her movement underwater,” she said.

“Taking photos of the first dress took 45 minutes as we needed to adjust the lighting and figure out the best movements that the model should make in order to shoot at the best angles,” he said.

He noted that after shooting every dress, Yehia helped Farid change into the next dress.

“We didn't have any help. Yehia, Farid and I did this alone in cold weather,” he said. “It was really a great team effort.”

After Fayez posted the photos on his social media accounts, he received lots of praise from his followers. “I hadn't imagined this great feedback,” he said.

While Yehia was waiting during the photo shoot, many passersby asked her what Farid and Fayez were doing underwater.

“Many astonished tourists gathered and asked me why a woman was wearing her wedding dress underwater — wouldn't she drown,” Yehia said, laughing.

She explained to them that it was an underwater fashion show. “They really liked the idea saying it is unique, while taking photos and videos,” Yehia said.

Yehia and Fayez hope that their idea of an underwater fashion show will help boost tourism to Egypt’s Red Sea, especially dive tourism.

The Red Sea is regarded as one of the most popular dive destinations in the world, with its many hidden underwater treasures and over 1,000 species of fish and hundreds of coral species.

“The intricate and beautiful coral reefs and the clear water add more beauty and tranquillity to the photos. We hope these photos encourage more tourists to come,” Yehia concluded.