Conservative Palestinians are outraged at a Palestinian film about Palestinians collaborating with Israel, which also features nudity and indecency. 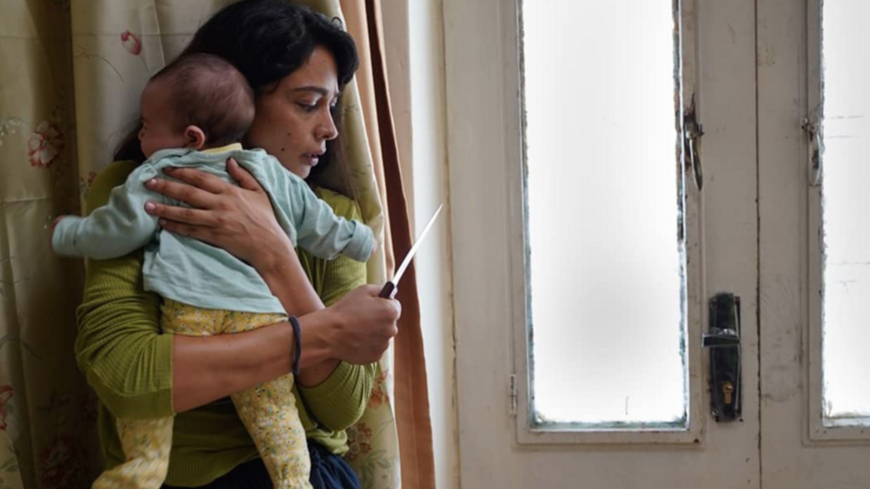 A screen capture from the film Huda's Salon. -

The film raised the ire of members of the conservative Palestinian public, which denounce such bold scenes in Palestinian cinema.

"Huda’s Salon," which features a number of Palestinian artists, shows some of the malicious methods used by the Israeli intelligence to bring down Palestinian women. The film revolves around a woman called Huda who works in a beauty salon and who is involved with the Israeli security services. Huda photographs a client in compromising positions and then uses the pictures to blackmail her into espionage.

Many activists criticized on social media "Huda’s Salon" because of the sex and nudity scenes.

Meanwhile, the film’s producers are facing great difficulty in trying to get "Huda's Salon" shown in cinemas in the West Bank and the Gaza Strip.

Following the screening of the film at the festival in Beirut, the bold clips went viral on social media, leading to popular and official demands to prevent the film’s screening in the Palestinian territories claiming the indecent scenes had nothing to do with the culture of Palestinian society.

"Huda’s Salon" is not the first film to be widely rejected by the Palestinian public. At the end of last year, a state of widespread anger and resentment swept across the Palestinian community in protest against the screening of the film “Amira,” which questions the lineage of the children born from sperm smuggled by Palestinian prisoners languishing in Israeli prisons. In the end, the film was not shown in Palestinian theaters.

Palestinian actress Manal Awad, who plays the role of Huda, told Al-Monitor that she is proud and unrepentant about her daring part in the film. She said that her role represents real events faced by a minority of women who are sometimes forced to work with the Israeli intelligence services.

She noted that the idea of ​​the film was not as bad as many thought, as it sheds light on a serious issue facing Palestinian society, which is the Israeli security services’ ongoing attempts to recruit Palestinian women through several means, most notably via hairdressing salons. She said the director of the film is trying to raise awareness of this issue.

Awad pointed out that the film was based on real life events.

The wave of condemnation that swept across Palestinian social media, she went on to say, shows that Palestinians are not accustomed to watching Palestinian artists play bold roles like the one she played in "Huda's Salon."

The film aims to highlight the reality on the ground and raise awareness among the public about blackmail, she added.

Awad denounced the criticism and insults she was subjected to on social media.

She noted that the film, despite some bold scenes, primarily aims to deliver a message to the community before seeking a profit at the box office.

Palestinian writer and critic Shafeeq al-Talouli denounced the scenes that are not in line with the conservative Palestinian customs and traditions, which are considered offensive to especially Palestinian women, and in particular those who work in hairdressing salons.

Speaking to Al-Monitor, he said that while serious social issues need to be addressed in distinct artistic ways in order to raise awareness among viewers, the fact remains that the method used by Abu-Assad in this film was wrong, unethical and should be rejected altogether due to its prohibited scenes.

Talouli called on the Palestinian Ministry of Culture to force Palestinian directors and producers to provide comprehensive explanations for their artworks before embarking on them, so that their works do not offend the Palestinian people when incompatible with Palestinian values, morals and culture.