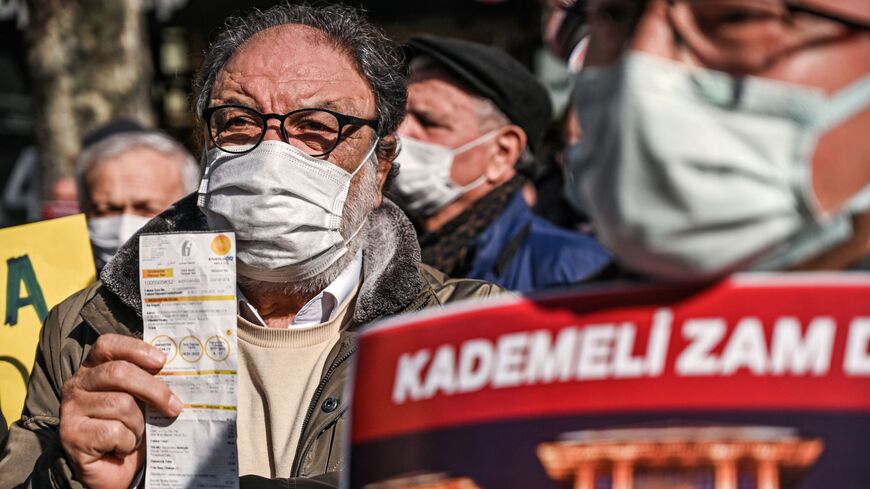 A protester holds his electricity bill as he take part in a protest against the cost of energy at Kadikoy in Istanbul, on Feb. 11, 2022. - OZAN KOSE/AFP via Getty Images

A seemingly endless stream of fuel price hikes has sparked a nationwide outcry in Turkey, where the surge in global energy prices has been amplified by the depreciation of the Turkish lira, with annual inflation already at 54.4%.

Since Russia’s incursion into Ukraine on Feb. 24, Turkish consumers have struggled to keep up with the hikes on gasoline and diesel, including a string of increases announced over six days in a row this month.

Fuel prices had already risen 10% in February and 131% year-on-year, according to data by the Turkish Statistical Institute. The annual increase threatens to climb to 155% by the end of this month. Fuel hikes alone are likely to add two percentage points to monthly consumer inflation in March.

While the surge in global prices — the result of an energy crunch fueled by Russia’s invasion of Ukraine — has spared few countries in the world, it has had a snowballing impact in Turkey, whose currency lost more than 40% of its value last year, aggravating the cost of energy imports on which the country heavily relies. Turkey’s crude oil needs are almost entirely met through imports, with its energy importation bill standing at $50 billion in 2021. To top it all off, the hard-pressed government has discontinued a mechanism through which it kept fuel prices in check.

In a stark illustration of how prices have skyrocketed relative to purchasing power, the amount of fuel that the minimum monthly wage can buy has dropped 45% over a year. The minimum wage — the pay of nearly half of workers in Turkey — bought 387 liters of gasoline in February 2021, when it stood at 2,825 liras and gasoline cost 7.3 liras per liter. Though the minimum wage was raised by 50% to 4,254 liras in 2022, it buys some 212 liters of gasoline now that the price has reached 20 liras.

Oil prices soared to multi-year highs of over $130 a barrel earlier this week before easing on March 9 after OPEC member the United Arab Emirates said it supported production increases.

Though the Turkish lira has relatively steadied this year, the price of the dollar has averaged 14.2 liras so far in March, an increase of over 85% from a year ago, also swelling Turkey’s energy import bill.

Turkey’s largest refinery company TUPRAS sets fuel prices in line with global prices. Then, the government levies a fixed special consumption tax (SCT) of 2.2 liras per liter on fuel, coupled with a 18% value added tax. The two levies account for nearly 30% of what Turkish consumers pay at the pump. The Energy Market Regulatory Authority takes a share of 0.07 liras per liter, and the shares of distributors and retailers form the remaining components of the consumer price.

Last year, the government implemented an automatic price adjustment system, which allowed it to largely shield consumers from fuel hikes by forfeiting taxes. SCT revenues, for instance, dropped by 55% to 31 billion Turkish liras last year, with the government forsaking 46 billion liras in taxes, according to the Treasury and Finance Ministry. That system is no longer in use and price increases are fully reflected on consumers.

The dizzying price hikes have badly hit farmers, who rely heavily on diesel to both cultivate and ship their produce. Turkey’s agricultural sector was already in decline, with supply gaps contributing to a food inflation of nearly 65%. Farmers have repeatedly called on the government for support.

The demand for public transportation, meanwhile, is likely to increase as car owners are compelled to drive less. Private car traffic has reportedly dropped already, also boding lower demand in the car market.

Reeling from the price increases are also fuel retailers, whose profits remain fixed to a certain sum per liter rather than a percentage of the price, meaning that their profits cannot keep pace with rising operational costs and capital needs. Out of some 13,000 filling stations across the country, about 1,000 have reportedly closed shop, mostly in areas away from city centers. Some 4,000 others are on the brink of closure, according to representatives of the sector.

More importantly, the fuel price increases have aggravated costs in various manufacturing industries and services, pushing prices up across the board. Fuel prices alone might add two percentage points to monthly consumer inflation in March.

Could the government forfeit tax revenues and subsidize fuel again at a time when it is already facing budget deficits? How much revenues it could forsake and to what extent such a move might help the economy are hard to predict as global prices remain volatile.

Moreover, Ankara has to contend with the increase in global gas prices. It has refrained from hiking gas prices at home since the beginning of the year, taking into account the winter conditions. Most recently, gas prices were hiked by nearly 50% for industries and power plants in November and by 25% for households at the turn of the year. A cascade of deferred hikes could be unleashed with the advent of spring, and high price increases appear inevitable for both industry and households.