The DC-based institution’s report also said that Israeli restrictions and the Palestinian legal framework are impeding further development in the West Bank and Gaza Strip. 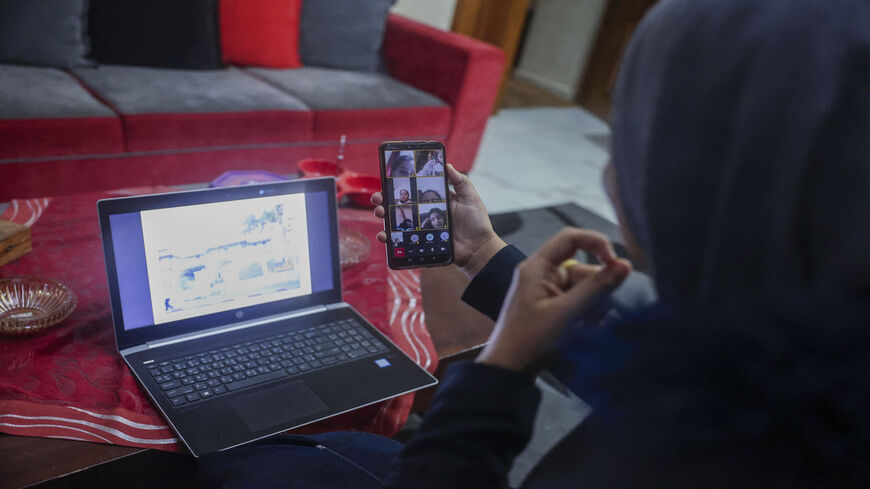 Palestinian school teacher Jihad Abu Sharar gives lessons online from her home, after a decision by the minister of education to close schools and kindergartens following a surge in coronavirus cases, Dura village, the West Bank, Feb. 3, 2022. - Hazem Bader/AFP via Getty Images

The World Bank released a lengthy report Feb. 9 on the development of the Palestinian digital economy.

The report assessed the state of the digital economy in the West Bank and Gaza Strip. The bank examined internet access and speed, use of technology in different sectors and startups in the Palestinian territories, among other topics. The report was finished at the end of 2021, but released today.

The World Bank noted significant progress in technological advancement in the West Bank and Gaza. In 2019, 80% of Palestinian households had internet access, compared to 52% in 2017. Around 64% of the population has access to third generation (3G) technology, which was only introduced in 2018, leading to a “sharp increase” in connectivity. The Gaza Strip, on the other hand, has internet at 2G speed.

Several challenges remain, however, according to the World Bank. Only a third of companies in the West Bank and Gaza have their own website, compared to 50% in the Arab world. Access to computers is another issue, particularly in the Gaza Strip. For example, on average, 14 students share one computer in school labs in the West Bank. In Gaza, the average is 43 students.

The World Bank said that both the Israeli government and the Palestinian Authority (PA) were responsible for the lack of development in the digital economy.

On the Israeli government, the bank wrote that “pervasive restrictions on movement and trade impede the ability of Palestinians to develop the private sector, export and import goods, and create jobs.” They also criticized restrictions Israel places on the Palestinian territories, including restrictions on equipment imports. The bank also said that Israel has “decision-making power over frequency spectrum,” and that this is why the territories have slower internet speeds than Israel has. Israel has 4G speed at present.

The Israeli government did not appear to immediately comment on the report. The report was covered by the PA's official news outlet WAFA as well as some Israeli outlets.

The World Bank also said weaknesses in the Palestinian legal framework are impeding digital growth. They noted “lack of laws on cybersecurity, personal data protection, and regulations specific to digital business registration,” in addition to “weak coordination among ministries on the digital agenda” and other problems. The bank added that a recently passed electronic transactions law has “deficiencies in regulating the use of digital IDs and digital signatures.”

Some Palestinian activists have taken digital reform into their own hands. In November, the Arab Center for the Development of Social Media launched an online platform to monitor violations of Palestinians’ digital rights. This includes content deletion by social media companies, online defamation, hacking and more, Aziza Nofal reported for Al-Monitor from Ramallah.

There is a growing volume of startup activity in the West Bank and Gaza, according to the report. There are around 250 such companies in the territories and digital startups are responsible for 8,500 new jobs there. Many electronic commerce companies rely on cash, though, due to "weak consumer trust in online payment.”

The World Bank has worked to boost Palestinian digital infrastructure in recent years. In May 2021, the bank provided $30 million to the PA to help with the “adoption of a modern telecoms and information technology law, and the operationalization of e-payment companies,” according to a press release. The World Bank awarded the PA a $20 million grant in March of the same year for similar purposes.