Turkish authorities have deported about 150 Syrians, even though most had official papers to reside in Turkey, including university students studying at Turkish universities. 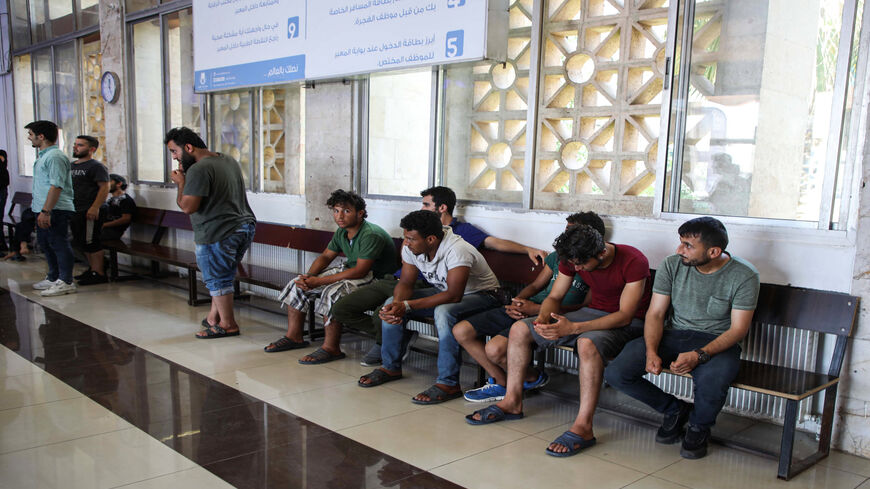 Incoming Syrian refugees who were suddenly deported from Turkey await to register with officials as they reenter Syria, at the Bab al-Hawa crossing between Turkey and Syria's northwestern Idlib province, July 24, 2019. - Aaref Watad/AFP via Getty Images

Videos recently went viral showing dozens of Syrian refugees in Turkey protesting against the decision to forcibly deport them after they had been arrested days earlier in Istanbul.

The videos showed a group of young Syrians holding the official temporary protection identification document — Kimlik — including students, some of whom have official permits to work in Turkey.

Head of the Free Syrian Lawyers Association in Turkey Ghazwan Kronfol told Orient television, “In principle, it must be made clear that the deportation based on such mechanisms and through a unilateral decision by the Turkish Immigration Department that mandates the police to implement it [the deportation] is against the law and does not provide real guarantees for refugees to present their grievance to the judiciary.”

He said, “It is important to refute each case separately. And according to what I have seen, one of the young men has a work permit in Istanbul but his residency is restricted to Ankara, which does not give him the right to live in Istanbul without transferring his place of residence there. His failure to do so is considered a violation by the Immigration Department.”

Kronfol noted, “Some deportees have residency cards in Istanbul but their addresses might not have been registered with the Immigration Department."

He added, “Deporting Syrian refugees for these reasons is illegal, as the Turkish authorities should allow them to fix their status instead of directly deporting them.”

Kronfol said, “The abuse of the legal right on the one hand, and the Immigration Department's unilateral decision to deport refugees on the other, are major issues that threaten the stability of refugees and their daily lives in Turkey.”

Meanwhile, an article the Turkish Haksoz Haber website published Jan. 31 criticized the forcible deportation of Syrians, stressing, “The security units in Istanbul committed major violations, as they sent young Syrians to deportation centers without any justification.”

It continued, “We hope that this situation, which developed in parallel with the racist atmosphere against Syrian refugees, will not be a sign of a change in the government's position. We hope that it [the government] will not try to cover up this violation and legitimize it by remaining silent.”

On Jan. 29, the Turkish authorities had deported Syrian activist Munib al-Ali after he was detained in prison for several months for criticizing the Turkish police on social media.

A few days earlier, the Turkish authorities began procedures to deport five Syrian refugees against the backdrop of a fight that erupted between two families in Istanbul over a divorce case in which sticks and knives were used.

Khaled al-Ali, who is one of 150 Syrians who were recently deported, told Al-Monitor, “I live in Istanbul for work, and I hold a Kimlik card issued by Konya city. But I moved to Istanbul, where I found a job. On Jan. 20, as I was leaving work, the Turkish police stopped me in the Fatih district of Istanbul and asked for my Kimlik card. I had it on me but they took me to jail anyway since my card was issued in Konya. They said I violated the law and put me in detention underground; they would not even give me water. They then took me along with dozens of other Syrians to the border and made me sign documents in Turkish, which I can’t read. Suddenly, we found ourselves back in Syria.”

Jassem al-Hamad told Al-Monitor, “I have a work permit issued by the Turkish authorities and work in a factory in Istanbul, but the police stopped me and took me to the police station and started deportation procedures, even though all my documents are legal. Despite all the appeals I made to them not to deport me, I was forced to sign the deportation papers, and now I am back in Syria while my wife and son are still in Istanbul alone. My life has become a living hell as I am forcibly kept away from my family.”

On Jan. 16, the Immigration Department in Adana deported 19 Syrians after they appeared in a video on social media carrying knives.

Taha Elgazi, a human rights activist defending Syrian refugees in Turkey, confirmed that 150 Syrian refugees were deported recently through the Kilis crossing to Azaz in Syria, after they were detained for 10 days in separate areas in Istanbul. Among the deported were university students and people who had Kimlik cards and permits to work in Istanbul.

Such deportations have raised fears among Syrian refugees in Turkey who are now being more careful about not committing any violations or offending the Turkish authorities on social media. Such measures have also urged more Syrians in Turkey to start looking into illegally leaving to European countries.