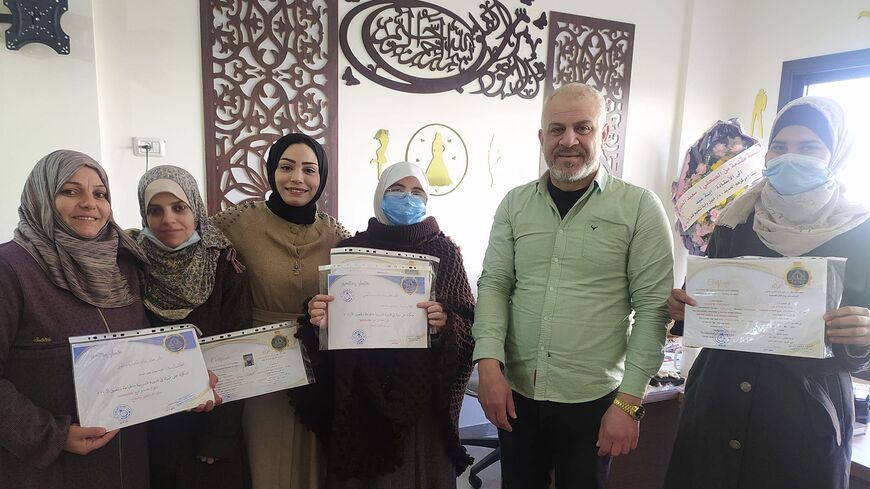 The house offers a two-month course on fashion production using the latest methods and modern equipment.

The Gaza Strip heavily relies on imported clothing, but the trainees are hoping to create distinctive designs that can compete in the market.

As she practiced on a sewing machine at the Khalil & Aya Fashion House, trainee Zakiya Akila told Al-Monitor that she had aspired to study fashion design after graduating from high school, but since Palestinian universities did not offer the subject as a major, she had no choice but to major in interior design.

She said that as soon as she learned about the house, she rushed to enroll, adding, “I aspire to become a fashion designer and leave my mark in the market.”

Expressing sadness over the state of fashion in Gaza due to the Israeli blockade and the difficult economic conditions that mean few can afford designer clothing, Akila said she hopes that things will change and that the demand for design in Gaza increases.

Magdi Sroor is another trainee who works at a sewing factory that contracts with Israeli companies to produce clothing. He told Al-Monitor that he joined the course because he wanted to learn fashion and design and have a higher income. He said he works 12 hours a day for $9.

He said that he has acquired many skills during the course and hopes to design clothes for the ready-to-wear market. Sroor aspires to open a small sewing factory and design clothing that is accessible to consumers that suits Palestinian tastes.

Khudair, the co-director, told Al-Monitor that he decided to open the fashion house at the end of last year along with Eid to help students gain the skills needed to work in the fashion industry.

He pointed out that fashion design requires taste, knowledge of design basics and ideas that work in a particular production environment. He also hopes to help young people gain a source of income amid the deteriorating living conditions in Gaza.

Khudair explained that he and his partner Eid have extensive experience in the field of fashion design, including in design, pattern making, fabric selection, construction and sewing.

Khudair studied fashion design in Jordan, graduating in 1996 and launching his own brand in 2000. In 2014, he began teaching abroad.

He stressed that the global fashion design sector is growing by the day and it is necessary to keep up with the latest techniques. He said that he is in contact with international fashion houses to explore partnership potential.

Khudair explained that his goal is to change the stereotype that local products are inferior, saying Gaza's local clothing production is sophisticated and competitive. He pointed out that Gaza-made clothes are exported to Israel and the West Bank.

His partner, Eid, told Al-Monitor that she decided to share her sewing experience with those who want to learn it in Gaza. She learned sewing online in Egypt.

She explained that the house offers two levels of courses. In the foundation course, which meets three days a week for two months, students learn the basics of design, pattern making, construction and sewing. In the five-week advanced course, students learn more techniques in fashion design and tailoring. At the end of this course, students are be able to design evening gowns and tuxedos.

Eid said the house has trained dozens of students of various ages, including young men and women, the elderly and people with special needs.

She explained that only 10 students can enroll in each course, as the number of available sewing machines is limited.

She added that the courses cost $125, a nominal fee considering all the information and training provided to the students during the course.

Asked about the difficulties they face as designers, Eid noted that the poor economic conditions in Gaza make it difficult for students to afford even the low course fees and for the house to supply the computers the students need to use design programs as well as several types of fabrics.

She said her ambition is to create a distinctive clothing line in the Gaza Strip and that is eventually exported abroad and to hire their own graduates.