Negotiations likely to start over in Israel-Cyprus gas field dispute

Israel’s Energy Minister Karine Elharar is reexamining the Israel-Cyprus dispute over the gas field on their maritime border. 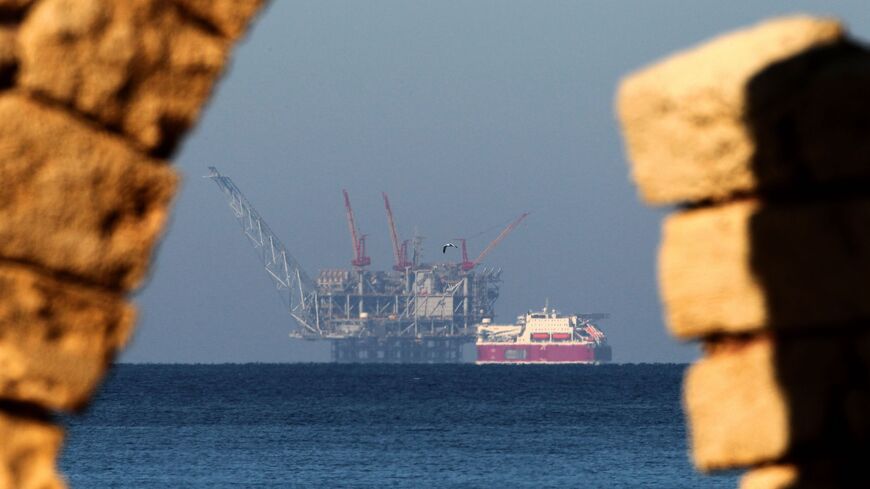 A view of the platform of the Leviathan natural gas field in the Mediterranean Sea is pictured from the northern Israeli coastal city of Caesarea on Dec. 19, 2019. - JACK GUEZ/AFP via Getty Images

The discovery of gas fields in the eastern Mediterranean Sea in the last decade has led to quite a few territorial disputes among the nations of the region over gas extraction rights.

One such dispute is between Turkey and Cyprus over Turkey’s claim to the rights of Turkish Cyprus over nearby territorial waters.

Another is between Israel and Lebanon over their maritime boundaries. The United States has tried to mediate, but so far Hezbollah has thwarted these efforts despite a very urgent need in Lebanon for sources of income and energy. American mediator Amos Hochstein, senior advisor for energy security at the State Department, will soon travel to the region to try to advance a compromise that would allow Lebanon to explore for gas fields in its territorial waters. In an interview, Lebanese President Michel Aoun said that he is optimistic.

A third dispute is between Israel and Cyprus over a gas field, the Cypriot portion of which Cyprus calls Aphrodite and the Israeli part is known as Ishai. The field, which holds 130 billion cubic meters of natural gas, was found on the maritime border between the two nations. Most of it is within Cyprus’ territorial waters and a smaller part, 7-9%, is within Israel’s territorial waters and held by a partnership of three Israeli companies: Israel Opportunity Company, Eden Energy and Nammax.

Between 2012 and 2019, unproductive negotiations were held between Israel and Cyprus to resolve the dispute. The Cypriots wish to acquire the rights of the Israeli companies, but the Israeli group wishes to remain a partner, even if minor.

The delay in resolving the issue led the companies on the Cypriot side to take unilateral steps. They announced their intention to start developing the field in 2019 as well as an agreement with Egypt to lay a gas pipeline from the Aphrodite field to a plant in Egypt. In response, director of the Ministry of Energy Udi Adiri sent a letter to the Delek Drilling Company, Noble Energy (today owned by Chevron) and Shell, which hold development rights in Aphrodite, cautioning them not to start developing the reserve until negotiations between the states are concluded. The letter caused a diplomatic uproar and Israel’s ambassador to Cyprus was summoned for a formal rebuke by the Cyprus government.

In 2020, a new energy minister was appointed in Cyprus, Natasa Pilides, who decided to focus on reaching a solution to remove the obstacles to developing the Aphrodite reserve, which would bring in a hefty income for the island nation. She agreed with Israeli Energy Minister Yuval Steinitz on a rapid timeline for resolving the issue: The franchise companies on the two sides would negotiate how the Israeli companies would be compensated for their share of the reserve. By agreeing, Israel accepted the plan for compensation rather than joint development of the reserve. The Israeli companies protested the concession of a natural resource on the part of the state. They had previously presented estimates that such a concession would mean a loss of tax income of three billion shekels ($920 million).

The Israeli Energy Ministry rejected these claims, pointing to their previously expressed concern that the companies holding Aphrodite would start developing it without an Israeli agreement.

But the Israeli government has changed, and new Energy Minister Karine Elharrar has decided to return to negotiations between the nations to reach a resolution for joint development.

Elharrar told the companies holding the Cypriot part of the Aphrodite-Ishai gas reserve and the companies holding Ishai that they have only one more month to reach an agreement for compensation to the Israeli side in exchange for fully conceding its rights and holdings in the reserve. If they do not do so by March 4, negotiations between the two states will start over.

If that happens, all options will be back on the table, notably the establishment of a joint reserve, which had been agreed upon in the convention signed by the two states in 2010. Israel Opportunity's stock rose today on the Tel Aviv Stock Exchange by more than 27% in light of the news.

Elharrar’s letter read, “Israel never gave up on its rights to the Yishai Reservoir, including the demand that the reservoir not be opened unilaterally. … This stance has been made clear to all sides a number of times on different occasions.”

The Israeli holding companies wrote in response to the letter, “Until now, Israel dragged its feet and for unclear reasons surrendered to the whims of Cyprus despite a signed accord between the countries. As long as Israel is willing to accept the demands of Cyprus and its partners and give up on all of its rights and assets in the reservoir … Israel should at least get appropriate and respectable compensation. … The development of Aphrodite is a fact on the ground, and the minister is doing the right thing in standing up for the Israeli public’s rights.”

The topic will be addressed in talks between the foreign ministers of Israel and Cyprus, and a meeting is planned between the countries' energy ministers as well.