Hundreds of elderly in Lebanon enroll at the University for Seniors division of the American University of Beirut — some to fight boredom, others to achieve long-lost dreams. 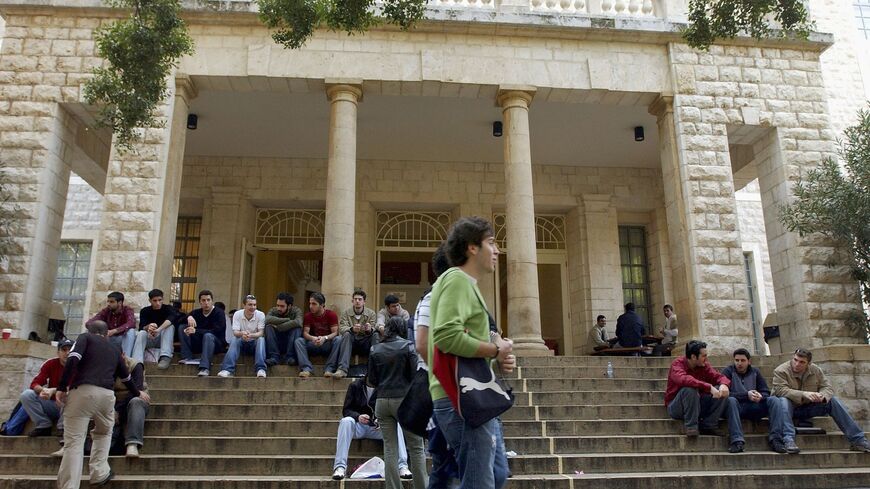 Lebanese students walk in the campus of the AUB (American University of Beirut) on Feb. 24, 2005 in central Beirut, Lebanon. - Marco Di Lauro/Getty Images

“Should I just stop everything and lie in bed waiting for death because I’m 85 years old?”

This is how Mariam Koubaissy sums up her outlook on life. This grandmother has decided to enroll in the University for Seniors, affiliated with the American University of Beirut.

“When I got married, I forgot about myself. I focused on my family. My dreams stopped for a while, but they never died, because I believe that dreams do not die if a person is ambitious and strong,” Koubaissy told Al-Monitor.

Koubaissy’s childhood dream was learning to draw, but health conditions prevented her from focusing on this talent because she was already missing school.

As an adult, work and family occupied her time, but “I would watch students come and go, and dream that I would someday be one of them,” Koubaissy said. “Now half a century later, my dream came true and I walked through those gates. I remember when I reached the main entrance, I stood there for a few minutes in astonishment, not believing that it had finally happened.”

A few days after joining the university, “I was walking in the university garden and a young man and his friend were looking at me, and I heard him tell her, ‘Look at that old lady, what is she doing here?’ and she replied, ‘Well that old lady is our new fellow student.’ I looked left and right searching for the old lady they were talking about because I really didn't feel like one.”

She noted, “I don’t want to use the ‘Age is just a number’ cliché, but I'm really convinced that I'm no different from any of the students here, rather I'm more active and hopeful. The difference between me and young people is the hair color and some wrinkles. Gray hair can be covered with dye. I still swim and take walks; my physical health is excellent and I have no illnesses. My eyesight is very good for my age and my memory is excellent. Meanwhile, you hear about young people dying or suffering from diseases, so what more do I need to enjoy life? My health is fine and my soul is eager to learn and achieve dreams.”

Some people questioned Koubaissy's decision to enroll in drawing classes, but some of those critics later became her classmates. “Instead of wasting time gossiping, I spend my time learning and keeping my memory and body active, between drawing and exercising.”

The University for Seniors at AUB is the first of its kind in Lebanon and the region. It has been a great success since it was founded in 2010 by Health Sciences PhD Abla Sibai and her colleague Cynthia Mintty. And even today, despite all the frustrating economic and social conditions in Lebanon, the elderly are still eager to learn. But after the COVID-19 pandemic in 2020, most of the lessons are now remote.

Studies have shown that remaining intellectually and physically active helps people age more healthily, program manager Maya Abi Chahine told Al-Monitor. Also, 11% of Lebanon’s population is over the age of 65, and the number is growing, and many elderly people in Lebanon live alone while their children and grandchildren live abroad.

“This program aims to give moral and health support to the elderly, who, after returning to university, are the ones who give support and hope to young people and their families,” Abi Chahine said.

The university is open to anyone over 50, regardless of education, Abi Chahine noted. She said the school provides language lessons in French, Spanish, and English. Online classes, which began because of the pandemic, have "helped enroll students from the Gulf, the US, and Africa.”

The educational program includes two three-month semesters in fall and spring. Students can attend any class they want, not only the ones they originally registered for. No graduation certificates are given to students because the goal is to make learning fun.

Available courses include neuroscience, astrophysics, political science, public health, and women's affairs, as well as lessons in the arts such as drawing, painting, and music, and classes on meditation and agriculture.

Abi Chahine explained that about 500 people enroll annually, at a cost of about 400,000 Lebanese pounds [$20 according to the current exchange rate on the black market] for each semester. "We don’t raise our prices because we don’t aim to make profits, but rather support the elderly because we are convinced that these people have the right to achieve their desires and dreams,” she pointed out.

Former banker Youssef Bakri, 84, has taken various classes at the university for 10 years. "I did not want to sit at home without a goal, because boredom kills people," he told Al-Monitor. “Studying is food for the brain, and among the various lectures, there are psychology lessons that support us very much at our age.”

Bakri pointed out that this experience is not limited to education. “Before the pandemic, we would all meet in the university garden, exchange conversations, reminisce about the past, not to mention the field trips the university would organize for us," he said. "We participated in many conferences and art exhibitions abroad. Every week we would visit an archeological area in Lebanon, all of which supported us very much at our age since we need care and attention.”