Jericho’s casino may reopen after 21 years

The Oasis Casino in the West Bank, once considered the largest gambling hall in the Middle East, has returned to the fore again amid talks about reopening the venue 21 years after it closed. 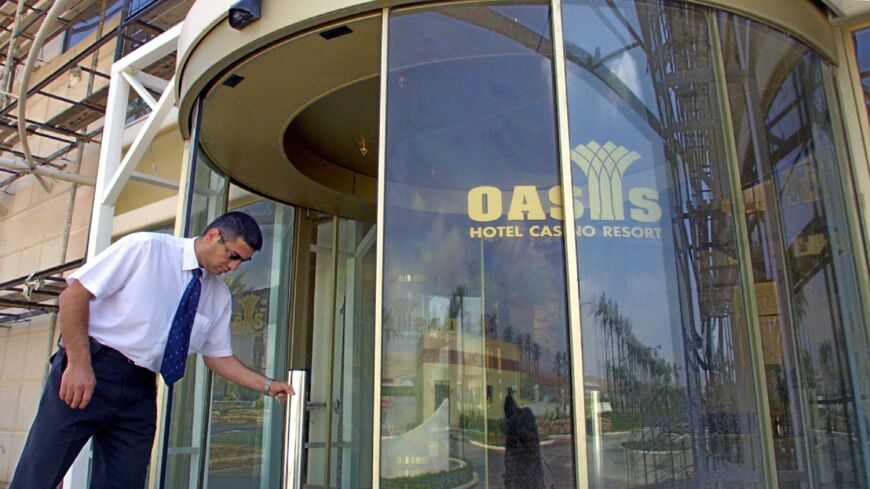 A security guard opens the main entrance to the Oasis Casino on May 3, 2001, in the West Bank town of Jericho. - David Silverman/Newsmakers

RAMALLAH, West Bank — In September 1998, the city of Jericho was in for an unusual event. Only four years after the advent of the Palestinian Authority (PA), Palestinians witnessed the opening of the Oasis Casino, the largest gambling hall in the Middle East at the time.

The casino was inaugurated in partnership with Palestinian figures and Austrian-Israeli businessman Martin Schlaff. The project was the largest investment project in the West Bank since the Oslo Accord and reflected the joint relations between the PA and Israel back then.

A major ceremony was held for the opening of the casino with the participation of several Israeli, Palestinian and international figures. But the opening back then lost some of its luster after then-international model Claudia Schiffer apologized for not being able to join the party at the last moment.

Some $150 million were spent on establishing the casino, which was equipped with 23 gaming tables and 230 ATMs.

The casino had a bar, restaurant, entertainment halls and a gambling hall for major gamblers who placed their wagers amid strict security measures by the then-emerging Palestinian security services.

Two years after its inauguration and with the outbreak of the second intifada in 2000, the Oasis Casino — which had a bad reputation among Palestinians who expressed their objection to it — closed its doors after the Israeli security services prevented Israelis from entering Jericho.

Today, 21 years later, the Oasis Casino is back in the limelight following a report by Israeli Channel 12 that the PA has requested the Israeli government reopen and operate the casino and allow Israelis to visit it.

According to the Israeli channel, the Israeli security services held a meeting to discuss the Palestinian request to reopen the casino, which was a popular destination for Israeli citizens, and decided to put the request on hold for the time being.

The channel reported that there has been coordination between the Israeli and Palestinian security services to move forward in bolstering tourism in Jericho. Over the past few weeks, the city welcomed hundreds of Israeli tourists. This could be the first step in encouraging tourism and boosting the economy in the city, including a possible decision to reopen the casino.

Although the casino was located in Jericho, it was a major destination for Israelis who wished to gamble, which is generally looked disparagingly on in Judaism, with no gambling venues in Israel.

According to the channel, the decision to reopen the Jericho casino and allow Israelis to visit it depends on the Israeli security services given the current security conditions in the West Bank, as well as on the decision and approval from the Israeli government.

The PA kept silent about this report. Al-Monitor tried to reach PA officials for commentary, but they refused to comment.

A local source from the city, however, told Al-Monitor on condition of anonymity, “There is no indication that the casino will reopen soon. Officials in the governorate have not been informed of any of this. The rundown casino building is still closed, covered with dust and dirt.”

The PA is grappling with a stifling financial crisis, which could explain if it was really pressuring the Israeli government to reoperate the casino — a venue that would provide it with tens of millions of dollars in revenues.

The PA originally faced scathing comments from Palestinians for allowing the casino's inauguration without taking into account the conservative nature of Palestinian society and the fact that gambling is forbidden in Islam. This could have prompted Palestinian officials to refrain from talking about the issue publicly now, for fear of provoking local public opinion.

The Oasis Casino was a symbol of the Oslo Accord, the economic cooperation and common interests between the PA and Israel. During its heyday, the casino received 3,000 Israeli gambling enthusiasts, at a time when Palestinians were not allowed to set foot in it.

Several legal disputes ensued from the closure of the casino in Palestine and abroad. On Aug. 2, 2016, the Swiss Arbitral Tribunal issued a decision in the PA’s favor, requesting compensation for the closure.

Back then, the Swiss court rejected the lawsuit filed by CAP Holding AG, one of the companies that ran the casino, before an international arbitration panel, obligating it to compensate the state of Palestine and the Palestine Commercial Services (formerly) for part of the lawsuit expenses amounting to 2.8 million Swiss francs, or about $2.9 million.

Cap Holding AG filed the lawsuit, demanding financial compensation from the Palestinian side amounting to about $1.5 billion for closing the casino, in addition to tax refunds of more than $35 million and interest.

Back then, the PA accused Muhammad Rashid, the financial adviser of late Palestinian leader Yasser Arafat; dismissed Fatah leader Mohammed Dahlan; and other figures such as Hassan Asfour and Walid Shalaf of testifying in the arbitration panel in favor of Schlaff and Omri Sharon, son of former Israeli Prime Minister Ariel Sharon.

But Rashid denied the accusations back then and stressed that neither Sharon nor any Israeli investor has anything to do with the casino.

Ismat Mansour, a Ramallah-based expert in Israeli affairs who works for several local media outlets and also had a center for Hebrew translation, told Al-Monitor, “Schlaff, the Israeli billionaire who invested in the Jericho casino, is trying to reopen it through his relations with Finance Minister Avigdor Liberman, who is in favor of reopening the casino and was previously trying to establish one in Eilat.”

Mansour said the possibility of reopening the casino is being considered by the Israeli security services, but they have yet to approve it.

“The Israeli government hasn’t also given its approval on the issue,” he said, saying that the “PA would welcome any decision to reopen the casino.”

Mansour said any Israeli decision would be based on the security situation in the West Bank and the directions of the Israeli government to support the PA economically, noting that Israel believes the casino would be economically beneficial to the PA and would strengthen ties between the two sides.

“It is likely that Israel would agree to reopen the casino, especially since it is located in the city of Jericho, which could be provided with security. The rich in Israel and gambler enthusiasts are pushing in this direction,” he said.