A spokesperson for the House Foreign Affairs Committee told Al-Monitor that the State Department will reprogram the aid. 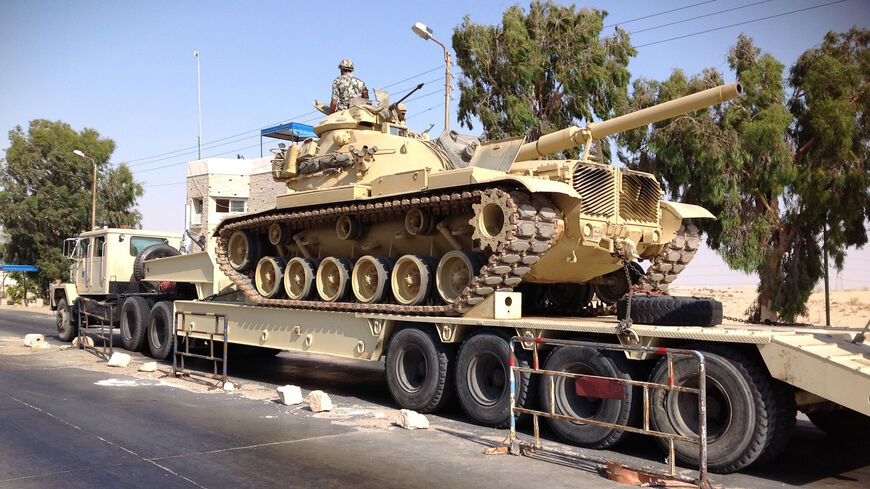 An Egyptian military tank is deployed in the northern Sinai town of Al-Arish on July 16, 2013. - STR/AFP via Getty Images

"We can confirm the State Department will be reprogramming $130 million of [foreign military financing] tied to certain human rights criteria as outlined last year that have not been fully met by Egypt," a spokesperson for the House Foreign Affairs Committee told Al-Monitor.

The State Department said in September it would freeze $130 million in foreign military financing to Egypt unless the North African country adhered to certain rights-related criteria by the administration’s deadline of Jan. 30. Those conditions, which were not made public, required Egypt to release or drop charges against a number of activists, as well as end a decade-long investigation into civil society groups.

Egypt has released some, but not all, of the prisoners singled out by the administration, and has not closed the sweeping investigation known as Case 173.

State Department deputy spokesperson Jalina Porter told Al-Monitor in a phone briefing with reporters Friday that the US had “yet to make a decision regarding the $130 million in foreign military financing.”

Porter’s comments came hours after Democratic Sen. Chris Murphy confirmed in a statement that the administration had chosen to reprogram the aid, and several sources told Al-Monitor that State Department officials had briefed Congressional appropriations offices this week that Egypt was not expected to meet the administration’s Sunday deadline.

Why it matters: Reprogramming the aid is a somewhat symbolic move. At $130 million, it represents just 10% of the $1.3 billion in annual military assistance that Egypt receives from the United States.

Biden came into office promising “no more blank checks” for President Abdel Fattah el-Sisi, the Egyptian general-turned-president who enjoyed warm relations with President Donald Trump. The Biden administration says human rights are "central" to the US-Egypt relationship, but also stresses Egypt’s cooperation on regional security, including its role brokering a May 2021 ceasefire between Israel and Hamas.

Secretary of State Antony Blinken raised human rights during a phone call with Egyptian Foreign Minister Sameh Shoukry on Thursday, according to a State Department readout.

The timing: The State Department’s recent approval of some $2.5 billion in arms sales to Egypt has muddled its message on human rights, advocacy groups say. The potential sale, which includes 12 Super Hercules C-130 transport aircraft, was announced hours after House Democrats warned Blinken over Cairo’s human rights record and came the same day Egypt marked the anniversary of its Jan. 25 uprising.

The reaction: Murphy tweeted that blocking the $130 million in funding "was the right move, and one that I have been pushing the administration to make. America needs to put its money where its mouth is on human rights in Egypt.”

"I called on the State Department to stand by its word and hold Egypt accountable for continued human rights abuses and violations of basic freedoms. I am encouraged by the administration’s decision to do so,” Meeks said.

Human rights groups on Friday welcomed the news, but said the US could be doing more to hold Egypt accountable.

"It’s commendable that the US stood firm on the human rights conditions it had set. Yet, in the bigger picture, the administration remains far too supportive of the Sisi regime and human rights remain far too marginal in US policy," said Amy Hawthorne, deputy director for research at the Washington-based Project on Middle East Democracy.

The Egyptian Embassy in Washington did not return a request for comment.

Know more: Blinken faced Congressional pressure to reprogram the frozen funds, as Al-Monitor reported here. For more background, here’s our report on the administration’s decision in September to release some military aid to Egypt.