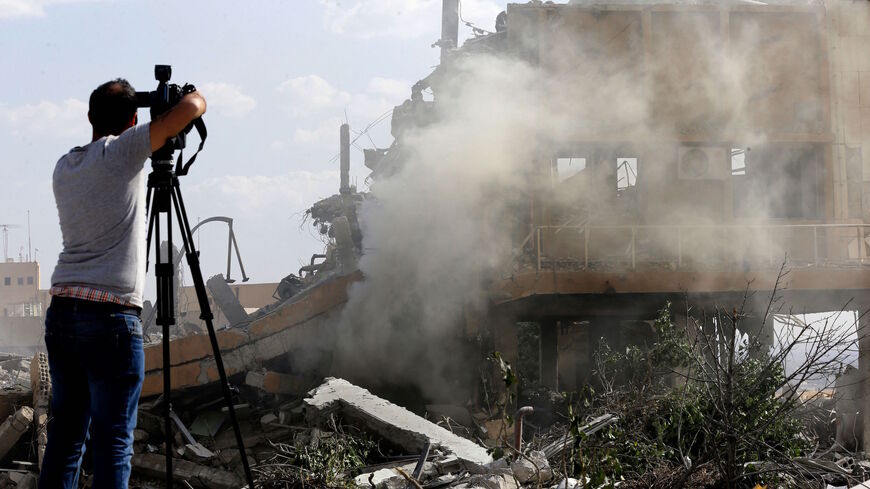 A journalist films the wreckage of a building described as part of the Scientific Studies and Research Centre (SSRC) compound in the Barzeh district, north of Damascus, during a press tour organized by the Syrian information ministry, on April 14, 2018. - LOUAI BESHARA/AFP via Getty Images

The United Nation’s top representative for disarmament told the Security Council on Wednesday that Syria has failed to provide complete answers on its history with chemical weapons.

Nakamitsu said the Bashar al-Assad government has submitted 17 amendments and several supplementary documents to its original weapons declaration, but still has left 20 out of 24 requests for disclosure unresolved since a 2013 agreement to rid the country of chemical weapons.

“Full cooperation by the Syrian Arab Republic with the OPCW [Organization for the Prohibition of Chemical Weapons] Technical Secretariat is essential to closing these outstanding issues,” she said.

US Ambassador to the UN Linda Thomas-Greenfield called out Damascus during the session on Wednesday, urging the international body not to “be fooled by Syria’s veneer of cooperation while it continues obfuscating the narrative.”

“The Assad regime has not been candid or forthcoming with the OPCW, despite the tireless efforts by the OPCW to engage Syria to resolve these issues,” Greenfield said. “For nearly nine months, Syria has prevented the next round of consultations with the Declaration Assessment Team from occurring in Syria. It has also failed to accept the alternative solution proposed by the OPCW to hold a limited set of meetings in The Hague.”

Nicolas de Riviere, France’s ambassador to the UN, lambasted Damascus for committing “crimes against humanity” by deploying chemical weapons in Syria’s civil war while failing to comply with OPCW investigations after agreeing to disarm.

Ireland’s representative also sought to emphasize the seriousness of the problem. “Syria cannot pick and choose which of its legal obligations it is willing to accept,” Geraldine Nason said.

Syria signed a deal to get rid of its chemical weapons stockpile under an international agreement pushed by Russia and the United States in 2013. The Assad regime did not acknowledge it had a chemical weapons program, but now claims it has fully complied with the disarmament deal.

In May, disarmament chief Nakamitsu revealed that investigators had discovered a significant stockpile of undisclosed chemical agents used in weapons production in September 2020. The Syrian government denied the charge, but the OPCW dismissed the denial.

In July, Syria’s government reported that chemical weapons evidence it was obliged to preserve at an underground storage site had been destroyed by a June 8 Israeli airstrike. The OPCW has requested documentation, but the Assad regime has not provided it.

Syria has also refused to grant an entry visa to one of OPCW’s declaration assessment team, Nakamitsu said.

The OPCW has concluded that the Syrian government was likely behind chemical weapon attacks that killed civilians in 2017 and 2018. The body took the unprecedented step in April of removing Syria's voting rights in response to its non-compliance.

Syria’s representative to the UN dismissed the concerns on Wednesday, blaming Western disinformation and accusing the OPCW’s technical secretariat of being part of a Western plot.