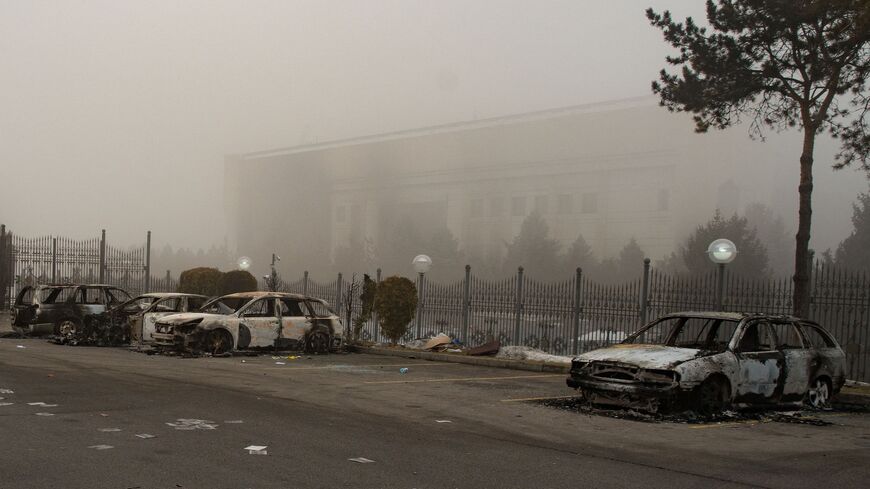 A picture shows burned-out cars near administrative buildings in central Almaty, Kazakhstan, on Jan. 6, 2022, after violence that erupted following protests over hikes in fuel prices. - ALEXANDER BOGDANOV/AFP via Getty Images

UAE-based airlines Flydubai and Air Arabia have halted flights to Kazakhstan’s largest city of Almaty amid the deadly political unrest in the Central Asian country.

Dozens in Kazakhstan are dead and hundreds injured after a sudden hike in fuel prices sparked violent anti-government protests in the ex-Soviet republic and prompted President Kassym-Jomart Tokayev to declare a state of emergency.

Clashes between protesters and security forces continued throughout Almaty on Thursday. A day earlier, Tokayev said “terrorists” had taken control of the city’s airport and hijacked a number of airplanes.

A spokesperson for Emirati low-cost carrier Flydubai said Thursday that two flights between Dubai and Almaty were cancelled “due to the situation on the ground.” The spokesperson added that flights to the Kazah capital of Nur-Sultan continue to operate.

Reuters reported that Air Arabia’s website showed return flights scheduled for Thursday from Almaty to the Emirati city of Sharjah were cancelled. The budget airline did not immediately comment, the news agency said.