A previously announced agreement to export Egyptian gas to Lebanon has yet to come to fruition. 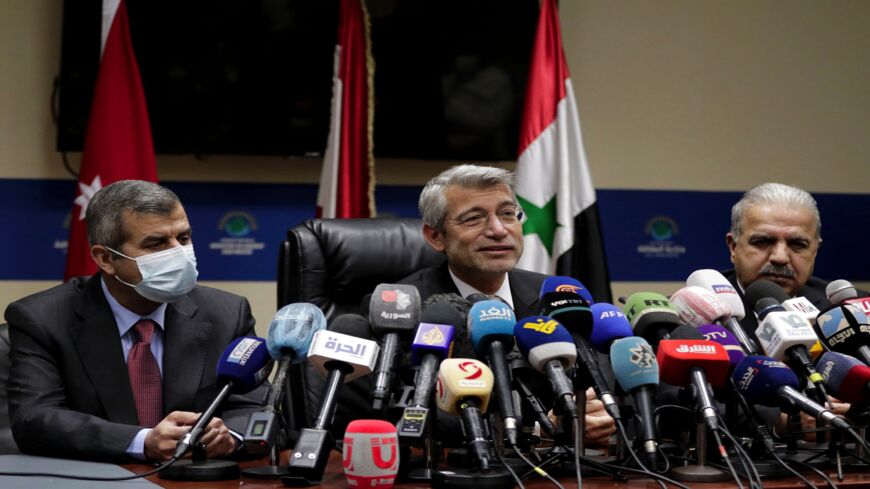 Lebanon's Energy Minister Walid Fayad (C), Syria's Electricity Minister Ghassan al-Zamil (R), and Jordan's Minister of Energy and Mineral Resources Saleh Ali Hamed al-Kharabsheh speak to the press during the signing of a deal that will supply Lebanon with electricity, in Beirut on Jan. 26, 2022. - ANWAR AMRO/AFP via Getty Images

The Lebanese government announced today a new electricity deal with Syria and Jordan.

Lebanon’s Water and Energy Minister Walid Fayad signed the agreement with his Syrian and Jordanian counterparts, Ghassan al-Zamel and Saleh al-Kharabsheh. The deal will send 250 megawatts of electricity from Jordan and Syria into Lebanon, the official National News Agency reported.

The exact arrangement is not yet finalized.

“We still await financing by the World Bank, but we will work on it as soon as possible so that this agreement becomes effective,” said Fayad.

Lebanon is suffering from a devastating economic crisis that is also being marked by frequent electricity cuts and fuel shortages.

This is not the first time the Lebanese government has claimed help is on the way from Arab states. Egypt, Jordan and Syria agreed last September to export Egyptian gas to Lebanon. The United States, which sanctions Syria, has endorsed the plan, but the gas has yet to arrive. The Lebanese Shiite Islamist organization Hezbollah did manage to successfully import Iranian fuel last year.