The formal proceedings began 14 months after the Sweden-based dissident was lured into a “honeytrap” in Turkey before being smuggled home by Iran-assigned operatives. 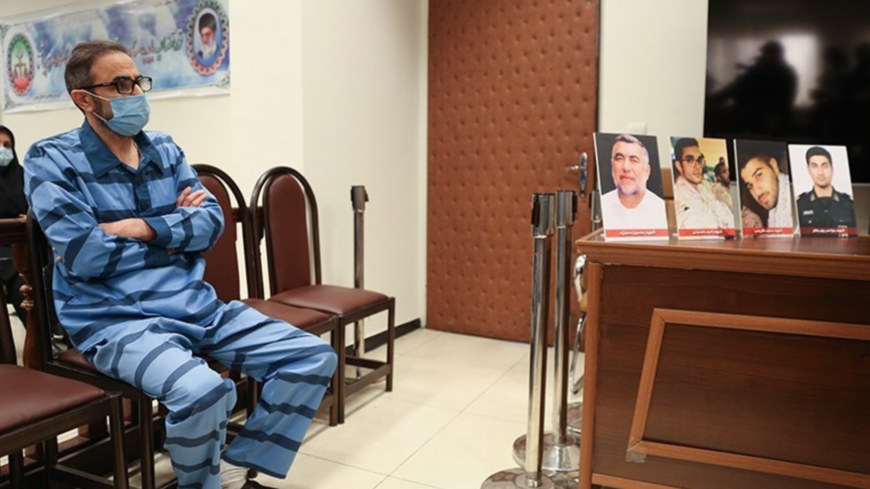 A “Revolutionary” court in Tehran opened the trial of Habib Chaab, the leader of a foreign-based pan-Arab movement, on terror-related charges.

Reading out the indictment in the Jan. 18 session, a prosecutor accused Chaab of “corruption on earth,” a charge in Iran’s Islamic penal code that is punishable by the death penalty.

The indictment was based on Chaab’s alleged role in “masterminding and carrying out terrorist operations” in a campaign “to fight the Islamic Republic establishment.”

Chaab, also identified as Asyud, is believed to have been one of the founders of an Arab opposition group, known by such names as Al-Nidhal, Al-Ahwaziyah and the Arab Struggle Movement for the Liberation of Ahwaz, which advocates independence for the Arab minority in Iran’s oil-rich Khuzestan province.

The trial largely focused on a September 2018 attack by several gunmen who ambushed an Iran Army Day parade in the city of Ahvaz, leaving at least 25 people dead. Iranian authorities have blamed the attack on Chaab’s movement, a charge the group has denied.

The first session was adjourned without the defendant given a chance to speak to the court. Wearing a prison uniform, the bearded Chaab was seated facing the photo of one of the children killed in the 2018 attack.

Only days after the dissident’s arrest in late 2020, Iran’s state broadcaster aired his confessions of “masterminding” the Ahvaz attack and several other “plots” in Khuzestan province. Again, ahead of the trial, the judiciary’s official news agency Mizan posted a series of documentary-style videos in which the defendant himself describes his activities as “terrorism” and details disruption of oil pipelines and a bombing inside a private bank branch.

Iran’s state broadcaster and intelligence apparatus have been strongly criticized by rights organizations for airing detainee confessions, which they argue are coerced under inhumane conditions.

In its initial statement upon Chaab’s capture, Iran’s Intelligence Ministry fell short of detailing how the dissident was lured into Turkey and only briefly boasted about the “specialized and joint operations” by its “anonymous soldiers.”

However, Turkish officials accused the Islamic Republic of using handlers to abduct and smuggle the defendant into Iran. Chaab’s Turkey trip was, according to a Sky News report, a romantic trap set by an Iran-assigned woman.

The Chaab saga bore many elements of a familiar pattern involving the Paris-based journalist Rouhollah Zam. The dissident’s ill-fated journey began when he fell into an Iran intelligence trap that took him from France to Iraq and then Tehran, where he faced what activists said was a “kangaroo court” in a trial that concluded with his execution.