Tehran has denied reports of an interim deal in Vienna, but there are signs that Iranian officials are preparing their public for a possible agreement. 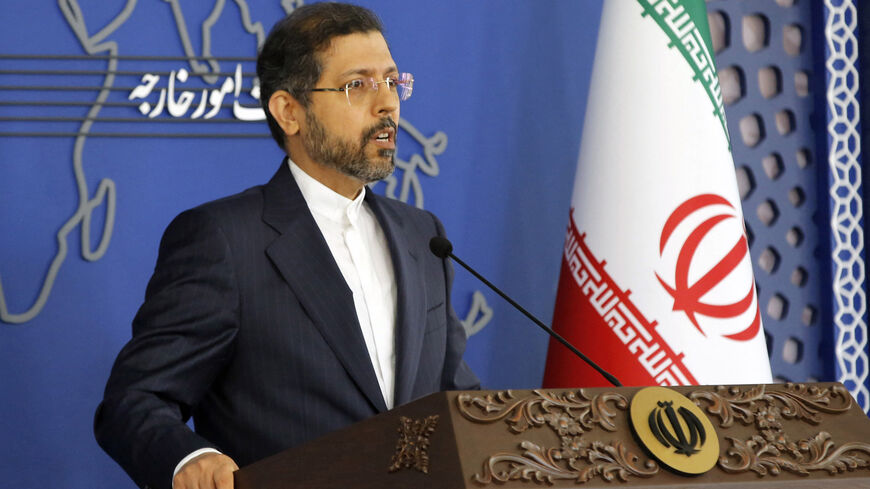 Iran’s Foreign Ministry spokesman has denied media reports about a possible interim nuclear deal. Speaking to reporters Jan. 10, Saeed Khatibzadeh said, “We want a durable and reliable agreement and any agreement that does not have these two criteria is not on the agenda for us.”

Khatibzadeh continued, “We all have to be certain that America’s return [to the original deal] is verified and guaranteed and the cycle of sanctions have to be removed — none of these can happen with an interim agreement.”

Arab-language newspaper Rai Al-Youm originally reported on the possibility of an interim agreement, though this is not the first time in these latest rounds of talks that reports have surfaced of its possibility. The newspaper reported that negotiators had agreed to a two-year deal as a confidence-building measure. The agreement would have reportedly had Iran send its reserve enriched uranium to Russia.

Iranian negotiators, under the new administration of Ebrahim Raisi, have rejected the possibility of an interim deal, specifically for the reasons that Khatibzadeh outlined, mainly the guarantee of sanctions removal. When the United States exited the Joint Comprehensive Plan of Action (JCPOA) in 2018 under President Donald Trump, Iran restarted and expanded its nuclear program — at first in increments as a tactic to persuade Europe to ignore US sanctions, but later as a means to strengthen its position under the Biden administration.

Despite the denial of an interim agreement, there appears to be signs coming out of Tehran that some sort of an agreement is imminent, or at the very least Iranian officials are preparing the public for the possibility of one.

Iran’s Supreme Leader Ayatollah Ali Khamenei, who has final say on all state matters, said in his most recent speech, “Not submitting to an arrogant and bullying enemy is one of the principles of the Islamic revolution, but negotiating, speaking and cooperating in certain areas with the enemy does not mean submitting to them.”

Khamenei, while likely directing the talks behind the scenes, either through advisers or himself, has publicly played an aloof role in the talks, agreeing to them in principle but reiterating that the United States cannot be trusted. His position ironically was vindicated when Trump exited the JCPOA and reapplied sanctions, leaving the Rouhani administration scrambling looking for solutions.

Foreign Minister Hossein Amir-Abdollahian has also been signaling in his interviews that the negotiations are headed in a positive direction. Speaking to Iranian media, Amir-Abdollahian said, “Currently we assess the Vienna talks as positive and moving forward.” He noted that while initially the United States had “unacceptable demands,” they have now “adapted to the realities of the scene.”

The eighth round of the talks — to get the United States back into the JCPOA and Iran back into full compliance — began this morning in Vienna with Iran-Russia bilateral meetings. Iranian officials want full sanctions removal, especially on the sale of its oil and banking transactions, and the United States wants the previous nuclear levels and inspections that Iran had agreed to under the 2015 JCPOA terms.