The US government has said in the past that Middle Eastern armed groups are operating in South America. 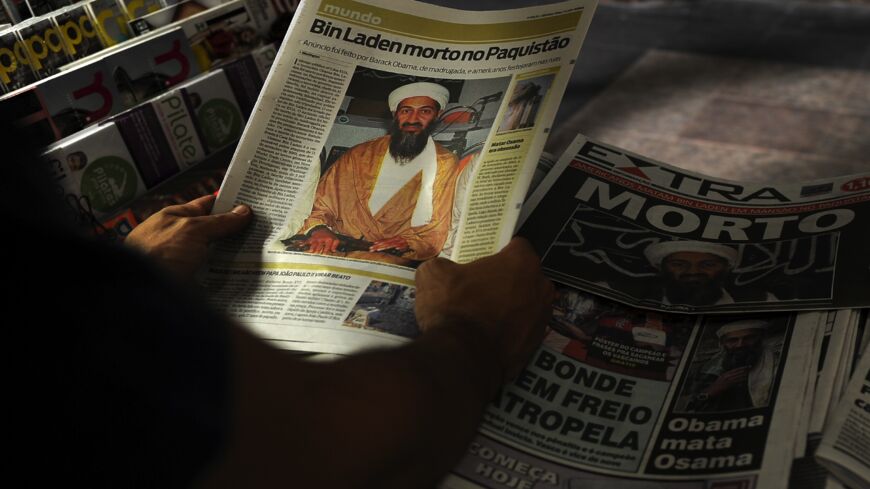 A man reads a newspaper announcing the death of Osama bin Laden, at a newsstand in Rio de Janeiro, Brazil, on May 2, 2011. - VANDERLEI ALMEIDA/AFP via Getty Images

The US government designated several men as terrorists today for allegedly participating in a Brazil-based al-Qaeda network.

Haytham Ahmad Shukri Ahmad al-Maghribi was placed on the list of Specially Designated Global Terrorists. Maghribi arrived in Brazil in 2015 and allegedly conducted foreign currency purchases with Ahmed Mohammed Hamed Ali, who is allegedly al-Qaeda’s “contact” in Brazil. Ali was designated a terrorist in 2001, the US Department of the Treasury said in a press release.

The Treasury Department also designated Mohamed Sherif Mohamed Mohamed Awadd as a terrorist. Awadd came to Brazil in 2018 and allegedly received financial transfers from other al-Qaeda associates. He also allegedly provided unspecified support to Mohamed Ahmed Elsayed Ahmed Ibrahim, who is also a designated terrorist. Another man in Brazil, Ahmad al-Khatib, was also designated for allegedly doing business with Ibrahim, according to the department.

The department said that Awadd is the owner of Home Elegance Comercio de Moveis EIRELI, a Sau Paolo-based furniture company. The company did not immediately respond to Al-Monitor’s request for comment.

The Department of the Treasury did not provide further details on the men, including where they are from or how their financial actions allegedly benefited al-Qaeda. The department did not immediately respond to Al-Monitor’s request for more for information.

Al-Qaeda is a multinational Islamist organization that is widely designated as terrorists. The group was responsible for the September 11, 2001, attacks in the United States. More recently, al-Qaeda’s affiliates have been fighting in the Syrian civil war against the government.

US officials have long accused al-Qaeda, Hezbollah and other Middle East-based armed groups of operating in South America, particularly in the remote border area between Argentina, Brazil and Paraguay. A 2002 report from the US Army War College stated that al-Qaeda was active in the tri-border area to establish links with Hezbollah supporters.

Hezbollah’s activities in South America are more established. The Lebanese organization has long engaged in drug trafficking on the continent.

The presence of Middle Eastern armed groups in South America was a recurrent focus for the US government in the years following the September 11 attacks.