Egypt's minister of petroleum and mineral resources says his government needs a guarantee from Washington that Cairo's involvement in the Arab Gas Pipeline project will be exempt from US sanctions on Syria. 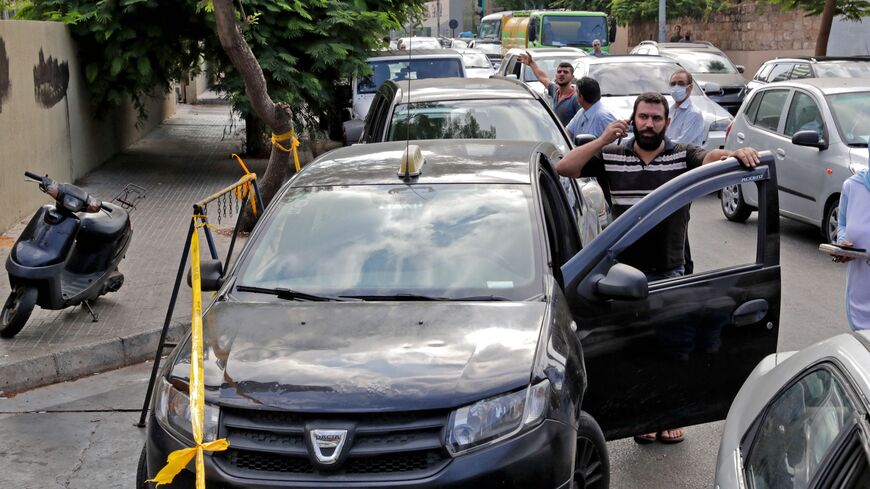 Lebanese drivers wait in a queue outside a closed petrol station in Beirut's Hamra district on Aug. 20, 2021. - ANWAR AMRO/AFP via Getty Images

Egypt is still seeking “proper clearance” from the United States so that it can supply natural gas to energy-starved Lebanon without exposing itself to sanctions targeting the Syrian regime and its benefactors, the Egyptian petroleum minister told Al-Monitor during his visit to Washington last week.

“We do not want to find ourselves helping our brothers in Lebanon but meanwhile penalized,” explained Egyptian Minister of Petroleum and Mineral Resources Tarek El Molla. “Therefore we need to make sure that we will get the proper clearance,” he said. “So it's a work in progress.”

Egypt has agreed to a US-endorsed deal to transport Egyptian natural gas to Lebanon using the Arab Gas Pipeline, an existing transnational pipeline extending from Egypt to Lebanon through Jordan and Syria. For its participation in the World Bank-financed project, the Syrian government will receive in-kind compensation in the form of gas supplies instead of cash payments, Molla said.

What the US says: The Biden administration has downplayed concerns that the energy plan would violate US sanctions barring certain transactions with the Syrian government. Senior State Department official Victoria Nuland said in October that because the deal “falls under the humanitarian category, no sanctions waiver would be required.”

A spokesperson for the State Department previously told Al-Monitor that the administration is working to address any sanctions concerns and ensure the arrangements are structured and financed in a way that is in line with US policy.

What Egypt wants: The North African country is seeking more explicit assurance that the pipeline project is in compliance with US sanctions law, including the Caesar Syria Civilian Protection Act. The bipartisan Caesar Act aims to choke off the Syrian regime's financial lifelines by ​​allowing for sanctions on third parties who do business with the Syrian government, specifically in the construction, engineering, aviation and energy sectors.

“We are cautious and we would like to get the needed clearance in coordination with the US administration,” Molla said, adding that the issue was part of his recent discussions with US officials. “It needs to be a clear document that would exempt us or would clear us from any possible sanctions,” he said. “I think they will do what they can in order to meet this requirement.”

Why it matters: After a decade of international isolation, Syria’s participation in the four-country gas deal underscores the gradual resumption of ties between Damascus and some Arab states. In recent months, President Bashar al-Assad has hosted Emirati Foreign Minister Abdullah bin Zayed Al Nahyan in Damascus and held a phone call with King Abdullah II of Jordan.

The Biden administration says it has no plans to “normalize or upgrade” relations with Syria, nor does it support regional normalization efforts. But critics say US officials could be doing more to discourage Arab capitals from accepting Assad back into the fold.

The latest: On Thursday, ​​the Organization of Arab Petroleum Exporting Countries unanimously voted to make Syria the host of its annual energy conference in 2024, a move the State Department described as concerning.

“We continue to urge states in the region to consider carefully the atrocities inflicted by the Assad regime on the Syrian people over the last decade, in addition to the regime’s continuing efforts to deny much of the country access to essential humanitarian aid and security, before considering any engagement with the regime,” a department spokesperson said.

What’s next: Cash-strapped Lebanon, where power outages caused by a shortage of fuel are deepening the country’s economic crisis, aims to generate 450 megawatts of power at its Deir Ammar power plant using the Egyptian natural gas.

“This complete transaction could, in my opinion, be completed so that you could see gas flowing in the pipeline during the first quarter or by the first quarter,” Molla said, who acknowledged, “Not all the cards are in my hands.”

Know more: Osama Al Sharif breaks down the pipeline plan and what it means for Syria’s status on the world stage.