The congressional letter also called for sanctions on three other foreign surveillance firms. 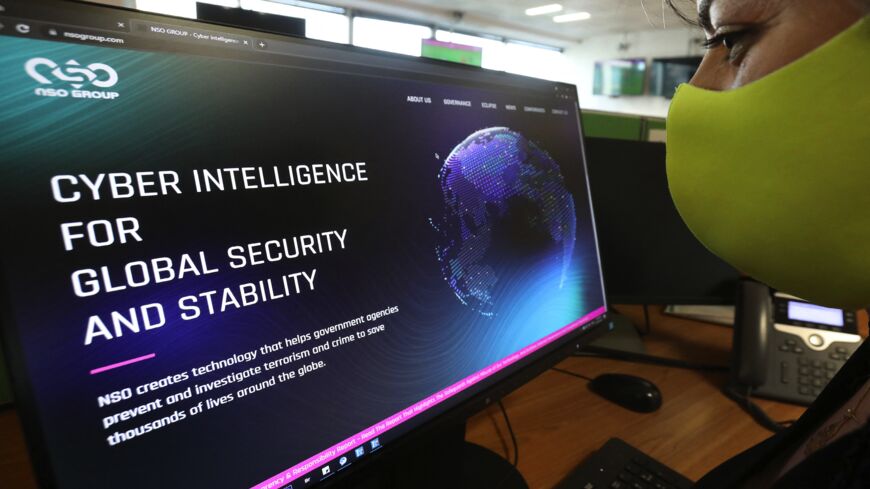 A woman checks the website of Israel-made Pegasus spyware at an office in the Cypriot capital, Nicosia, on July 21, 2021. - MARIO GOLDMAN/AFP via Getty Images

Congressional Democrats are calling on the Biden administration to sanction Israeli cybersurveillance firm NSO Group following a slew of reports implicating the company’s spyware in the targeting of dissidents around the world.

"To meaningfully punish them and send a clear signal to the surveillance technology industry, the US government should deploy financial sanctions," the letter says, adding that the four companies facilitated the “disappearance, torture and murder of human rights activists and journalists.”

The Democratic lawmakers referenced a recent report that at least nine State Department employees' phones were hacked with NSO spyware. The apparent cyberattack targeted US diplomats based in Uganda or officials whose work focused on the country.

NSO’s Pegasus software was thrust into the spotlight in July when a consortium of international media outlets published an investigation that indicated the firm’s malware had been used by foreign governments to hack the phones of journalists, politicians and human rights activists. Researchers say the hacking software can be used to remotely access a phone’s contents and turn on the camera and microphone.

NSO Group has dismissed the reporting and says it licenses Pegasus to governments requiring surveillance tools to fight terrorism and crime.

In November, the US Department of Commerce put NSO on its economic blacklist, which restricts US companies from exporting certain technologies to the Israeli firm. An NSO spokesperson said the company was “dismayed” by the US decision and would seek its reversal.

Earlier this month, a group of 86 human rights groups and independent experts urged the European Union to add NSO to its global sanctions list. Their letter to EU foreign policy chief Josep Borrell cited reports that Pegasus was used to hack the cellphones of six Palestinian rights activists, at least half of whom were linked to groups controversially deemed terrorist organizations by the Israeli government.