The Pentagon is renewing show-of-strength flights over the Persian Gulf as the US waits for talks over Iran's nuclear program to resume. 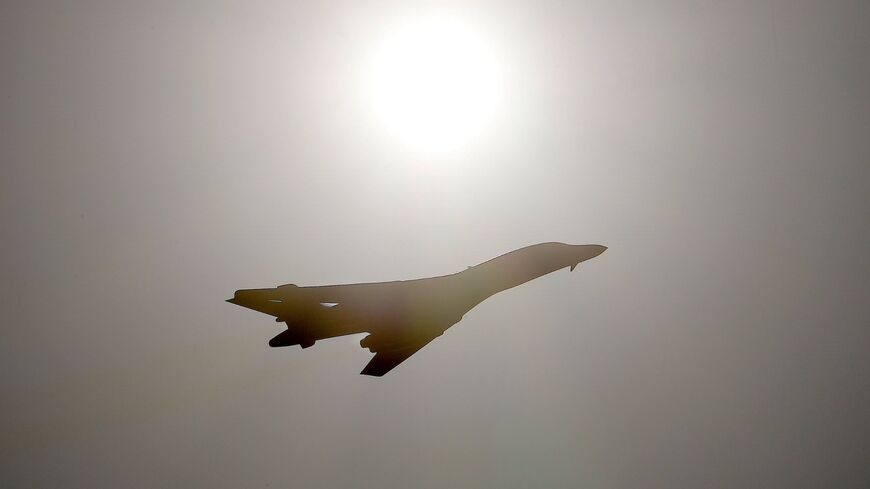 The US flew a nuclear-capable B-1B bomber over major waterways of the Middle East, the Air Force said Sunday, in Washington’s latest show of force amid tensions and hopes for renewed negotiations with Iran.

Aircraft from US partners Saudi Arabia, Egypt, Bahrain and Israel joined the bomber at various stages of the flight, which included a pass over the Strait of Hormuz, a chokepoint on the global oil trade and site of years-long tensions between the US and Iranian navies.

The B-1 also reportedly flew over the Red Sea, Suez Canal and the Bab al-Mandeb.

The bomber took off from the US airbase on Diego Garcia, a remote island in the Indian Ocean that is likely to become increasingly important as Washington seeks to further shift the weight of its military presence from the Middle East to Asia and the Pacific.

An undisclosed number of B-1Bs deployed to Diego Garcia last month to bolster US bomber task force missions in the Pacific, marking the first such deployment to the island in more than 15 years, according the US Air Force.

Also on Sunday, the US Navy’s Fifth Fleet released a photo of an explosion caused by an American F-16 dropping live munitions on a practice target in the Persian Gulf.

The public displays came hours after US President Joe Biden said indirect negotiations with Iranian officials in Vienna would resume after three months’ delay. A date for returning to the talks has not yet been announced, but hopes have dimmed in recent months as Iranian negotiators have failed to return to the table while publicly floating additional demands.

The Biden administration has seen a negotiated return to the 2015 nuclear deal with Iran as the best way of ensuring Tehran’s accelerating nuclear enrichment is curtailed.

The previous US administration under President Donald Trump abandoned the deal in 2018 with the support of Israel and Saudi Arabia, whose leaders felt the agreement did not do enough to limit Iran’s assertions of influence in the region.

The Trump administration enacted a campaign of heavy economic sanctions in place of the accord in a bid to roll back Tehran’s proliferation of ballistic and cruise missiles, drones and other conventional weapons in support of militias in conflicts throughout the region.

That policy failed, US intelligence agencies have concluded, and Iran has not curtailed its support for proxy militias or weapons shipments to groups like the Houthi rebels in Yemen.

Suspected Iran-backed groups have also carried out a series of small-scale drone attacks on sensitive US military and intelligence sites in Iraq and Syria in recent months in an apparent bid to pressure US troops to leave the region.

The latest US bomber flight was the fifth of its kind conducted this year, the Air Force said. The US has repeatedly deployed nuclear-capable bombers to the Middle East for joint flights with regional air forces in a show of unity against Iran’s policies.

The Biden administration has said it would continue a Trump-era policy of seeking to convince leaders of Arab states to recognize Israel. The bid, dubbed the Abraham Accords, aims to strategically align Arab governments with the Jewish state to serve as a bulwark against expanding Iranian power.

Meanwhile, Washington plans to direct its strategic attention to the Asia-Pacific region as China builds up its military.