In a joint statement, the two countries pledged to continue their dialogue on the US-Egypt strategic partnership, regional cooperation and human rights. 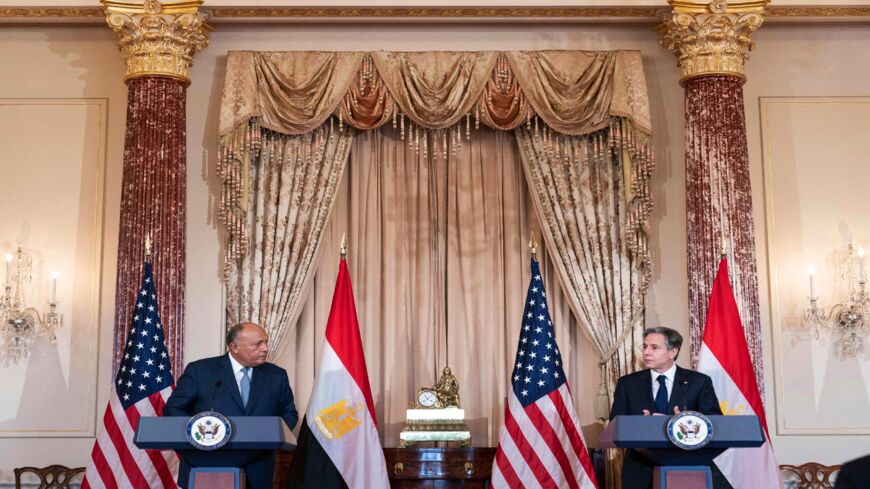 Egypt and the United States wrapped up their two-day “strategic dialogue” in Washington on Tuesday, pledging to continue talks over human rights, Egypt’s water security and resolving regional conflicts.

The talks led by US Secretary of State Antony Blinken and his Egyptian counterpart, Sameh Shoukry, are the first under the Biden administration.

“The United States and Egypt reaffirmed their steadfast commitment to the national security of both countries and to the stability of the Middle East,” read a joint statement on Wednesday.

“The United States expressed its appreciation for Egypt’s leadership in mediating solutions to regional conflicts, notably in promoting peace and ending violence in Gaza,” the statement said.

Egypt, which shares a border with Gaza, facilitated the truce in May that ended the 11-day conflict between Israel and militant group Hamas and is working to secure a longer-term cease-fire between the two sides.

Egypt, Sudan and Ethiopia are embroiled in a dispute over the GERD, which Addis Ababa is building on the Blue Nile, the main tributary of the Nile River. Cairo worries that the multibillion-dollar megadam could dangerously restrict its own freshwater supplies.

The coup in Sudan received only a passing mention in the joint statement. The Wall Street Journal reported last week that President Abdel Fattah al-Sisi, who himself seized power in a coup in 2013, personally blessed Lt. Gen. Abdel Fatah al-Burhan’s military takeover.

Cairo did not add its name to a recent joint statement issued by the United States, the United Kingdom, Saudi Arabia and the United Arab Emirates that called for a “full and immediate restoration" of Sudan's "civilian-led transitional government."

During remarks on Monday, Blinken described the events in Sudan as “dangerously destabilizing” and said the United States and Egypt have “shared interests” in Sudan’s democratic path.

Questioned over what those overlapping interests are, State Department spokesperson Ned Price said Monday he would “leave it to Cairo to explain their position on Sudan.”

The joint statement on Tuesday also referenced “the US role in economic development in Egypt and its supply of defense equipment.” Egypt has received $1.3 billion in foreign military financing annually from the United States since 1987, making it the second-largest recipient of US military aid after Israel.

In September, the administration announced it would withhold $130 million of that annual assistance until Egypt met certain conditions, which reportedly include the release of 16 political prisoners and ending a decade-old investigation of human rights defenders and civil society groups.

The joint statement described the dialogue on human rights and fundamental freedoms as “constructive.” However, Egypt made no public commitments to rights reforms.

In recent years, Sisi’s security apparatus has jailed tens of thousands of journalists, activists and other perceived critics, including several US citizens and residents who Egypt says pose a national security threat.

During a joint press conference with Shoukry on Monday, Blinken welcomed Egypt’s National Strategy for Human Rights and the lifting of its state of emergency in place since 2017.

Human rights activists have pressured the Biden administration to take a tougher line on Egypt. They point out that days after Sisi lifted the nationwide state of emergency in late October, the Egyptian parliament passed legislation granted him wide-ranging judicial authority.