UK Prince Charles and his wife Camilla, Duchess of Cornwall, arrived in Egypt on Thursday for a two-day visit as part of their first tour since the start of the COVID-19. 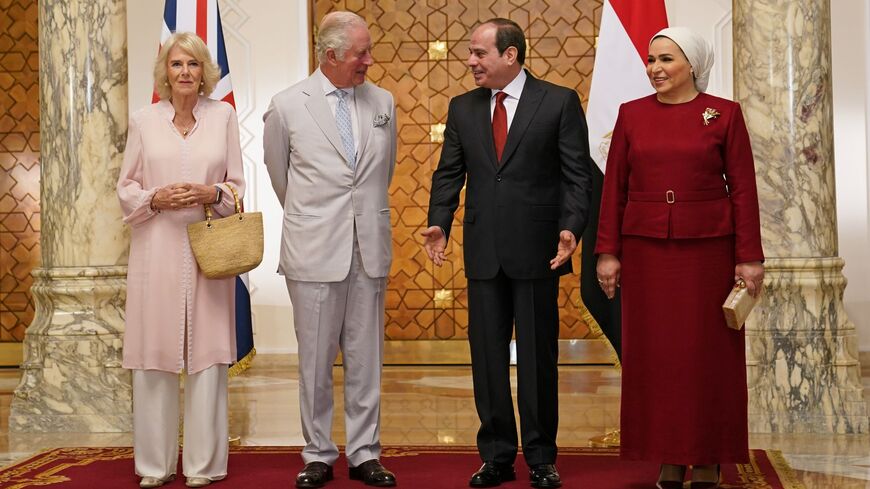 Prince Charles, heir to the British throne, and his wife Camilla, Duchess of Cornwall, arrived in Egypt today for a two-day visit as part of their first tour since the start of the COVID-19. They paid a visit to Jordan two days ago.

As they stepped off their plane, the pair were greeted by Minister of Tourism and Antiquities Khaled El Anani and the United Kingdom's Ambassador to Cairo, Gareth Bayley, OBE.

President Abdel Fattah El Sisi and his wife, Intissar Amer, received the couple at the Ittihadiya Palace in Cairo, where they discussed combating terrorism and extremist ideology.

Sisi affirmed Egypt's solidarity with the UK in the face of terrorism following the recent terrorist incident in Liverpool. Prince Charles praised Egypt's efforts in confronting extremist ideas and combating terrorism. The meeting discussed cooperation in many fields, especially university education and health, in addition to coordinating on climate change issues.

Intissar El Sisi wrote on her Facebook page that she and Camilla talked about empowering women, whether within the government or parliament.

The royal couple visited Al-Azhar mosque, the oldest Sunni institution in the Muslim world, and met with the Grand Imam Ahmed Al-Tayeb. They talked about the role of faith in preserving the environment as well as strengthening religious ties between the UK and Egypt.

Camilla visited the low-income neighborhood of Ezbet Khairallah in Old Cairo to inspect a community initiative under the supervision of the British Council to empower women to be breadwinners.

The visit came in the context of cooperation between the two countries after the COP26 climate summit. Egypt’s Red Sea city of Sharm El Sheikh has been officially selected to host next year’s UN climate change conference (COP27) next November.

In his speech at the Glasgow COP26 Conference last month, Sisi vowed that his country would seek to enhance international climate action to achieve the goals of the Paris Agreement during Egypt's presidency of the COP27.

Africa produces about 4% of the world’s carbon emissions. The president called for the international community to finance the continent’s challenge to respond to climate change.

El-Sayed Hegazy, Parliament's Secretary of the Energy Committee, hailed the Prince’s visit and said “it shows the world Egypt is a safe country.” He told Al-Monitor that Egypt is planning to increase the supply of electricity generated from renewable sources to 20 percent by 2022 and 42 percent by 2035.

According to the 2035 strategy, Egypt plans to produce 61,000 megawatts of renewable energy through solar and wind power. In October, Egypt signed two agreements for establishing a 500MW wind farm in the Gulf of Suez area.

“The prince's visit to Al-Azhar is an important message to the world that Egypt is witnessing a boom in relations between religions and religious tolerance," Evelyn Matta Botrous, MP of Industry Committee, told Al-Monitor. “Egypt is not just for Egyptians themselves. It hosts millions of refugees and no one of them feels foreignness. We Egyptians are loving all people.”

On Oct. 10, Sharm El-Sheikh International Airport received its first flight from London following the removal of Egypt from the UK’s travel COVID red list on Sept. 17. In the first week of November, the Egyptian carrier EgyptAir kicked off its direct flight from Heathrow to Luxor.

Alaa El-Ghamry,  a tourism expert and former member of the Egyptian Travel Agents Association, told Al-Monitor that Egypt will witness an increase of British tourists following the prince's visit — especially when Egypt is currently preparing for major festivals like the Pharaonic-themed parade in Luxor scheduled on Nov. 25 and the opening of the Grand Egyptian Museum.

Prince Charles and Camilla visited Egypt in March 2006, as part of a two-week tour, which included Egypt, Saudi Arabia, and India. The prince's first visit to Egypt was in 1981, on his honeymoon with his late first wife, Princess Diana. After more than ten years passed, Princess Diana visted Egypt in August 1992.