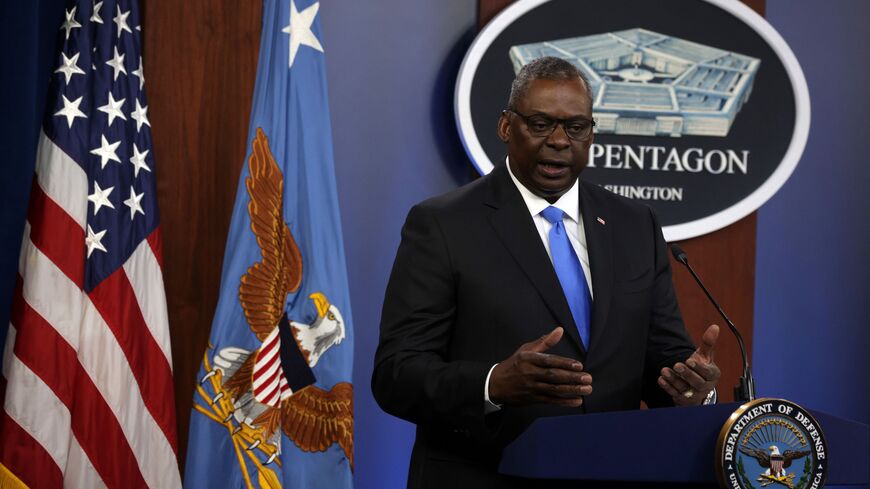 US Defense Secretary Lloyd Austin arrived in Bahrain earlier today with plans to speak with a number of Middle Eastern officials amid concerns over Russia and China’s inroads in the Gulf.

While no meetings have yet been made public, the Saudi, Egyptian and Libyan foreign ministers will be in attendance at the Manama Dialogue forum, along with dozens of other senior regional officials.

Austin is set to address the forum on Saturday morning before heading to the United Arab Emirates to discuss the “two countries’ common defense priorities,” the Pentagon chief told reporters this week.

The visit marks the top US defense official’s second trip to the Gulf region in just over two months.

Why it Matters: Washington is attempting to assuage Gulf allies’ concerns about US retrenchment from the region.

On Saturday, Austin will become the highest-level administration official yet to speak before a public audience in the Middle East.

His visit also comes as anticipation mounts over the Pentagon’s expected completion of a sweeping internal review of the distribution of its forces around the globe.

“There’s a misperception in the region that the redeployment of certain [military] assets is commensurate with reduction in US commitment,” a senior defense official attending the trip told reporters on the condition of anonymity. “One of the points that the secretary will make is that is just not true.”

After a series of sudden and uncoordinated withdrawal orders during the Trump administration, current US officials have been at pains to emphasize that American troops are not leaving Iraq or Syria and that the military will retain its major bases in the Gulf.

Still, there are concerns that the chaotic withdrawal from Afghanistan, last year’s removal of Patriot air defense systems and recent deliberation over reducing carrier strike group deployments in the Persian Gulf could further encourage Arab allies to explore defense partnerships with US adversaries Russia and China.

Secretary Austin’s visit also comes within a broader diplomatic blitz by American officials seeking to reassure allies ahead of a planned return to indirect negotiations with Iran over returning limiting Tehran’s nuclear program.

Following meetings in Riyadh on Wednesday, US officials and the Gulf Cooperation Council released a joint statement condemning Iran’s nuclear enrichment and weapons proliferation in the region but expressed support for diplomatic engagement with Tehran.

“Members of the GCC briefed on their efforts to build effective diplomatic channels with Iran to prevent, resolve or de-escalate conflicts, backed by strong deterrence and defense cooperation with the United States,” the statement read.

“The US and the members of the GCC affirmed that deeper economic ties after the lifting of US sanctions under the JCPOA are in the mutual interest of the region.”

Austin reiterated his supporting role in the diplomacy during a press conference at the Pentagon on Wednesday.

“I’m going to continue to be very clear: we will defend ourselves, our partners, and our interests against threats from Iran or its proxies,” he said.

What’s Next: The defense chief won’t be making any major announcements during the trip, but will call for increased multilateral cooperation in a number of areas, the senior defense official said.

In Abu Dhabi, Austin is likely to continue discussions with Emirati leaders on steps towards ensuring the security of the F-35, the sale of which the Biden administration has reaffirmed commitment to.

“We have every confidence that the UAE will uphold those commitments and expectations,” the senior defense official said.

Know More: The Wall Street Journal reported earlier today that the Emirati officials have halted construction on what US officials suspect was a Chinese military facility at a port in the UAE.