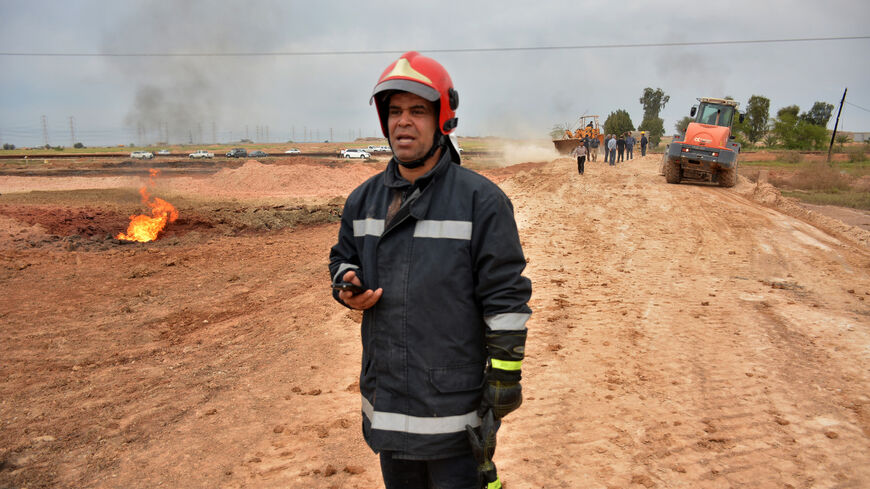 An Iranian firefighter works at the scene of a gas pipeline explosion near a road between the cities of Ahvaz and Mahshahr in Iran's oil-rich Khuzestan province on the border with Iraq on March 14, 2019. - FARS NEWS AGENCY/AFP via Getty Images

State media outlets reported that an oil pipeline in southern Iran exploded on Wednesday, marking the latest in a series of explosions and fires reported across the Islamic Republic this year.

The Iranian semi-official news outlet Tasnim reported the blast occurred Wednesday morning in the oil-rich western province of Khuzestan. The report read that the explosion, which it blamed on the pipeline’s aging infrastructure, “created small tremors” but no casualties. A local official said the fire had been extinguished.

In June, fires erupted at a steel factory in southeastern Iran and an oil refinery south of Tehran. That same month, the 680-foot (207-meter) Kharg — the Iranian navy's biggest ship — sank after catching fire in the Gulf of Oman.

Last month, sales at gas stations across Iran were crippled by what officials described as a cyberattack on the government-issued cards used by many Iranians to purchase subsidized fuel. The head of Iran’s civil defense blamed Israel and the United States for the incident, which came as Iran neared the second anniversary of deadly protests over an increase in gasoline prices.

A wave of fires and explosions hit Iran last year, including a huge blast in June 2020 at a military complex developing rockets and ammunition. Iran-watchers speculated that Israel, a longtime adversary of the Islamic Republic, was behind the blasts in an attempt to sabotage Iran’s nuclear weapons development.

The latest explosion came as Iran and world powers prepare to resume negotiations in Vienna on Nov. 29 aimed at salvaging the 2015 nuclear accord. Iran’s representative office in Vienna said Wednesday that Rafael Grossi, the director-general of the UN atomic watchdog, will visit Iran next week ahead of the talks.