Supporters of former Prime Minister Benjamin Netanyahu harassed two journalists who came to cover his trial and struck one of them with a cane. 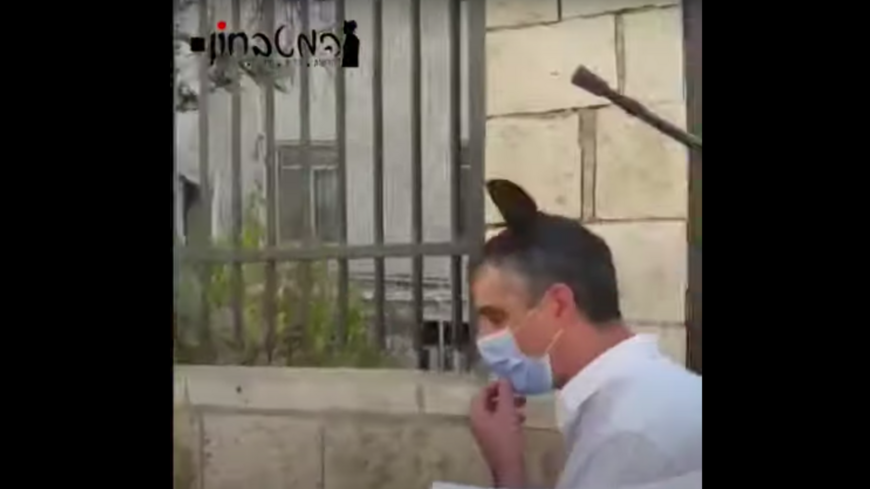 Channel 13 News correspondent Baruch Kra's yarmulke is knocked off his head by a cane outside the Jerusalem District Court during the trial of former Prime Minister Benjamin Netanyahu on Nov. 16, 2021. - unknown

Two senior justice correspondents for one of Israel’s major networks, Channel 13 News, were verbally harassed outside the Jerusalem District Court Nov. 16 while covering the trial of former Prime Minister Benjamin Netanyahu. One's yarmulke was knocked off his head by cane. While this was taking place, Netanyahu was inside the courthouse with his attorneys and several members of the Likud who had come to support him. Videos of the attacks soon went viral on the social media networks.

The correspondents — Aviad Glickman and Baruch Kra (whose yarmulke was knocked off) — are just two of several journalists targeted by associates of Netanyahu over the past few years for allegedly spreading propaganda against him. Netanyahu's trial, which pits the former premier and his supporters against major media figures, has inflamed an already familiar atmosphere.

The corruption and breach of trust trial has produced intense emotions on both sides. Netanyahu’s supporters believe that that the charges are an abuse of justice and that he was framed. They identify with him and share feelings of persecution.

We are just at the beginning of the Netanyahu trial, which is expected to last a long time. This toxic atmosphere will likely continue as long as the proceedings are underway.

“Something is going to happen here. The writing is on the wall in big, bold letters,” warned Glickman. In a radio interview he said, “What has been happening here over the last three years is a full-fledged, unprecedented campaign of incitement and division against the media. Yesterday it was a cane, but it could just as easily have been a knife.”

That same day, Channel 13 News opened its broadcast to the incident, pointing to Netanyahu as behind the dangerous tensions. Anchors Udi Segal and Tamar Ish Shalom described the scene and how the journalist’s yarmulke was knocked off.

Segal said, “This is not the first time that our correspondents and correspondents from other media outlets have been attacked on site while trying to do their job. The rise in the frequency of such incidents is easy to see over the last few years. Attempts to threaten correspondents and commentators.” Ish Shalom said, “What happened outside the courtroom in Jerusalem cannot be separated from the incitement against the media in general and specific journalists in particular by various politicians and public figures.”

Segal concluded, “This could be even more serious next time. Still, one thing is absolutely clear. It has not deterred us in the past, and it will not deter us in the future.”

The younger Netanyahu was referring to harassment of the right-leaning channel's journalists during the demonstrations against his father. The insults and curses were well documented, but not condemned by politicians on the left.

Shimon Riklin is one of Channel 20’s most popular anchors. He is also one of the most influential supporters of Netanyahu on social networks, with 160,000 followers on Twitter. He was attacked on numerous occasions while broadcasting live from Balfour Street. He tweeted, “Large parts of the Israeli media actively encourage violence against anyone they hate: the ultra-Orthodox, Jews living in mixed cities, settlers and supporters of the right, who in a racist manner call them 'the Bibi people.' They are the ones enabling attacks with this approach. These members of the press are the exact same ones who are so shocked that an old woman knocked Baruch Kra’s yarmulke off. You disgust me.”

Avishay Ben Haim, another journalist from Channel 13 and a supporter of Netanyahu, echoed the question: “Has the centrist media taken assaults on right-wing journalists lightly?”

Ben Haim was assaulted in July 2020 while covering the protests against Netanyahu when he was still prime minister. Videos that captured the incident show demonstrators grabbing his microphone and chasing him while cursing him and threatening his life. On Nov. 16, he once again shared the disturbing video of his attack on social media. While he condemned the attacks on the justice correspondents from Channel 13, he was also critical of the ongoing incitement against him.

Is the Israeli right more violent, as the left claims? Do the major news channels ignore attacks on right-wing journalists? It is a complicated issue, and efforts to find symmetry between the two sides misses the mark.

Attacks on journalists do originate from both the right and the left. It is also well documented that journalists from the right were attacked frequently during Netanyahu’s final year in power.

The issue is that in Israel in 2021, just about everything still links back to Netanyahu. He may have been voted out of office, but he is still the most central and influential political figure in the country. His trial, which is entering the evidentiary stage, is raising intense emotions and Netanyahu is fanning the flames. Journalists on the main news networks, justice correspondents in particular, are at least partly responsible for creating one-sided depictions of him. They often do not report on his courtroom successes overturning witness testimonies. They are failing to do their job.

Netanyahu enjoys broad public support. He also has overly zealous supporters, who are often emotionally charged when they arrive at court to follow the hearings. They then direct their anger at the journalists covering the proceedings. Netanyahu should have condemned the attack on Channel 13’s correspondents, but he won’t, considering his campaign to ​delegitimize the mainstream media.

On the other hand, politicians from the center-left should have condemned attacks on right-wing journalists in real time. They didn’t do that either, for political reasons of their own. Some of them avoid giving interviews to Channel 20, claiming that it is not a news organization but a collection of propagandists.

In a world of social networks and decentralized media, no one media outlet has a monopoly on public opinion anymore. Netanyahu is well aware of this, so he accuses the media of bias, which only makes journalists' jobs more dangerous.