Despite Lebanon's economic crisis and Hezbollah being unlikely to launch a war amid such a dire situation, defense analysts warn that war is still possible. 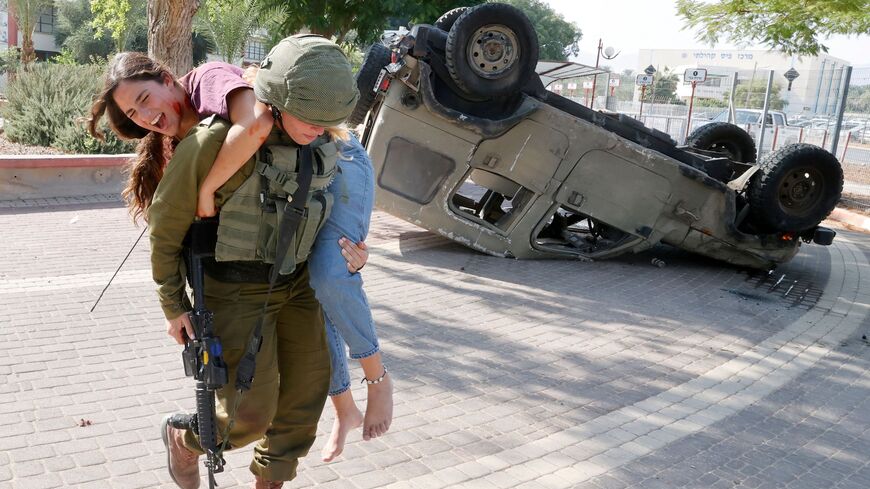 Israel conducted a Home Front Command exercise Nov. 3 to test its readiness for all-out war with Hezbollah. Based on intelligence evaluations of Hezbollah capabilities, hundreds or thousands of rockets could be fired on Israel by Hezbollah over days or weeks. Most would be short range but some could reach anywhere in Israel. Simultaneously, rocket fire could begin from the Gaza Strip and perhaps even Syria, Hezbollah’s elite fighters could try to infiltrate Israeli communities and army outposts and riots could break out in the West Bank.

The likelihood of an all-out war of this type is low but not zero. Lebanon is currently in one of the most severe crises in its history, significantly lowering the odds that the Hezbollah will initiate fighting. On the other hand, we know from experience that Hezbollah Secretary General Hassan Nasrallah could change his mind at any minute and start a war just to unite his ranks in Lebanon against an external enemy.

There is also a chance that war between Israel and Hezbollah could break out not due to a conscious decision by one of the sides, but as a result of multiplying skirmishes that get out of hand and force escalation. Several such events have taken place in recent years that could have developed into extensive confrontations, but were avoided by mutual deterrence mechanisms on both sides.

It is clear, however, that despite the relative quiet on the borders, both Hezbollah and Israel have been arming themselves for the last 15 years. As time goes on, the odds increase of an escalation that could be short or spark several days of fighting. It is very difficult to anticipate the dynamics that would be created, and the sides could find themselves in an unplanned and widespread war similar to the fighting in 2006.

Today, Hezbollah is estimated to have about 70,000 rockets, most of them with a range of 45 kilometers from the Lebanese border and some capable of reaching almost all of Israel. Hezbollah also has thousands of other missiles with short ranges but heavy enough to cause extensive damage to Israeli communities close to the border.

Hezbollah also possesses dozens of precision missiles that worry Israel’s security establishment because they could hit strategic sites like power stations, electrical grids, gas rigs and even the Iron Dome batteries deployed throughout Israel. It is estimated that Hezbollah would shoot more than 1,500 rockets every day in fighting Israel, some of them in heavy salvos on specific areas to challenge Israel’s air defenses.

Under such circumstances, Israel’s defense systems — including the Iron Dome — would not be able to achieve the impressive 90% interception rates of past conflicts with Gaza. In fact, Israel would probably need to use the interceptors sparingly, prioritizing certain regions and strategic sites such as power stations and air bases over its citizens.

This past week, Israel practiced passive defense tactics in a Home Front exercise: civilians practiced entering secure spaces within a warning time of 15 seconds to a minute and a half, in accordance with distance from the border. The problem is that about 30% of Israeli citizens lack a safe room such as an underground shelter or secure space reinforced with ironed-cement instead of brick walls, meaning that despite the grand exercises held this week, Israel’s home front is sadly lacking.

Israel is also preparing for other severe threats such as unmanned aircraft and advanced anti-tank and anti-aircraft missiles that could threaten the supremacy of Israel’s air force.

The Nov. 3 exercise also tested the evacuation of citizens from communities close to the border not only in consideration of Hezbollah's short-range mortars, but also in light of other threats, especially the Radwan units training to penetrate Israeli territory.

Radwan units are thought to number thousands of fighters who have gained operational experience in the Syrian civil war. In Nasrallah's plan called “Conquering the Galilee,” Hezbollah tasks them with moving secretly into Israeli territory, taking control of Israeli positions and communities and killing, injuring and kidnapping Israelis. In addition to these goals, such tactics also intended to disrupt Israeli efforts to enter Lebanon and bring the fighting into Israeli territory.

One option for Israel is using its superior engineering capabilities to make it difficult for Hezbollah fighters to cross. Israel recently authorized a budget for building a new security fence the length of its border with Lebanon.

Israeli war plans involve extensive attacks from the air and quick penetration into Lebanese territory with the goals of killing as many Hezbollah fighters as possible, disrupting Hezbollah’s chain of command and control and destroying Hezbollah infrastructure. Israel will not only target the terror organization but also the Lebanese state, which Israel holds responsible for what takes place in its territory.

Clearly, Israel would be harmed in such a scenario. Israeli citizens and soldiers would be killed and wounded and structures and infrastructure would be demolished. However, without underestimating Hezbollah, the military balance of power between the terror organization and Israel, with its fighter aircraft and advanced weapons, is clear.

That being said, modern wars are not decided entirely militarily and involve the media and public opinion. If Hezbollah manages to plant its flag in an Israeli community or surprise it in some other way, Israelis could be shocked and demoralized.