Iran claims its naval forces thwarted a US attempt to confiscate oil from an Iranian tanker, yet Washington denies the incident even occurred. 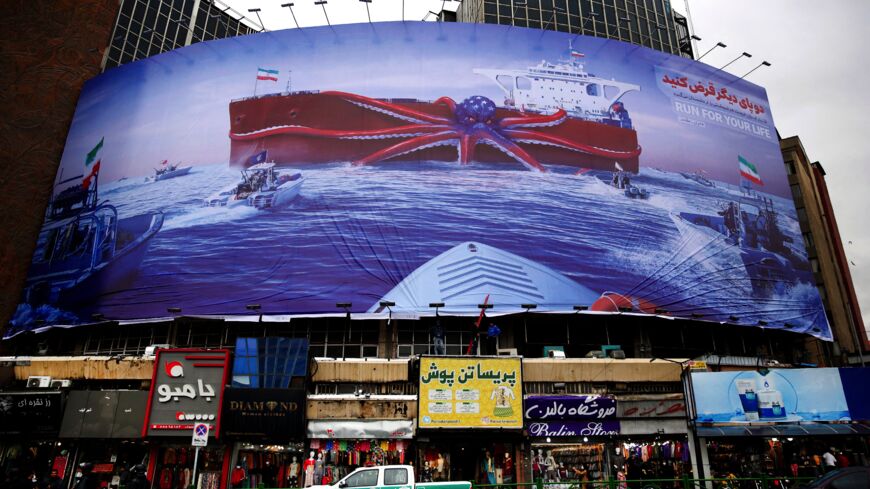 A billboard depicting Iranian Revolutionary Guard Corps navy units observing a US warship in the Gulf of Oman is seen at the Vali-Asr Square in Tehran on Nov. 5, 2021. The United States and Iran gave sharply differing accounts of an incident involving a Vietnamese-flagged oil tanker in the Gulf of Oman in the latest incident in the heavily trafficked seaway. - STR/AFP via Getty Images

The head of Iran's Islamic Revolutionary Guard Corps (IRGC) thanked members of the Iranian navy forces one week after Tehran claimed that it thwarted a US attempt to confiscate Iranian oil.

Hossein Salami, head of the IRGC, said that the incident was a “humiliation for an empire on the decline.” He said that while the encounter was limited in scope, the “range of humiliation” for the United States was much wider, adding that the incident will be recorded as a historical event along other great dates in history.

On Nov. 3, Iran claimed that a US ship had attempted to confiscate an Iranian oil tanker. As part of actions against the Iranian government and as part of their sanctions program against Iran selling its oil, the United States has confiscated Iranian tankers in the past. Iran claimed that the United States Navy was preparing to empty the contents of the tanker onto another ship but were thwarted by members of Iran’s IRGC naval forces. However, shortly after the Iranian claims were made, Washington denied any encounter with Iranian forces during that time. Pentagon spokesperson John Kirby called it “absolutely, totally false and untrue.”

Perhaps for domestic political reasons or ahead of a major negotiation on the nuclear file, Iran is still insisting that the incident took place. Salami even said that if the United States had a single positive action in the encounter, they would publish the video of it. Iran itself, despite showing video footage of previous encounters in the Persian Gulf and other waters in the region, has not shown any footage either.

Admiral Alireza Tangsiri, head of the IRGC navy, also spoke about the alleged Gulf of Oman encounter. Tangsiri described the specific details of the incident, including a play by play and the number of ships involved. In explaining their success, Tangsiri said that based on their previous assessments, they were “prepared for a large operation.”

Deputy Foreign Minister Ali Bagheri, who will lead the negotiations, is currently in Paris to meet with his French counterpart. Bagheri told Iranian media that the negotiations in Vienna on Nov. 29 will not be nuclear negotiations because the terms of the nuclear deal were already determined within the Joint Comprehensive Plan of Action in 2015. He said that the talks will be about how the United States will reenter the deal and remove sanctions.

In response to the US exit in 2018, Iran took steps away from the terms of the deal, particularly with increased enrichment. Iran claims that its steps are reversible once the United States lifts sanctions and reenters the deal. Iran also reportedly wants guarantees that the United States will not leave the deal again.