Arman Abdolali was sentenced to death after what Amnesty International said was a "grossly unfair trial" that relied on "torture-tainted confessions" he later withdrew. 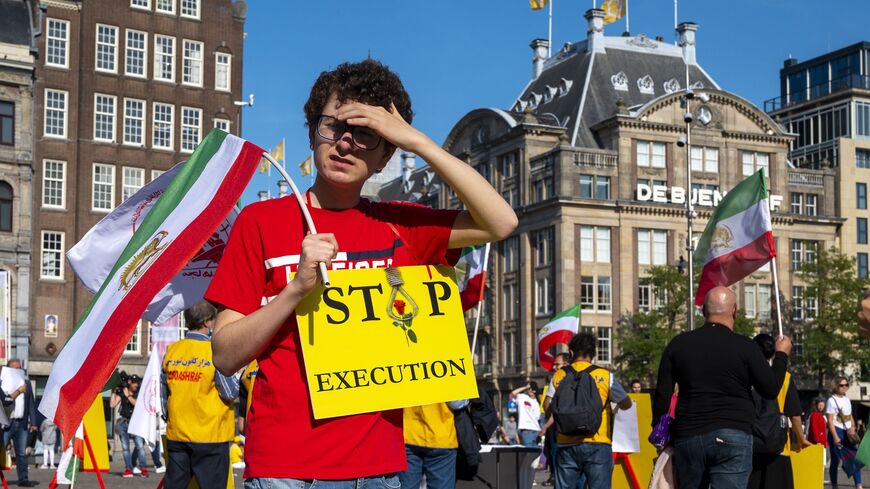 A man holds a sign and a Iranian flag during a demonstration on the Dam Square in Amsterdam, the Netherlands, on Sept. 13, 2020, against Iranian wrestler Navid Afkari's execution in the southern Iranian city of Shiraz. - EVERT ELZINGA/ANP/AFP via Getty Images

An Iranian man convicted of murdering his girlfriend when he was a teenager was executed on Wednesday, despite an international outcry over his death sentence.

Arman Abdolali, 25, was hanged at dawn at the Rajai Shahr prison in the city of Karaj, west of Tehran, according to Iran’s Mizan news agency.

Iranian authorities had accused Abdolali of murdering his girlfriend, Ghazaleh Shakoor, who disappeared in 2014 and whose body was never found. He was 17 at the time of her disappearance.

Abdolali was first sentenced in December 2015 following what Amnesty International described as “a grossly unfair trial” that relied on torture-induced confessions, which Abdolali later recanted.

His execution had been delayed twice following outrage from the United Nations and human rights groups who said Iran was ignoring its obligations under international law.

In October, a group of UN human rights experts urged Iran to halt Abdolali’s execution amid reports that he had been tortured while in solitary confinement as a teenager. The experts also called on the Islamic Republic to “unconditionally abolish the sentencing of children to death,” noting Iran reportedly has more than 85 juvenile offenders on death row.

The Convention on the Rights of the Child, of which Iran is a state party, bans the use of capital punishment for those who were under 18 at the time their alleged crime. In 2020, Iran executed at least three people in violation of that convention, Amnesty said.

The London-based rights group said Iran carried out at least 246 recorded death sentences in 2020, making it one of the world’s most frequent executioners.

by Haitham EL-TABEI with AFP correspondents in the Middle East | AFP | May 17, 2022
END_OF_DOCUMENT_TOKEN_TO_BE_REPLACED