The military judiciary in the Gaza Strip announced this month new death sentences against collaborators with Israel and drug dealers, amid calls by human rights organizations to stop these illegal and nonhumanitarian sentences. 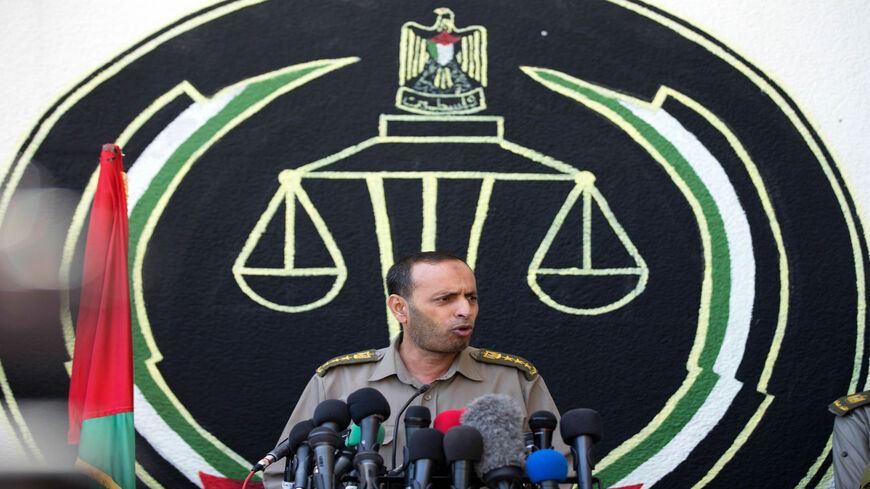 Head of the military court, Nasser Suleiman, speaks to the press after a Gaza court sentenced three men to death over the assassination of a Hamas military commander that the Islamist movement accused Israel of masterminding, Gaza City, Gaza Strip, May 21, 2017. - Mahmud Hams/AFP via Getty Images

GAZA CITY, Gaza Strip — The military judiciary in the Gaza Strip announced Nov. 9, in a statement published on the Ministry of Interior and National Security website, that it had issued death sentences against three Palestinians. Two of them were convicted of collaboration with Israel and the third of drug trafficking.

The rulings raised the number of death sentences rendered since the beginning of the year to about 20, amid calls by human rights organizations to permanently abolish the death penalty.

On Oct. 28, the military court in Gaza also sentenced six Palestinian informants with Israel to death. It urged them to surrender themselves to the judicial authorities to benefit from a reduced sentence.

Al Mezan Center for Human Rights in Gaza expressed, in an Oct. 21 statement, its grave concern over the “incessant issuance of death sentences by the military judiciary in the Gaza Strip.” It called on the competent authorities “to establish a moratorium on the use of the death penalty with a view to its definitive abolition.”

It noted that these sentences go against Palestine’s obligations that arise from its accession to international treaties.

Samir al-Manaama, a lawyer at Al Mezan Center for Human Rights, told Al-Monitor, “We have reservations on the death sentence, as it does not reduce crime and protect society from it. Therefore, we call for amending Palestinian laws in line with international treaties to which the State of Palestine has become a member, by abolishing the death penalty and coming up with alternatives that preserve human dignity.”

The Independent Commission for Human Rights (ICHR) also strongly condemned the recent death sentences in an Oct. 21 press statement. “ICHR believes the death sentences issued by the courts in the Gaza Strip, amounting to 20 sentences since the beginning of 2021, impinge on a number of fundamental human rights, foremost of which is the right to life. These sentences violate the international laws and conventions that oppose this punishment as well as the obligations ensuing from the accession of the State of Palestine to these conventions, including the abolishment of the death penalty,” the statement said.

Ibrahim added, “Human rights organizations stress the need to refrain from the ratification of the issued death sentences as this would be a preliminary step for the abolishment of the death sentence from Palestinian legislation.”

Palestinian law requires presidential ratification of death sentences emanating from the Gaza Strip. But Palestinian president and leader of the Fatah movement Mahmoud Abbas has refused to authorize the execution of these sentences since taking office in 2005. According to a previous Human Rights Watch report, Hamas had refrained from carrying out judicially imposed death sentences since the two movements signed the reconciliation agreement in the spring of 2014.

Maj. Gen. Nasser Suleiman, head of the Military Judiciary Authority in Gaza, said that according to Article 109 of the amended Palestinian Basic Law of 2005, a death sentence pronounced by any court may not be implemented unless ratified by the president of the Palestinian National Authority (PNA). “This is also stipulated in accordance with Article 409 of the Code of Criminal Procedures Law of 2003,” he told Al-Monitor.

He noted that Article 46 of the Palestinian Basic Law authorized the Council of Ministers to assist the president in the performance of the president’s duties and exercise of powers, in the manner stipulated in this law. He explained that the Legislative Council in Gaza relied on this article when it approved the implementation of death sentences issued by Palestinian courts in 2017.

Rami Abdo, Chairman of the Euro-Mediterranean Human Rights Monitor, told Al-Monitor, "The state of legislative void in Palestine is due to the division that led to the absence of a unified penal code.”

He explained that there are different penal code laws. In the West Bank, courts apply the Jordanian Penal Code No. 16 of 1960, and in Gaza, the British Mandate Criminal Code No. 74 of 1936 is applied, as amended by order of the Egyptian military governor No. 555 of 1957. The military courts, and state security courts sometimes apply the PLO Revolutionary Penal Code of 1979, in addition to some complementary laws.

Abdo noted, “The political division, the president's refrain from ratifying death sentences and the fact that judicial authorities can still execute these sentences — although not ratified — after the lapse of the period of time specified in the law has stirred a legal controversy about the validity of these sentences.”

“The death punishment is irreversible and errors may occur in judgments. The risk of executing an innocent person can never be ruled out,” he warned.

Amid speculation that Hamas may not implement these rulings at the present time, the death sentence against informants remains one of Hamas’ applied tactics given the series of assassinations carried out by Israel with the help of Palestinian informants. Meanwhile, the political division and the outdated laws in the Palestinian territories have created a vicious cycle preventing any balance between respecting the rights of individuals and protecting the public interest.