The political tension that was born in Ethiopia after a number of ethnic nationalities forged an alliance to topple the Abiy Ahmed government is raising many questions about the fate of the regional conflict over the Grand Ethiopian Renaissance Dam. 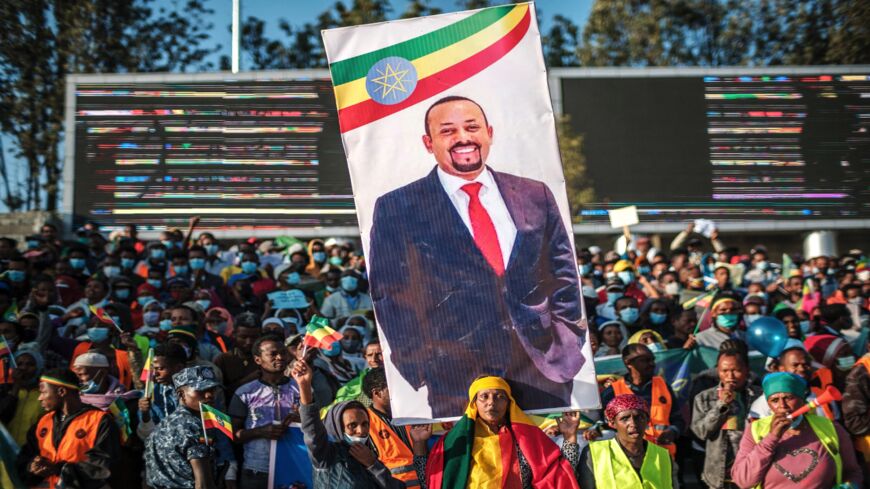 A woman holds a banner with the portrait of Primer Minister Abiy Ahmed during a rally in Addis Ababa, Ethiopia, on Nov. 7, 2021, in support of the national defense forces. Five days after the government declared a state of emergency throughout the country, tens of thousands of Ethiopians vowed at a pro-government rally in Addis Ababa on Nov. 7 to defend the capital against Tigrayan rebels and denounced diplomatic efforts to end the conflict in the north of the country. - EDUARDO SOTERAS/AFP via Getty Images

CAIRO — Nine ethnic groups formed a united front Nov. 5 to overthrow Ethiopia's Abiy Ahmed government in what raises questions about the possible scenarios that could unfold, as internal tensions linger due to the regional conflict between Ethiopia on the one hand and Egypt and Sudan on the other over the Grand Ethiopian Renaissance Dam (GERD).

The conflict, which started a year ago between Ahmed’s regime in Ethiopia and the Tigray People’s Liberation Front (TPLF), turned into a direct clash after other rebel fronts joined the TPLF in order to bring down Ahmed. The TPLF fighters and the Oromo Liberation Army are now stationed dozens of kilometers from the capital, Addis Ababa, which puts Ahmed’s regime in a political and security stalemate as the government tries to harness all financial and military capabilities to keep things under its control.

Observers of African political affairs believe that the ongoing tension and conflict in Ethiopia infer that a number of scenarios lie in store for the regional dispute over the GERD and the stalled path of negotiations sponsored by the African Union.

Hani Raslan, an expert on African affairs at the Al-Ahram Center for Political and Strategic Studies, told Al-Monitor, “As long as Ethiopia does not have an independent authority agreed upon by the different nationalities, it would be impossible for a project such as the GERD to go on, especially considering that this is a project that the Ethiopian people polarize upon. After all, the government needs support for its efforts to continue building the dam as a national project.”

Raslan said the political scene in Ethiopia is complicated, adding, “There is a great political dilemma between the survival of the Abiy Ahmed regime with its anti-federalism policy that consists of transferring power to the center within the framework of a unified state and central hegemony, and the nationalities that are becoming aware of their interests and are rejecting that any powers be taken away from them. Also, it is inconceivable that the Tigrayans return to rule Ethiopia despite the victories they achieved against the Abiy Ahmed administration after the Oromo revolution against them in 2018.”

“Completing a project the size of GERD needs a strong economy, but with the collapse of the Ethiopian economy and the withdrawal of investments, and as the absolute priority of the political system has become to preserve its survival, it has become difficult to complete the dam based on the announced schedule,” he said.

Raslan also believes that “there are questions about the future of the Benishangul region on which the dam is built in light of the current ethnic conflicts and the future of the united Ethiopian state. It remains to be seen whether this region would choose to remain in the state structure or unite with neighboring regions.”

Mohamed Abdel Wahed, an expert on national security and African affairs, told Al-Monitor, “It is difficult to predict whether or not the GERD project would be completed in light of the ongoing ethnic conflicts in Ethiopia. Also, one cannot say that the continuation of the war definitely infers an end to the project, especially considering that all political fronts in Ethiopia perceive GERD as a national project.”

“The current conflict may significantly postpone the construction works or the completion of the third filling phase, especially with the problems of financing and the directing of the budget for military operations,” he said.

Abdel Wahed expected the tension in Ethiopia to linger.

“The form of the conflict in Ethiopia and its ethnic dimensions portend the continuation of tension, especially considering that the current problem is primarily ethnic and ideological and lies between Abiy Ahmed’s will to abolish the federal system that is based on ethnicity and centralized power. This makes the integration under its current form a fragile one that is punctuated by deep and very complex conflicts with which the Abiy Ahmed regime failed to achieve peace on the internal and external axis,” he continued.

The GERD negotiations stalled last year as Ethiopia embarked on the second filling phase of the GERD reservoir without the approval of Egypt and Sudan. The two countries escalated the dispute to the Security Council, which recommended in a presidential statement on Sept. 15 the return of negotiations in order to reach a satisfactory agreement on the rules of filling and operating the dam. However, attempts on the part of Minister of Foreign Affairs of the Democratic Republic of the Congo Christophe Lutondola — in the country’s capacity as the head of the current session of the African Union — to have the three countries restart negotiations failed to come to fruition.

Cairo did not issue any official comments about the tense political situation in Ethiopia, but a statement by the Egyptian Foreign Ministry spokesperson on Dec. 31 had condemned statements by the Ethiopian Foreign Ministry spokesperson in which he addressed the internal affairs in Egypt and considered them a “blatant transgression.” The December statement said that “Egypt has always preferred to refrain from addressing in any way the internal situation and developments in Ethiopia."

Cairo, according to the statement, deemed “Ethiopia’s attempts to attack the Egyptian state as a continuation of the approach of employing a hostile tone to cover up the successive Ethiopian failures. It would have been better for them to pay attention to the deteriorating conditions and the conflicts and human tragedies in the Benishangul, Tigray and Oromia regions.”

“Egypt’s position is clear regarding developments in Ethiopia, and it is keeping its distance to preserve the good-neighborly policy. It also wants a secure and stable Ethiopia, especially considering the sharp differences over GERD, which Egypt believed could be solved through serious negotiations,” Abdel Wahed said.

Ethiopia had failed to complete the second filling of the Renaissance Dam. The quantities of water expected to be stored were estimated at 18.5 billion cubic meters but have thus far not exceeded 7 billion cubic meters at a level of 573 meters, as monitored by Egyptian experts via satellite last July.

Despite the escalating tension, Ethiopian Minister of Communications Houria Ali Mahdi expected in November that the GERD would start producing electricity with a capacity of 700 megawatts next year.

Anwar Ibrahim, an Ethiopian writer and journalist, told Al-Monitor, “Although the war has reached advanced stages, there are no differences within Ethiopia between the political and military components about the importance of GERD as a national project. The latter has been supported by several governments since Meles Zenawi, who laid the foundation stone, until Abiy Ahmed’s current government, which did not give up on it.”

Ibrahim said that the “problem in Ethiopia currently lies in an internal political dispute between the government and the Ethiopian army on the one hand and the Tigray People’s Liberation Front on the other over the principles of the ruling party. This dispute degenerated into a war in which other ethnic nationalities took part. However, we expect imminent solutions to the dispute amid the international attempts to pressure the two sides to the negotiating table."

“The conflict may delay the negotiation process or temporarily delay the construction process, but I think that the Ethiopian government is ready to resume negotiations despite the domestic developments,” he added.

Ibrahim said that the delay in the course of the GERD was not solely due to the Ethiopian domestic developments.

“After the January 25 Revolution, Egypt demanded that the dam construction be postponed until it rearranged its domestic cards, as stated by the Egyptian popular diplomacy delegation that visited Ethiopia in 2011. Also, after the 2019 revolution, Sudan tried to postpone the course of the negotiations,” Ibrahim said.

He added, however, that “Ethiopia is now saying that the dam construction will not stop."