The Lebanese army deployed in the streets of the capital after at least six people were shot dead during violent protests. 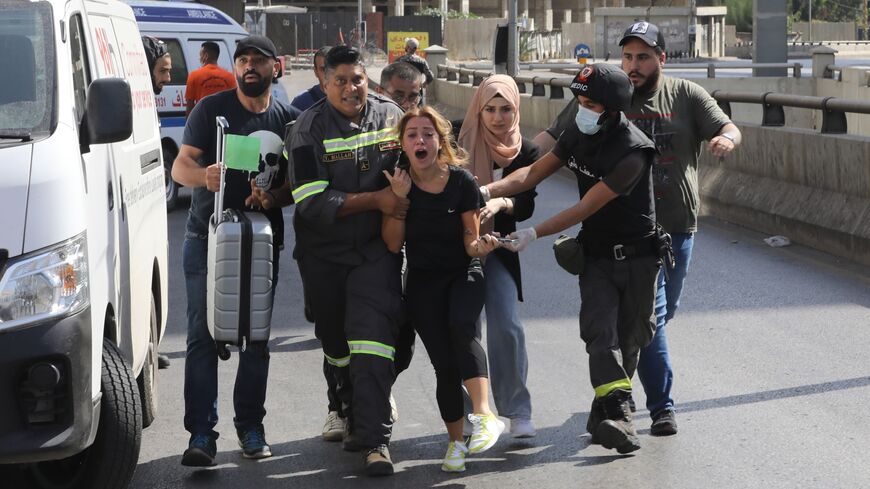 Medics evacuate residents after fierce fighting erupted near the Justice Palace in Beirut on Oct. 14. There are reports of six dead and 32 wounded after protesters demanded the dismissal of judge Tarek Bitar, responsible for investigating the explosion at the port of Beirut in 2020. - Marwan Tahtah/Getty Images

The Biden administration is sending Lebanon’s military an additional $67 million in a bid to keep the cash-strapped country’s largest functioning security institution from collapsing.

Victoria Nuland, the US State Department’s second-highest official, announced the new aid during a visit to Beirut on Thursday.

“Today, I’m pleased to announce an additional $67 million in new US support for the Lebanese Army, bringing our total of support this year to $187 million,” Nuland told journalists in the Lebanese capital.

But fears are growing that Washington’s support may be too little, too late, as the Lebanese army continues to face equipment and cash shortages despite new international donations.

Earlier on Thursday, gunfire broke out in south Beirut’s Tayouneh neighborhood during a protest by supporters of Hezbollah and another Shia party, Amal. Thursday’s fighting occurred near a neighborhood seen as a support base for the Christian nationalist Lebanese Forces party.

Hezbollah blamed the violence on Lebanese Forces gunmen, while the right-wing Christian party accused its Shia rival of “incitement.”

Six people have been reported killed so far, with at least 32 wounded, raising fears in the capital of a potential spiral into sectarian violence.

Nuland on Thursday urged calm while offering condolences to relatives of the dead and a harsh rebuke to Lebanon’s leaders for failing to move the country forward.

“Today, in our meetings, we underscored the importance of complete transparency and open books as Lebanon re-engages with the International Monetary Fund and the World Bank,” Nuland said. “The Lebanese people deserve to know where their money has gone and to have confidence in their economic future.”

Nuland also called for a “clean, impartial [and] independent judiciary” amid Lebanon’s investigation into responsibility for last year’s port blast.

Protesters led by Hezbollah and Amal on Thursday called for the judge overseeing the investigation to step down.

The judge, Tarek Bitar, issued an arrest warrant for Lebanon’s former finance minister, Ali Hassan Khalil, a Hezbollah ally, earlier this week after Khalil reportedly failed to appear before investigators in the probe into the port blast.

The Lebanese army, which deployed in the streets in response to the violence, said in a statement that protesters were fired upon as they marched towards the Palace of Justice. The army said it believed snipers were involved, but did not directly accuse any group.

The military arrested nine people in response to the attacks. Lebanon’s President Michel Aoun said those responsible for the violence will be held to account.

Lebanon did not have a functioning government for more than a year after a massive explosion devastated the city last August, killing more than 200 people.

A new cabinet was sworn in last month. Elections are set for next spring, but conditions in Beirut continue to deteriorate as the price of electrical generators and fuel grows increasingly out of reach for residents.