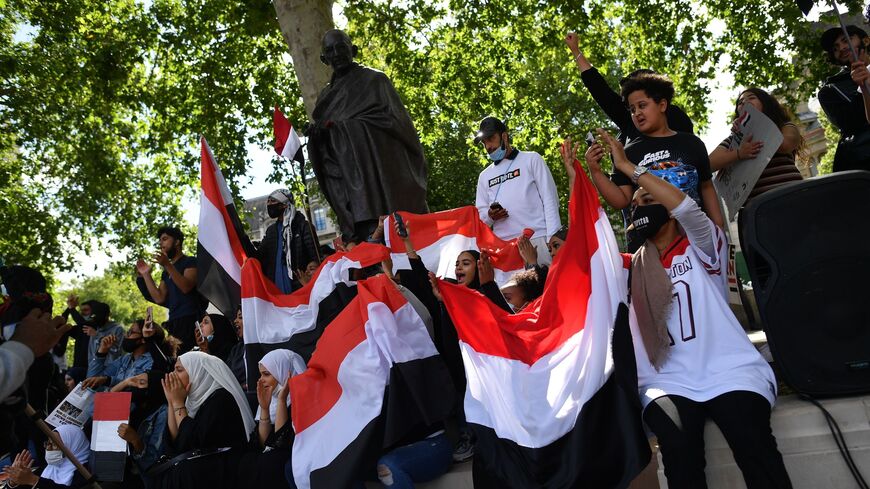 Protesters with Yemeni flags demonstrate in front of the statue of Mohandas Gandhi in London on July 5, 2020, against the continued conflict in Yemen. Tens of thousands of people, mostly civilians, have been killed and millions displaced in what the United Nations has called the world's worst humanitarian disaster. - JUSTIN TALLIS/AFP via Getty Images

Member states of the United Nations’ Human Rights Council voted to shut down the body's own mandate to investigate war crimes in Yemen’s civil war, dealing a major setback to those seeking accountability in the conflict.

Russia, Bahrain and 19 other countries voted against renewing the council’s mandate, shooting down a draft presented by European nations and Canada and led by the Netherlands.

Eighteen other nations, including the US, France, Germany, South Korea and Mexico voted in favor of the draft, while seven members of the council abstained. Ukraine did not register for the vote.

The failure marks the first time the UN’s human rights body has rejected a draft resolution in its 15-year history.

Saudi Arabia, which is not a party to the council and was thus unable to vote, has been accused of trying to shut down the experts’ investigation mandate in the past.

The experts found evidence in 2018 that all sides in the conflict have committed possible war crimes. Saudi Arabia, which has led the Gulf military coalition’s campaign against the Houthi rebels in Yemen since 2015, has also been accused of bombing hospitals and other civilian targets indiscriminately.

Yemen’s civil war has triggered the world’s worst humanitarian catastrophe, according to the UN.

The country is now largely in the hands of the Houthis, but fighting continues despite a ceasefire proposal put forth by Riyadh earlier this year.

Bahrain’s ambassador to the UN, Yusuf Abdulkarim, said during today’s debate that the body’s investigations had “contributed to misinformation” about the situation on the ground in Yemen.

“I cannot help but feel that this council has failed the people of Yemen,” the Netherlands’ ambassador to the UN Peter Bekker said today.

“With this vote, the Council has effectively ended its reporting mandate. It has cut this lifeline of the Yemeni people to the international community,” Bekker said.

Michelle Bachelet, head of the UN’s human rights council, expressed exasperation before the council at the failure to renew its mandate, saying parties to the conflict continue to “act with little regard to their obligations under international human rights and humanitarian law.”

“Numerous attacks targeting or disproportionately impacting civilians or civilian objects during the past year may amount to war crimes,” Bachelet said today.