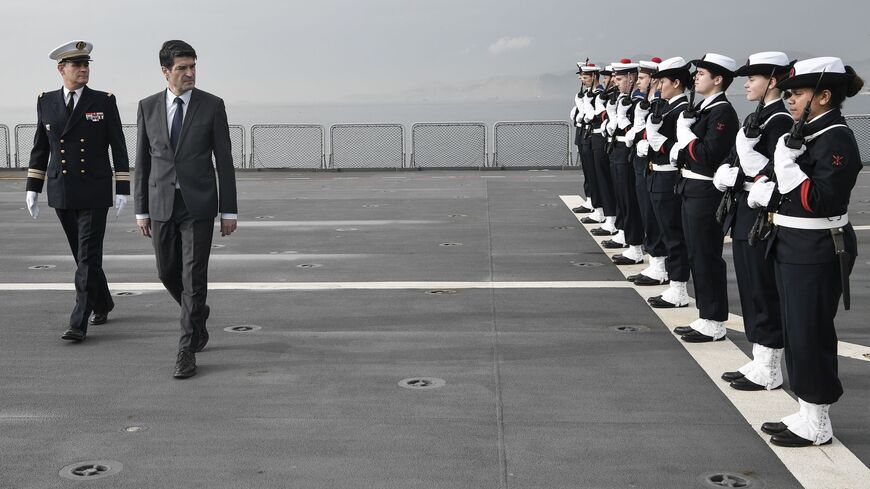 French ambassador to Greece Patrick Maisonnave (C) reviews troops onboard the French amphibious assault ship, Dixmude after its arrival to the port of Piraeus on Jan. 27, 2020 for an international exercise in the Mediterranean Sea. - LOUISA GOULIAMAKI/AFP via Getty Images

Despite the longstanding alliance and close military partnership between Turkey and the United States, the relationship has always been troublesome. For some time now, pundits and Turkey experts have tended to speculate on “who lost Turkey.” Although most of the observations have looked for an American culprit, it is now time to discuss for Ankara “who lost the United States?” as Turkey is on the verge of losing its key ally.

From the Eastern Mediterranean to Syria — the most important and crucial file in front of Ankara — Washington has increasingly sided with the rivals of Turkish President Recep Tayyip Erdogan. Recent developments have also indicated that Erdogan’s delicate game of pitting Russia and the US against each other also backfired in Washington.

A day before the Sochi summit, Greece and France signed a deal under which Athens will purchase three to four advanced frigates from Paris, delivered between 2025 and 2026. The frigates will be compatible with 24 Rafale jets that Greece acquired from France this year. The ambitious Franco-Greek military deal appears to be aiming to balance Turkish naval and air supremacy in the Aegean and Eastern Mediterranean, if not tip the scales in Athens' favor.

The dramatic Paris agreement also included a clause for mutual assistance in case of an armed attack against the territory of one of the two. “For the first time it is stipulated that there be military assistance in the event of a third party attacking one of the two states. And we all know who is threatening whom with a casus belli in the Mediterranean,” Greek Prime Minister Kyriakos Mitsotakis said following the deal. He was hinting that the unprecedented France-Greece deal was aiming to deprive Turkey of strategic dominance in the Eastern Mediterranean.

The deal came at an unfortunate time for Erdogan. Germany, which has sponsored Turkish naval supremacy in the Aegean, was preoccupied with its elections on Sept. 27. The elections mark the ending of Angela Merkel’s rule, which has long been criticized as lenient toward Erdogan’s policies.

What is noteworthy is Mitsotakis emphasizing the “Euro-Atlantic dimension” of the agreement, which he said was fully compatible with the Franco-German Aachen agreement. This approach makes the deal marketable as the first step for European strategic autonomy, which the US administration under Biden probably would endorse. This also signals Turkey's further marginalization within the Euro-Atlantic security system.

Emboldened with the deal reached with France, Greece is now enjoying American support with potential strategic implications in the Eastern Mediterranean. Greek Defense Minister Nikos Panagiotopoulos said Athens and Washington would likely agree to invest further in the four military bases already used by the American troops in Greece as part of the renewal of the Mutual Defense Cooperation Agreement (MDCA) between the two. Under the deal, the US troops has a rotating presence in the port of Alexandroupoli only a few miles away from Turkey’s frontier in northeast Greece and Stefanovikio, and Larissa air bases in central Greece, in addition to the Souda Bay naval base on Crete in the Aegean.

Panagiotopoulos described the United States as Greece’s “key strategic partner,” adding that the MDCA “reflects this relationship, which has been constantly upgraded over the last years.” Meanwhile, on Oct. 14 Greek Foreign Minister Nikos Dendias is meeting in Washington with US Secretary of State Anthony Blinken, who had described Erdogan’s Turkey as “an unreliable ally.”

The meeting comes on the heels of Biden’s decision to prolong the national emergency in northeastern Syria. Turkish action "threatens to undermine the peace, security, and stability in the region, and continues to pose an unusual and extraordinary threat to the national security and foreign policy of the United States,” Biden wrote in a letter to Congress on Oct 7.

Turkey’s Foreign Minister Mevlut Cavusoglu lamented the letter on social media. “Instead of blaming Turkey, the US should abandon its wrong policies. Also, it should be more honest with the American people and its Congress,” he wrote on Twitter.

Before Cavusoglu, Erdogan accused Brett McGurk, a high-level official of the Biden administration, of supporting terrorism. “He is director for the PKK and YPG. Of course, my statement will concern some people. We know it,” Erdogan said, referring to McGurk, the US National Security Council Coordinator for the Middle East and North Africa.

Erdogan’s accusation came on Sept 30, a day after he met with Putin in Sochi. Biden’s letter, which came a week later, indicates the extent of alienation between Washington and Ankara.

The Turkish government is now asking to purchase 40 new F-16s with a price tag of $6 billion. Excluded from the fifth-generation F-35 fighter jet program after acquiring the Russian S-400 air missile defense system, the Turkish air force now has to use the F-16 jets, but they are too old to be modernized.

However, the deal requires the approval of Congress — an unlikely prospect. Some Washington-based lobby groups and NGOs have already begun a campaign called “No Jets for Turkey” to pressure the Biden administration and Congress to stop the process.

Even if the process moves on, Congress will ask the administration whether Turkey is prepared to make a concession on the S-400. Erdogan has already reiterated that there will not be any step back on the matter.

If Congress blocks the sales of new F-16 jets, Turkey will be left more vulnerable, and relations between Ankara and Washington will be further destabilized.

The problem is that Erdogan has even less room to maneuver vis-à-vis Biden than he has with Putin. Nonetheless, he threatened a new operation against the US-backed Syrian Kurdish groups in northern Syria. The immediate result is a further weakened Turkish lira on Oct. 11. This signals that the Turkish ambitions in Syria cannot be sustainable.

Yet as much as he is cornered, an adventurous response in one of the conflict zones, either in the Eastern Mediterranean or in the Syrian theater, cannot be ruled out totally.