Facebook has been accused of acting at the behest of the Israeli government in the past. 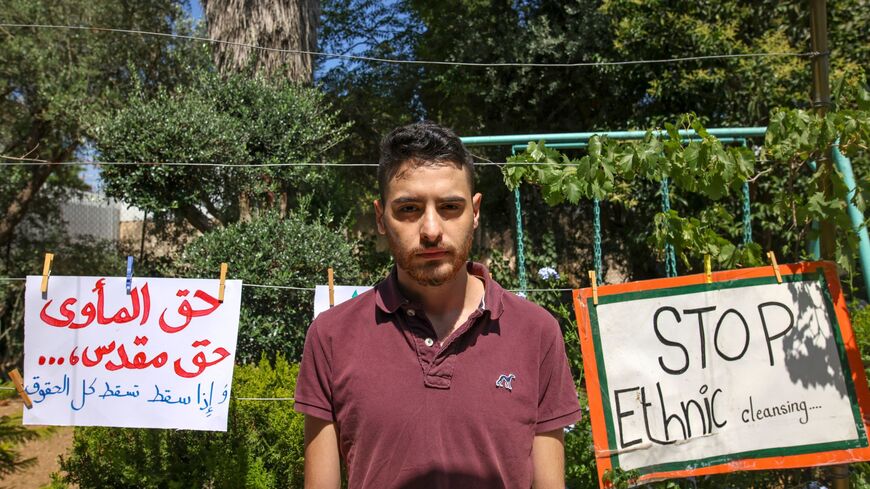 Palestinian poet and writer Muhammad el-Kurd, who publicized the loss of his home on social media, stands in front of banners in the annexed east Jerusalem neighbourhood of Sheikh Jarrah on June 2, 2021. The Arabic slogan reads: "The right to a home is a sacred right." The story went viral online after protests flared against the planned expulsion of Palestinians from houses there. - AHMAD GHARABLI/AFP via Getty Images

A leading human rights group accused Facebook on Friday of improperly removing pro-Palestine content from its platforms during the Israeli-Palestinian crisis in May.

“Facebook has suppressed content posted by Palestinians and their supporters speaking out about human rights issues in Israel and Palestine,” said researcher Deborah Brown from Human Rights Watch. “With the space for such advocacy under threat in many parts of the world, Facebook censorship threatens to restrict a critical platform for learning and engaging on these issues.”

Violence broke out in Israel and the Palestinian territories in May after tensions near holy sites in Jerusalem. Israel and Gaza-based groups battled one another, and there was also unprecedented violence between Jews and Arabs within Israel.

Much of the New York-based organization’s report focused on content removed from Instagram, which is a social media network for photos that is owned by Facebook. One user posted a picture with a caption reading, “This is a photo of my family’s building before it was struck by Israeli missiles on Saturday, May 15, 2021. We have three apartments in this building.” The post was removed for allegedly containing hate speech or symbols, according to Human Rights Watch.

In another example, Instagram allegedly removed a picture showing three New York Times headlines about the conflict with the caption, “never concede.” Human Rights Watch did not say what was in the headlines.

Human Rights Watch also cited a May report from 7amleh, which is a Haifa-based organization focused on Arab social media. The report alleged hundreds of restrictions by Facebook against Palestinian commentary on the conflict with Israel at the time.

Facebook has been accused of suppressing pro-Palestine voices the past, including by some of its own employees. In May, Facebook executives met with Israeli and Palestinian officials to discuss hate speech. Last month, Facebook’s oversight board recommended an independent review of the social media giant’s moderation of Israel and Palestine-related posts.