Syrian government soldiers were also killed in an explosion in central Syria. 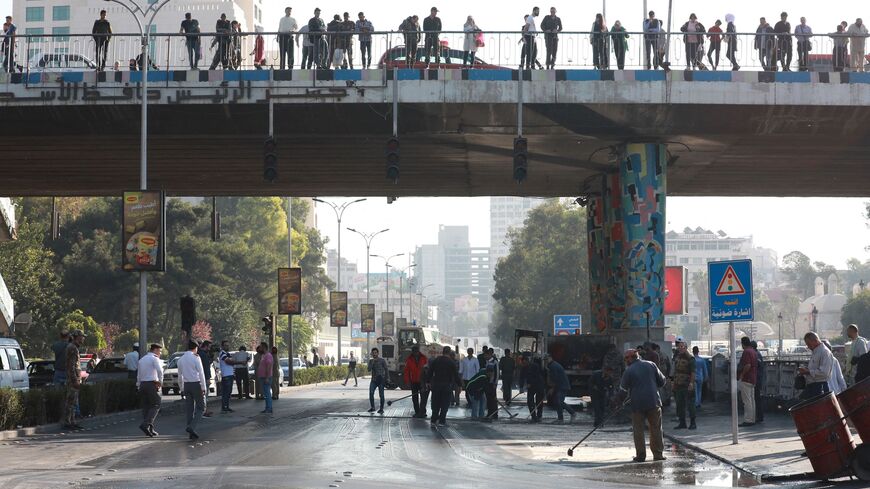 Onlookers watch from a bridge as Syrian municipal workers clean the site of an attack on a bus that was blown up with explosive devices in the capital Damascus on Oct. 20, 2021. - LOUAI BESHARA/AFP via Getty Images

A military bus exploded in the Syrian capital Wednesday, leaving more than a dozen dead.

Two explosive devices planted on the bus went off at 6:45 a.m. local time near a bridge in central Damascus, killing 14 and injuring more. Military engineers dismantled a third explosive device that fell off the vehicle, the official SANA news outlet reported.

Footage obtained by SANA showed the charred shell of a bus on a busy street.

Syrian officials did not immediately blame the attack on any particular group, simply saying “terrorists” were responsible.

Another military bus sustained an explosion in Damascus last August as well, killing one. Syrian officials said the incident was an electrical issue, but the al-Qaeda-affiliated rebel group Hurrays al-Din claimed credit for it.

The Syrian government controls most of the country, but its war with rebel groups is still raging in the northwest. The United Nations said Wednesday that four children were killed on their way to in the northwest Idlib province, per a statement sent to Al-Monitor. The government also retook parts of the south last month after a deal with rebel forces.

Pro-opposition Syrian news outlets also reported that six regime soldiers were killed in an explosion in the central city of Hama on Wednesday.