The exercise was held at a time of intensifying hostile rhetoric between Tehran and Baku, as Russia continues its cautious position in between. 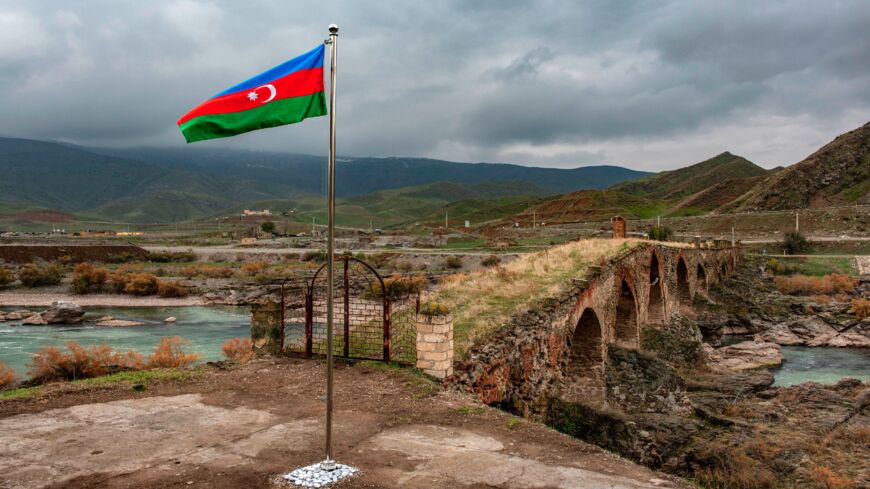 An Azerbaijani national flag flies next to the medieval Khudaferin bridge in Jebrayil district at the country's border with Iran, on Dec. 9, 2020. - STRINGER/AFP via Getty Images

The air force of the Iranian army launched a major drill on Oct. 21 involving several bases nationwide, the latest in a series of muscle-flexing gestures by the Islamic Republic in recent weeks.

Iranian media said the maneuver was carried out with a centralized command that coordinated operational units of electronic warfare, surveillance and information technology within one integrated system that also showcased reconnaissance equipment, including an advanced homegrown camera dubbed "Samat."

The drill organizers did not specify a threat or name any country. But in recent weeks, the Islamic Republic has been engaged in a bitter war of words with its northern neighbor, Azerbaijan. Iran has long expressed unease with Azerbaijan’s close ties to Israel. And recent reports that Baku was planning to purchase an Israeli missile defense system only stirred up the old concerns in Tehran. Iran’s leadership and commanders of the country’s Islamic Revolutionary Guard Corps have issued strongly worded statements against Baku, saying the neighbor is allowing Israeli influence and plots to be implemented in the region. Azerbaijan has dismissed such assertions.

While last week Iranian and Azeri foreign ministers agreed on de-escalation, there are still few signs that the two sides are effectively taking practical steps toward that goal.

During its war last summer with Armenia, Azerbaijan was believed to have deployed a wide range of Israeli-made drones, which helped it gain an upper hand in the six-week battle. Notably, during the aerial exercise on Thursday, Iran said significant focus was placed on testing and showing off multiple, domestically produced manned and unmanned drones.

Amid the ongoing tensions, both Iran and Azerbaijan have gone the extra mile to boost ties with Russia, especially militarily. In the latest, the chairman of the Joint Chiefs of Staff of the Iranian armed forces, Maj. Gen. Mohammad Bagheri, was in St. Petersburg where he reached "good agreements" with the Russian navy’s Deputy Commander-in-chief, Vice Adm. Vladimir Lvovich Kasatonov. Iran’s participation in future Russian drills was said to be part of those "agreements."

Yet as the Russian Federation stays on good terms with both Tehran and Baku, it appeared to be maintaining a policy of caution for now, weighing its options before eventually tilting the situation in the Azeri-Iranian tensions toward the best of its own strategic interests.