The exercise comes as Israeli officials are reportedly seeking assurances that the Biden administration is ready for joint operations should nuclear negotiations in Vienna fail. 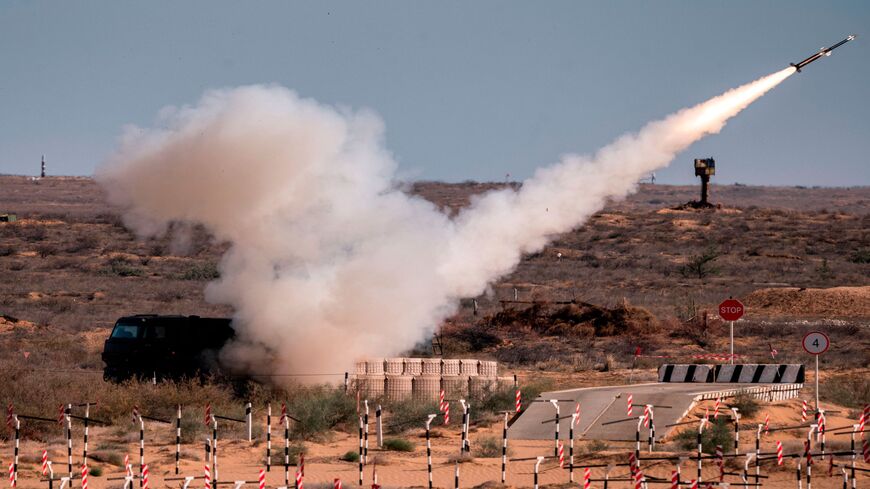 A rocket launches from a Pantsir-S air defense system at the Ashuluk military base in southern Russia on Sept. 22, 2020, during military drills that gathered China, Iran, Pakistan and Myanmar troops. - DIMITAR DILKOFF/AFP via Getty Images

The commander of the Iranian Army’s air defense corps, Brigadier General Alireza Sabahifard, told state television that the drills were successful, and that all weapons used were indigenously manufactured and “on the cutting edge of modern technology," according to Al-Jazeera.

Elements from the IRGC’s aerospace division and Iranian Air Force partook in the drills, which were based in the country’s air defense headquarters at Khatam ul-Anbia.

US officials have been hinting at impatience as the Iranian negotiating team under the new government of hardline President Ebrahim Raisi promises to return to Vienna “soon.”

Israeli officials have expressed concern that the Biden administration has not sufficiently planned potential joint operations should the negotiations fall short.

“No problem in the Middle East gets easier to solve with a nuclear-armed Iran,” Kirby said on Tuesday. “We’re putting a lot of effort and investment in these alliances and partnerships in the Middle East and we’re going to continue to do that, because while negotiations go on… we also have to make sure that militarily, that we’re able to meet our security commitments to our interests and to those of our allies and partners.”

Iran's exercise also comes amid a flare-up in tensions with Azerbaijan, which Tehran has accused of harboring Israeli military personnel – a charge Baku has denied.

Iran’s government has publicly blamed Israel for a series of alleged sabotage attacks against its nuclear facilities in recent years, as well as an assassination of the country’s top nuclear scientist, Mohsen Fakhrizadeh.

Iran’s government has continued to enrich uranium beyond limits set out by the 2015 international nuclear agreement. The violations, which have been publicly announced by Tehran, came after the Trump administration abandoned the multinational deal and imposed broad economic sanctions on Iran in 2018.

US intelligence assessments have repeatedly concluded that the sanctions regime have failed to roll back Tehran’s support for proxy militias and proliferation of conventional ballistic missiles and drones in the Middle East.

The Biden administration has made a return to the deal central to its Middle East strategy, as top policymakers look to disentangle the US from the region’s complex rivalries in order to focus on competing with a rapidly rising China.

Iranian officials have insisted their Islamic government views the use of a nuclear weapon as religiously forbidden and say the country’s nuclear program is for peaceful purposes. Still, the country’s leaders have vowed to defend their country against foreign attack.

Israeli officials during the government of Benjamin Netanyahu strongly opposed the 2015 agreement, even going so far as threatening to strike Iran militarily in what former US officials saw as a pressure tactic to get Washington’s attention. Biden administration officials have aimed to avoid such disputes by coordinating more closely with their Israeli counterparts.

Israel’s Foreign Minister Yair Lapid is in Washington this week for meetings with top US officials, including National Security Adviser Jake Sullivan.

Lapid, US Secretary of State Antony Blinken and United Arab Emirates Foreign Minister Abdullah bin Zayed are scheduled to meet tomorrow to discuss Washington’s efforts to convince Arab leaders to normalize ties with Israel, according to the State Department.

The rare meeting comes after the UAE, Bahrain, Morocco and Sudan agreed last year to recognize Israel under incentives from the previous US administration.