SDF transfers extremist IS women to Roj camp in Hasakah

The Syrian Demographic Forces moved 300 families of extremist women from al-Hol camp to Roj camp in Hasakah countryside, to confine them to one camp and control security in al-Hol camp. 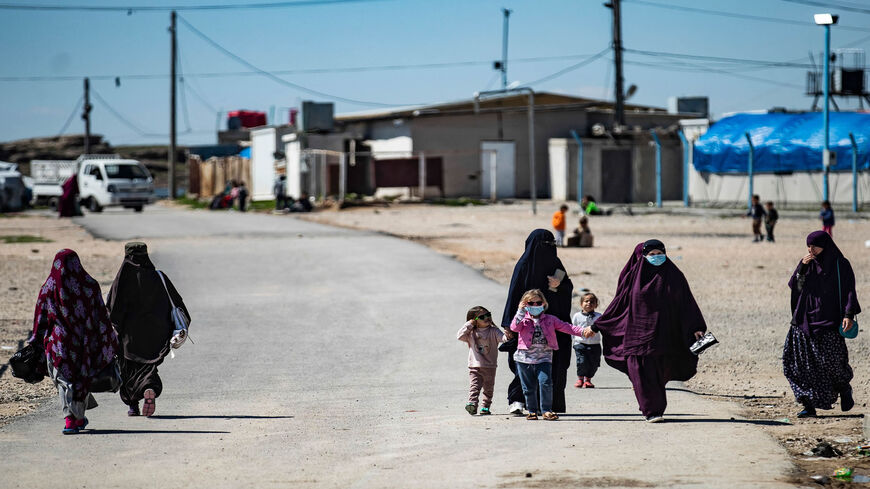 Women with children walk at Roj camp, where relatives of people suspected of belonging to the Islamic State are held, in the countryside near al-Malikiyah (Derik), Hasakah province, Syria, March 28, 2021. - Delil Souleiman/AFP via Getty Images

These women would carry out assassinations against anyone who opposes IS or cooperates with the SDF inside al-Hol camp. They are being transferred to Roj camp in Hasakah countryside to relieve pressure on al-Hol, which houses more than 64,000 people, most of whom are women and children.

These women tried to seize their only opportunity to escape by bribing the guards during their transfer since surveillance cameras have been placed along the camp’s fence and heavily armed men in guard towers are constantly on the lookout.

A report by Asharq al-Awsat website revealed that Roj camp includes about 800 IS families, most of whom hold European or American citizenship, in addition to a large number of Eastern European nationals, estimated at about 2,500 people. The camp, which was opened in 2015, is divided into two main sections. The first section includes a number of nonmilitant IS families who surrendered to the SDF after the latter took control of several villages and towns in northeastern Syria during its battles with the group. The second section of the camp includes the extremist women. The camp administration prevents extremist women from approaching the old section of Roj camp in order to avoid any revenge operations, as the old section includes some women who have abandoned the extremist group’s ideology, in an attempt to secure a way to return to their countries.

A woman in Roj camp told Al-Monitor on condition of anonymity, “I arrived in Syria with my husband at the end of 2014. My husband was an IS fighter at the time, and we traveled a lot between Syrian cities. He was killed in the battles in the Syrian Desert and I was left alone with two children. We managed to escape and made it to al-Hol camp. It was our only possible refuge where I could keep my children safe.”

She said, “We suffered from poor living conditions and lack of resources because we only received $300 per month. I was never OK with what my husband was doing. I was not happy with leaving my country when my husband joined IS, but I was forced to come to Syria with him.”

She noted, “The children and women did nothing wrong; why do they have to bear the consequences of their fathers’ and our husbands’ mistakes? I am a teacher with French citizenship, and I now live in an uninhabitable place. My daughter was born here and she has no legal documents. She will be deprived of her right to education because our country will not allow us to go back home. We were transferred to Roj camp, and there are many families who hold European passports here. But we are detained in a different section and prohibited from mixing with the rest of the camp residents because we are accused of being extremists.”

She added, “Sure, some women are extremists and have turned their tents into places where they hold secret seminars to teach children extremist ideology. But it is not OK to generalize. Our countries must save us and the tens of thousands of children here who live in poor conditions and are deprived of their rights. We all need psychological help so that we can overcome the traumatic events we have experienced.”

Al-Monitor contacted Berivan Khaled, co-chair of the Autonomous Administration of North and East Syria, but she refused to answer any questions.

The camps run by the Autonomous Administration in northeastern Syria suffer from a significant lack of health care and medicine, in addition to the absence of infrastructure and sanitation. Consequently, many diseases have spread inside these camps, resulting in the death of several children.

Orabi Abdulhay Orabi, researcher of Islamic groups, told Al-Monitor, “The families that are transferred to Roj camp are divided into two parts. First are the extremists that the SDF wants to control and expel from al-Hol camp, due to the large number of assassinations carried out there, which amounted to 40 last year. The camp has also received invasion threats and the SDF wants to remove foreign nationals from there. The other part is made up of women whose countries pressured the SDF to transfer them before evacuating them because health services and infrastructure in Roj camp are better.”

According to a June Lead Inspector General report, IS’ strategy aims to rebuild influence among the local population, and reestablish a self-proclaimed “caliphate” in the area.

Orabi believes that the Untied States has a strategic dimension in confining extremists to one camp, to use them as a pressure card.

Fadel Abdul Ghany, head of the Syrian Network for Human Rights, told Al-Monitor, “The transfers carried out by the SDF are racial discrimination based on nationality. The procedures must be fair for all. However, the SDF transfers foreign nationals supported by their countries to obtain better services in Roj camp. Arabs will remain in al-Hol camp, which is considered a detention center, since the SDF failed to manage it, while epidemics and diseases spread as a result of poor hygiene, corruption and lack of services.”

Meanwhile, the Autonomous Administration has repeatedly called on the concerned countries and the governments of the international coalition countries to take back their citizens from those camps.

The United Nations has also urged 57 countries to bring back their nationals without further delays. However, only a few European and Arab countries brought back a limited number of orphaned children.