Russia's invitation to the Taliban's since-canceled inauguration ceremony indicates a special relationship has developed between Moscow and the Taliban. 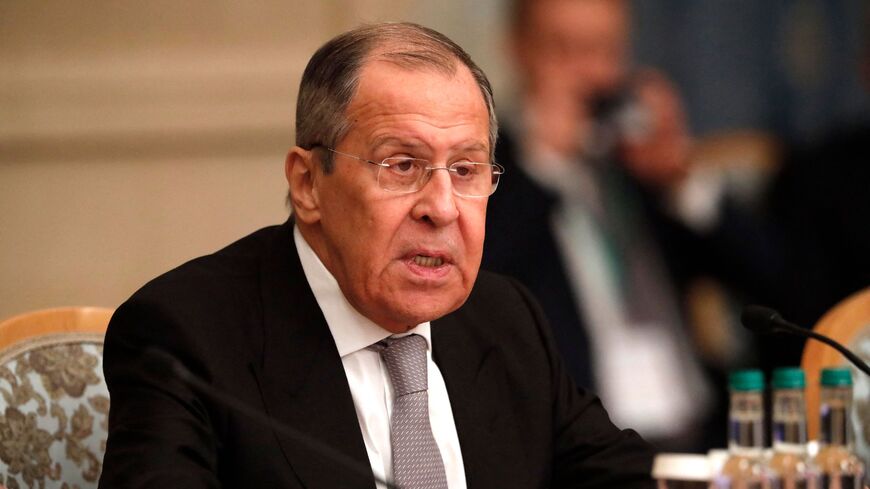 Russian Foreign Minister Sergey Lavrov addresses members of the US, Chinese, Afghan and Taliban delegations at the beginning of an international conference on Afghanistan over the peaceful solution to the conflict in Moscow on March 18, 2021. - ALEXANDER ZEMLIANICHENKO/AFP via Getty Images

Russia — along with Pakistan, China, Iran, Turkey and Qatar — was on a fairly short list of states invited by the Taliban to inaugurate their new government in Kabul on Sept. 11. The Speaker of the Federation Council (Russia’s upper house of Parliament) Valentina Matviyenko, said in a statement before the inauguration that diplomats would likely attend on behalf of Russia. According to her, representation was expected to be “at the level of ambassadors or other members of the diplomatic corps, no higher than that.” The Russian president's special envoy for Afghanistan, Zamir Kabulov, confirmed that the Russian ambassador in Kabul, Dmitry Zhirnov, would come to the ceremony. However, Foreign Minister Sergey Lavrov claimed that the Russian delegation would attend the event only if the Taliban government is inclusive.

Ultimately the question of whether Russian officials would arrive in Kabul was resolved by the Taliban themselves, who decided against an inauguration ceremony, instead just raising their flag over the presidential palace.

However, that Russia was invited to such an event indicates a special relationship has developed between Moscow and the Taliban. In addition, another sign hinting at the confidential nature of contacts between Moscow and the Taliban was the presence in early September of pro-Kremlin journalists from the Ministry of Defense’s pool in Kabul: Yevgeny Poddubny of VGTRK /Russia24 and Alexander Kots of Komsomolskaya Pravda. Both are known for their support of Russia's military operations in Syria and the activities of the forces allied with Moscow in Libya.

There was a political strategist in Afghanistan, Maxim Shugaley, who is associated with affiliates of Russian oligarch Yevgeny Prigozhin (who for a long time was held prisoner in a Libyan prison in Tripoli on charges of having ties to Seif al-Islam Gaddafi). The timing suggests they were tasked with creating a positive image of the Taliban movement among the Russian public.

This period of intensification of ties between Russia and the Taliban coincided with the preparations for the start of the Syrian military campaign by the Russian air force in 2015. It was then that Kabulov announced that Moscow and the Taliban were maintaining a communication channel. In turn, the Taliban issued a comment via Al Jazeera: “We are having talks [with Russia], but not about fighting [the Islamic State]. We want foreign forces out of our country. That is what we are talking about at the moment.” The movement confirmed Kabulov's comments about the existence of contacts at that time, although they denied that they affected the fight against IS.

Moscow began to rely on the Taliban as an effective force that could counter more radical groups such as IS, even while the American military contingent was in Afghanistan. The Taliban operation in August 2015 to destroy the Islamic Movement of Uzbekistan organization, which fell under the banner of IS and consisted of citizens of the Central Asian republics (millions of whose citizens are in Russia and Moscow fears their radicalization), resonated in the Russian capital. This act by the Taliban likely further convinced the Kremlin of the need to start building a dialogue with the group, which would be able to fill the security vacuum in Afghanistan when American troops left.

Relations between Russia and the Taliban began to progress during a period of worsening ties between Moscow and Washington against the backdrop of events in Ukraine. While Russia used the Syrian campaign to return to at least a limited dialogue with the United States, Moscow’s relations with the Taliban demonstrated the Kremlin's involvement in the failure of the American policy of “interference in the internal affairs of independent states and the imposition of values ​​alien to them,” so described by the secretary of Russia’s Security Council, Nikolai Patrushev. The Taliban, willingly or unwillingly, actually turned in the eyes of Russia into a national liberation movement fighting the American occupation, although formally they remain on Russian terror lists and are considered radical Islamists.

Another aspect that forced Moscow to begin to establish ties with the Taliban was the complete lack of understanding with the government of former President Ashraf Ghani, who replaced the government of Hamid Karzai, with whom the Kremlin had a constructive dialogue (recall Karzai's support for Russian steps toward Crimea). However, during the period of Ghani’s leadership, not only did the level of political interaction decrease, but many contracts were also revised, including those related to the purchase and maintenance of military equipment. Russia's contacts with the Taliban only increased the enmity between the two sides.

However, this was only the tip of the iceberg, and Kabulov expressed the whole essence of the misunderstanding between Moscow and Kabul ​​​​​​when he said that Ghani "fled the country in the most shameful way" and deserves to be brought to justice by the Afghan people.

Advertising its ties with the Taliban brought Moscow an unexpected propaganda effect. To some extent it allowed the Kremlin to save face before Sunni Muslims against backlash it had received over its military campaign in Syria, where various groups of Sunni Islamists also took stances against Russia. To a certain extent it also served to deflect the accusations of opponents who tried to tarnish the reputation of the Russian Federation to the Sunni world. Naturally, this primarily concerned Russia’s relations with the Sunni public, and not the ruling regimes of Muslim countries. Nevertheless, it had a positive impact on Moscow's dialogues with the leading capitals of Muslim states. It’s likely such bonuses were not planned by Russian diplomats, yet were welcomed nonetheless.

With the establishment of ties with the Taliban, the Russian side demonstrated that it is ready to act as a guarantor for its Central Asian allies and avert threats emanating from Afghanistan, and to stop the danger emanating from this country without the use of force, solely by seeking mutual understanding with the Taliban themselves. The latter also seem interested in strengthening ties with Moscow.

By launching a dialogue with the Taliban, Russia demonstrated that it did not see a future for the "pro-American government" of Afghanistan and was ready to work with all the forces of the country that had a real chance to come to power. Naturally, this meant primarily the Taliban. Now the Taliban movement, if the terrorist designations are removed from it, will be ready to become Russia's partner in Afghanistan, open up broad prospects for Moscow to strengthen its economic and even political influence in this country through soft power.

In turn, Russia's approach the victory of the Taliban opens up opportunities for Moscow to reposition itself in the Islamic world. Moscow's stake on a dialogue with the Taliban, launched six to seven years ago, has fully justified itself and Russia can try to turn this tactical success into a strategic breakthrough.

With regard to the economic component, here the main competition for Russia can be China, which long ago took a course toward building pragmatic relations with the Taliban. At the same time, if international sanctions against the Taliban persist, new opportunities arise for some Russian tycoons, for example,Yevgeny Prigozhin and Gennady Timchenko. They can apply in Afghanistan their experience of working in the "gray zones," in those states whose regimes are under sanctions or do not fully control the situation in the country. A number of Russian businessmen have similar work experience, for example in Syria, the Central African Republic and in eastern Libya, which is under the control of Khalifa Hifter.

Strategically, for Moscow, the Taliban precedent and interaction with it will also be important for the possible building of ties with other Islamic movements that could hypothetically end up in power in various states of the Middle East and North Africa. The Taliban could inoculate for Russia against fears of the Islamic threat and allow it to start dialogue with other groups that are considered radical and from which Moscow previously preferred to distance itself. Nevertheless, this scenario can only come to fruition after the conclusion of an internal discussion in Russia itself about how the Taliban should be perceived in the end. Despite the generally complimentary attitude of Russian state structures toward the Taliban, the influential the pro-Kremlin expert community remains seriously distrustful of both the Taliban and the possibility of interacting with similar Islamist forces.