Extreme heat, in addition to rising sea levels, is having an impact on antiquities and cities overlooking the Mediterranean in Egypt. 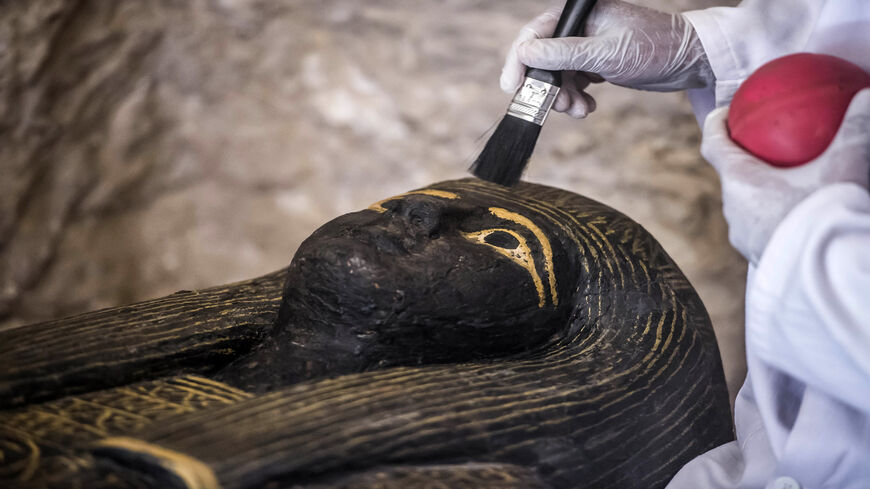 An Egyptian archaeologist brushes the top of a carved black wooden sarcophagus inlaid with gilded sheets, dating to Egypt's Late Period (7th-4th century BC), on the west bank of the Nile north of the southern city of Luxor, Egypt, Nov. 24, 2018. - Khaled Desouki/AFP via Getty Images

Egyptian archaeologists are sounding the alarm over the threat climate change and pollution are posing to the country's unique ancient heritage, with an increasing number of wildfires and rising sea levels presenting a risk to preservation efforts.

The Ministry of Tourism and Antiquities announced Aug. 14 that a fire broke out behind the archaeological area of Mit Rahinah in Giza governorate.

Ayman Ashmawy, head of the Egyptian Antiquities Sector at the Supreme Council of Antiquities, said the fire was brought under control without causing any casualties or losses to any antiquities. Ashmawy laid the blame for the blaze on the very hot weather — which had dried out vegetation in the area making it more susceptible to catching fire.

“The burning of weeds due to hot weather is not new. It has happened regularly in the area of various archaeological sites in recent years, especially in summer ​due to the rising temperature over the years,” Mamdouh Ouda, director of Risk and Disaster Management at the Ministry of Antiquities, told Al-Monitor.

“Due to high temperatures weeds are ignited spontaneously,” he said, noting that the weeds can be removed by spraying them with chemical materials. “But their roots remain and the high temperatures and humidity help them grow again.”

The Meteorological Authority announced Aug. 3 that it had conducted a study on the summer season of 2021 and compared it to the last five summers. The study revealed that the summer of 2021 is the hottest since 2017: Temperatures this year are higher than 2017 figures (which hovered around normal) with an increase of 3 to 4 degrees Celsius.

“The high temperature leads to dryness of the water content of these antiquities; it also leads to the expansion of inorganic materials. The cooler atmosphere leads to its contracting such as minerals and stones as well as wall inscriptions found in tombs."

Ouda noted that the state is keen to build more museums throughout the country in order to gather the country’s artifacts inside these well-equipped sites to save them from problems related to climate change.

“The artifacts displayed in museums are well preserved as the museums are equipped with air conditioning and set for adjusting temperature and humidity. But some sites cannot be preserved inside air-conditioned museums, such as tombs. [At these sites] the ministry engages in periodic maintenance and repair every six to 12 months,” he added.

In some cases, the state transfers ancient artifacts to other suitable places in order to save them, and that has happened in the case of the Egyptian Textile Museum.

As part of the state development of Historic Cairo, Sabil Mohamed Ali in Moez Street in Islamic Cairo was transformed into the Egyptian Textile Museum in 2010, the first textile museum in the Middle East. The sabil, or public fountain, was built by Muhammad Ali Pasha in 1820.

This specialized museum housed over 1,000 textiles from the Pharaonic era until the modern era, passing also through holdings from the Greek and Roman eras, the Coptic era and the Islamic era, as well as the holdings of the regions, the covering of the Kaaba, in addition to the imported textile department, such as the Iranian, Iraqi and Yemeni styles.

“The sabil was a narrow, closed place, and sometimes the air conditioning there didn't work. So in order to save the displayed textiles, it was transferred in 2020 to a larger place — the National Museum of Egyptian Civilization in Fustat.

In addition, the Egyptian Queen Nefertari tomb was recently renovated, as the colorful paintings inside it began to fade due to humidity and the increasing number of visitors.

The 3,000-year tomb, which is located 50 miles south of Cairo, is famous for its magnificent paintings with representations of Egyptian gods and Nefertari herself, who is depicted in unusually lifelike form. The vibrant colors of these illustrations vary between orange, blue and green.

Nefertari was a favorite spouse of King Ramses II. Her tomb is located in Luxor's Valley of the Queens and was discovered in 1904.

To protect the tomb following the restoration, authorities are limiting the number of visitors as well as installing monitors to track temperature and humidity levels.

Egyptologist Monica Hanna believes that the state should do more to preserve antiquities from damage.

“Our antiquities — most of which are made of stone — have been bearing high temperatures over thousands of years. Yes, the temperature is increasing, but the state can take measures such as restoration from time to time. But the pollution’s effect on antiquities is more dangerous as it has effects on the chemicals of the stone of these antiquities. So there should be an environmental policy to resolve this issue,” she told Al-Monitor.

Hanna noted, “The state should take measures to eliminate the pollution rates around archaeological sites — whether it is in water, air or the soil itself.”

In the coastal city of Alexandria, the Antiquities Ministry, in cooperation with the United States Agency for International Development and the National Authority for Potable Water and Sewerage, in 2019 restored the Kom El-Shokafa archaeological site, which was affected by underground water that threatened the relics in the catacomb due to increasing humidity in that area. This project to reduce the level of underground water helped save hundreds of rare relics from being inundated.

“The global warming that causes the rising sea level has a dangerous effect on heritage sites and cities overlooking the Mediterranean,” Egyptologist Hussein Abdel Bassir, director of the Museum of Antiquities of the Bibliotheca Alexandrina, told Al-Monitor.

Abdel Bassir gave an example of what happened to the 15th-century Qaitbay Fort. “The rising sea levels let the water sweep beneath the northern part of the fort, while waves hit the upper northern part. The movement of the sea has pulled sand away from the fort that threatens the stability of its structure."

He noted, “The ministry builds a lagoon between the citadel and the sea and an alternative shore to work as a buffer zone,” adding that in many other places in Alexandria such as Manshiya, one of the older parts of the city, the ministry erected huge concrete blocks to hinder water from covering the land.