Ethan Goldrich will take over for Aimee Cutrona as Washington's point person for Syria engagement, but there's no sign of a new approach by the Biden administration. 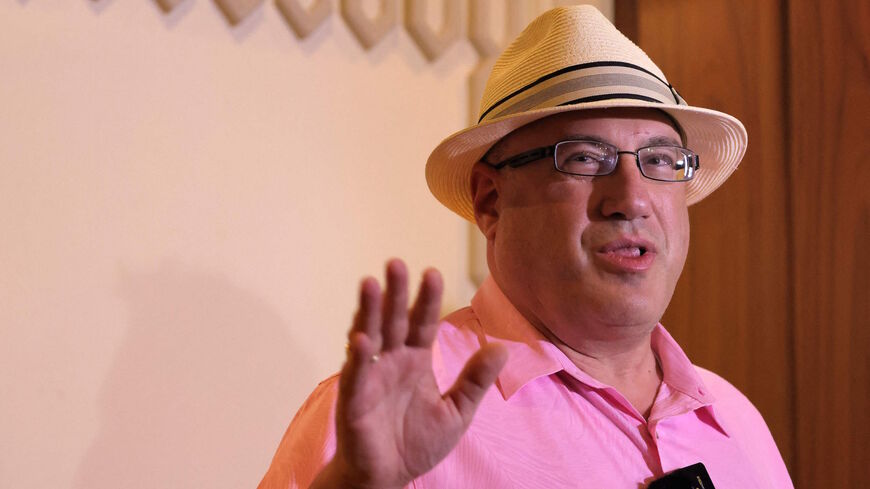 Ethan Goldrich, the US charge d'affaires in the United Arab Emirates, is pictured on Aug. 28, 2021, in Abu Dhabi as refugees who fled Afghanistan after the takeover of their country by the Taliban were gathering at the International Humanitarian City in the Emirati capital, waiting to be transferred to another destination. - GIUSEPPE CACACE/AFP via Getty Images

Ethan Goldrich, who previously served as the US charge d’affaires in the United Arab Emirates, took over Cutrona’s post as deputy assistant secretary for Levant affairs and Syria engagement on Monday, the State Department announced today.

Cutrona will take on a new assignment that will be made public in the future, a State Department spokesperson told Al-Monitor via email.

In his new role, Goldrich will also oversee the execution of the State Department’s response to Lebanon’s political crisis and economic collapse, as well as reinvigorated engagement with longtime ally Jordan, which faced an unprecedented alleged coup attempt earlier this year.

Yet as the new administration focuses on mending troubles at home and long-term preparations to head off a rising China, Washington’s Syria policy remains amorphous.

With the Islamic State (IS) largely defeated and President Bashar al-Assad in control of much of the country, the war’s remaining redoubts are frozen in stalemate. Meanwhile, indirect US negotiations with Iran, a key player in the conflict, have stalled.

On the strategic level, however, the policy remains under review. Biden administration officials have so far not departed from the Trump-era approach of indefinitely leaving US troops in the country following the territorial defeat of IS.

Some 900 US troops occupy a swath of Syrian territory in support of local Kurdish-led militias who bore the brunt of the war against IS. Together they maintain security in a region home to some 4 million Syrians, while also keeping a lid on makeshift prisons that hold thousands of IS fighters captured in battle.

The policy to leave US troops in post-IS Syria was devised under the auspices of former Secretary of State Mike Pompeo as Trump administration officials saw in the country’s stalemated battlefield an opportunity to deny Russia and Iran — Assad’s main foreign backers ­— a clean victory in the region.

Trump sought repeatedly to undo the policy and pull US forces from the country, citing what he called “endless war.” Top advisers pushed back on those orders, however. Outrage from some US officials over Turkey’s attacks against Kurdish-led forces amid Trump’s October 2019 withdrawal order led the former president to reverse his decision.

Biden administration officials have indicated US troops are not leaving Syria anytime soon and have added new sanctions on the Assad regime. Washington continues to insist the regime implement reforms in line with UN Security Council Resolution 2254 calling for free and fair elections in Syria.

Meanwhile, Arab governments are exploring options for normalizing ties with the Assad regime, despite warnings of potential US sanctions from Washington.