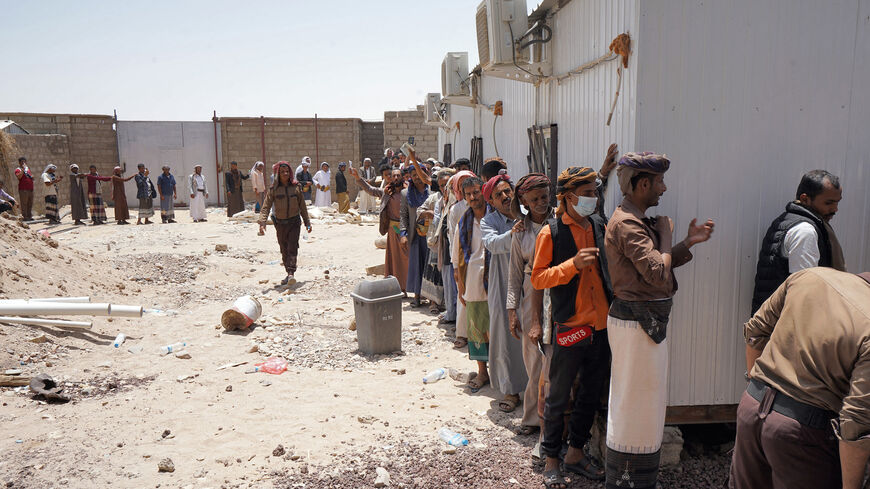 People queue to receive a dose of the Oxford-AstraZeneca COVID-19 coronavirus vaccine at a vaccination center on the outskirts of Yemen's embattled province of Marib in the country's northeast, on July 7, 2021. - AFP via Getty Images

Ninety-nine percent of Yemenis are unvaccinated against COVID-19, Oxfam said Wednesday, as the region’s poorest country battles a third wave of the virus.

Less than 1% of Yemen’s population of 30.5 million has received one dose of the vaccine and just 0.05% is fully vaccinated, the aid agency said.

As cases surge, Yemen faces a crippling shortage of vaccines. The global COVAX initiative, which is Yemen’s only source of vaccines, has sent the country just 511,000 of the 4.2 million doses it has pledged to deliver.

“Vaccination is a simple solution that would save lives, but the international community is failing the people of Yemen who need doses now,” said Muhsin Siddiquey, Oxfam’s country director in Yemen.

Siddiquey called it “shameful” that some high-income countries oppose waiving patent protections on COVID-19 vaccines, which could help lower prices and accelerate the distribution of doses to poorer countries.

“Having bought up all the vaccines for themselves, rich countries like the UK and Germany are blocking the solutions that would see the rights and recipes of these lifesaving vaccines shared so that more can be produced for countries like Yemen,” Siddiquey said in a statement.

“Protecting lives should be more important than protecting the outsized profits of pharmaceutical corporations who have already made billions from this crisis,” he said.

In the last month, the number of recorded coronavirus cases in Yemen has tripled, the aid agency said. At 1,649, the death toll from COVID-19 has increased by 420% since August.

Oxfam notes that there are also countless unrecorded deaths due to a shortage of tests and hospital beds. Coronavirus data is also not available in Houthi-controlled northern Yemen, where the rebels have been accused of covering up the scale of their outbreak.

“Yemen has one of the highest COVID fatality rates in the world – it simply can’t cope with this virus,” said Siddiquey. “Many people are very weak because they can’t afford to feed themselves properly or to buy basic medicines. Others are unable to afford the cost of transportation to a medical center because of the ongoing fuel crisis."

The healthcare system has been decimated by seven years of war between the Iran-aligned Houthis and the Saudi-led coalition fighting to restore the government. According to the United Nations, two out of three Yemenis lack access to healthcare services.

By 2018, health facilities in Yemen had been targeted with airstrikes and artillery attacks at least 120 times by the conflict’s warring parties, according to a report from the New York-based Physicians for Human Rights and the Yemeni human rights group Mwatana.

The hostilities are currently centered in Marib, where the Houthis earlier this year launched an offensive on the Yemeni government’s last stronghold in the north. Oxfam reports conditions in the displacement camps are dire, with many people lacking access to clean water, sanitation facilities or health services.