Doctors Without Borders says it has witnessed the highest death rate yet from the virus in the Houthi-held city of Sanaa. 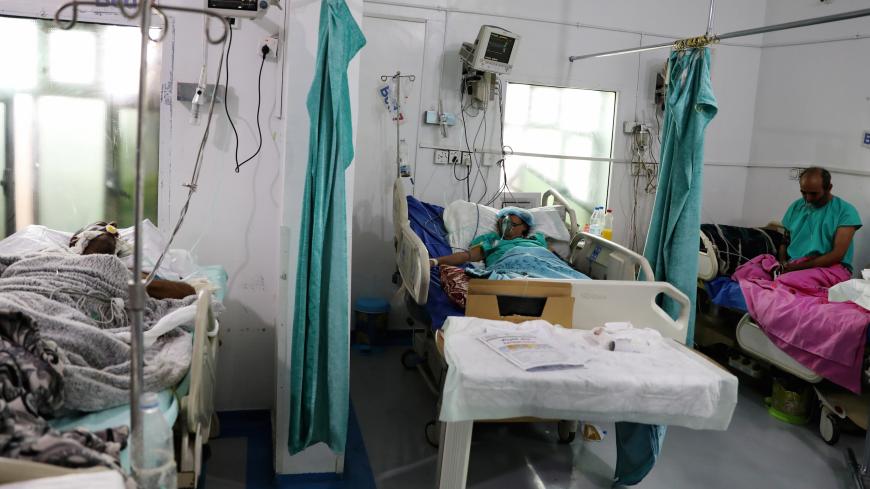 People recovering from the coronavirus disease are seen at a quarantine ward of a hospital in Sanaa, Yemen, June 11, 2020. - REUTERS/Khaled Abdullah

The coronavirus is spreading undetected throughout all of Yemen, causing the "complete collapse" of the health care system, Doctors Without Borders warned Thursday.

The medical charity said it has treated hundreds of patients with respiratory symptoms in its COVID-19 centers in Sanaa and Aden, many of whom “die in a surprisingly short amount of time.” The organization says hospitals aren’t just suffering from a lack of medicine and equipment, but a shortage of doctors and nurses willing to treat the disease.

Doctors Without Borders has tracked the highest number of deaths in the Houthi-held capital, Sanaa, where the charity says the 15 intensive care unit beds have been full for the past month.

“There has been a strange mixture of fear and denial about the virus here,” Claire HaDuong, Doctors Without Borders’ head of mission in Yemen, said in a statement. “People haven’t wanted to accept the possibility that it could arrive, or that it was already circulating.”

Yemen’s Aden-based government has registered close to 600 cases and more than 100 deaths from the virus. Houthi officials in the north, who have confirmed just four cases and one death, have denied accusations they are covering up the scale of their outbreak.

The country’s health system has been devastated by five years of conflict between the Saudi-backed military coalition fighting to restore the government and the Iran-aligned Houthi rebels. Health care facilities in Yemen were targeted at least 120 times by the conflict’s warring parties between 2015 and 2018, according to a report from the New York-based Physicians for Human Rights and the Yemeni human rights group Mwatana.

The growing number of coronavirus cases comes as the United Nations warns it may be forced to shutter three-quarters of its assistance programs in the country without a fresh injection of cash.

A pledging conference earlier this month raised $1.35 billion from international donors, but that was far below the $2.4 billion the UN said it needed to keep its Yemen programs afloat. Of the promised funding, only 47% has been received, the UN says.