Turkey, which already hosts more than 300,000 Afghans, has warned it doesn't have the resources to accept additional migrants from the war-torn country. 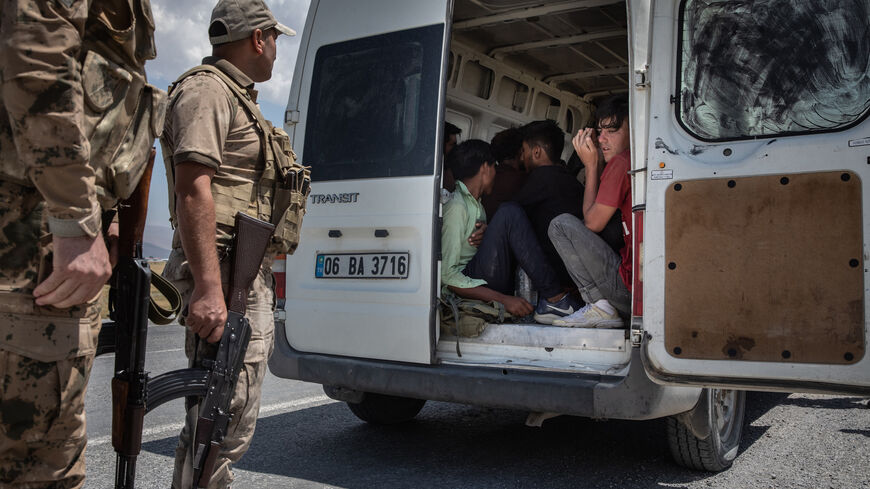 Jandarma officers monitor Afghan migrants sitting in the back of a smuggler's van that was caught transporting them from the Turkey-Iran border on July 10, 2021, in Caldiran, Turkey. - Chris McGrath/Getty Images

“As Turkey, we have sufficiently carried out our moral and humanitarian responsibilities regarding migration,” Cavusoglu said in a joint news conference with his German counterpart, Foreign Minister Heiko Maas.

“It is out of the question for us to take an additional refugee burden,” Cavusoglu said in Turkey's southern Antalya province.

Turkey hosts the largest number of refugees worldwide, including more than 3.7 million registered Syrians who were granted protection from their decade-long civil war. At more than 300,000, Afghans already make up Turkey's second-largest refugee population.

Since 2016 the European Union has provided billions of euros in exchange for Ankara preventing Europe-bound refugees from leaving Turkey’s borders.

But in recent years, public attitudes toward refugees have soured in Turkey. Last week, Turkish President Recep Tayyip Erdogan assured the public, “Turkey does not have any obligation whatsoever to be a safe haven for Afghan refugees.”

Amid the surge in Afghan refugees, Turkish border police have stepped up surveillance and deportations along the country’s southern border. Neighboring Greece constructed a 40-kilometer (25-mile) fence to deter Afghans who have escaped their country.

Turkey, which is NATO’s only Muslim-majority member, is still weighing the request. Erdogan said Sunday that his country will maintain a diplomatic presence in Afghanistan but cast doubt over the Taliban’s airport proposal.

“How would we explain it to the world if you took over security and there is another bloodbath there? This is not an easy job,” Erdogan said.

The Islamic State’s affiliate in Afghanistan, ISIS-K, claimed responsibility for a pair of deadly bombings outside the airport on Thursday. The death toll has risen to at least 169 Afghans and 13 US service members.